Local gold miners continue to prove there is still money to be made in Western Australia’s resources playground, with Northern Star Resources, Metals X, Ramelius Resources and Saracen Mineral Holdings all closing higher on the ASX. 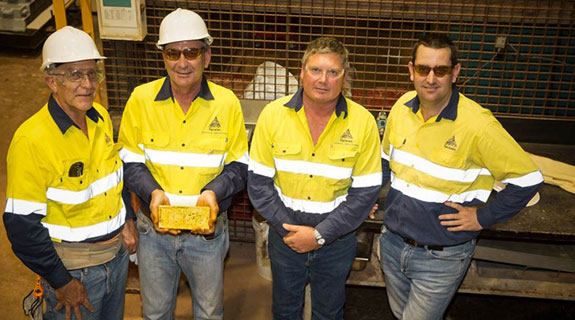 Local gold miners continue to prove there is still money to be made in Western Australia’s resources playground, with Northern Star Resources, Metals X, Ramelius Resources and Saracen Mineral Holdings all closing higher on the ASX.

Northern Star posted a 79 per cent rise in profit to $65.1 million for the six months to December, with revenue up 3 per cent to $425.3 million.

The company also declared a 50 per cent increase in its interim dividend to 3 cents per share, fully franked.

Its all-in sustaining costs for the half-year were $1,062/oz.

“These results demonstrate the cash generating capacity of Northern Star based on our current production rate of about 570,000oz a year,” managing director Bill Beament said.

“But more importantly, they highlight the free cashflow Northern Star is set to generate as production grows to 700,000oz a year over the next two years.

“At the same time, we retain a conservative approach to our balance sheet and, importantly, we have ample cash to fund our outstanding organic growth opportunities,” he said.

Ramelius Resources also released its half-year report today, announcing an 8.7 per cent increase in revenue to $75.8 million and a massive 461.5 per cent surge in net profit to $21.9 million.

However, the company declared no interim dividend for the half-year.

Saracen Mineral Holdings also delivered good news today, announcing it had poured first gold at its $65 million Thunderbox project just 10 months after the company’s board approved development of the project.

“Thunderbox gives us the level of production and cashflow sought after by international investors while enabling us to remain debt-free,” Mr Finlayson said.

“The potential +10-year life of Thunderbox and the exploration upside at both Thunderbox and Carosue Dam means we have a sustainable production profile with strong growth prospects.”

Meanwhile, Metals X was unable to celebrate with its gold mining peers today after revealing a 94.9 per cent slide in net profit to just $812,341 for the six months to December, with revenue down 2 per cent to $146.3 million.

The slide in profit was on the back of higher costs of deeper underground mining, post-fill requirements and an increase in amortisation rates at its Higginsville gold operation, coupled with similar cost increases at its South Kalgoorlie operation.

The company paid out a 2.95 cents per share dividend for the full 2015 financial year.