Gold gets its mojo back

ANALYSIS: It’s not often that hyperbole merges with reality when it comes to resources, but WA’s gold sector has just thrown conventional wisdom out the window. 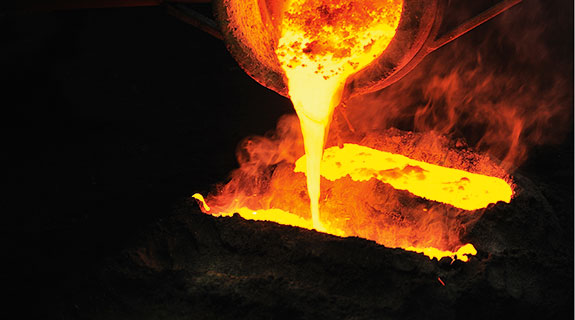 Gold has benefited from a combination of a rising price when measured in $US and the magnifying effect of a lower Australian dollar.

ANALYSIS: It’s not often that hyperbole merges with reality when it comes to resources, but WA’s gold sector has just thrown conventional wisdom out the window.

Western Australia’s gold sector has never had it so good.

A near-record high price, falling costs, and the first signs of a fresh influx of capital to fund new mine developments are restoring gold to its status as the state’s most profitable business.

Iron ore and petroleum products such as liquefied natural gas and oil might generate more revenue, but both are weighed down by low prices, which have cut profits and in some cases forced project closures.

Gold, on the other hand, has benefited from a combination of a rising price when measured in $US and the magnifying effect of a lower Australian dollar, which a few weeks ago delivered a record high $A price of more than $1,770 an ounce. 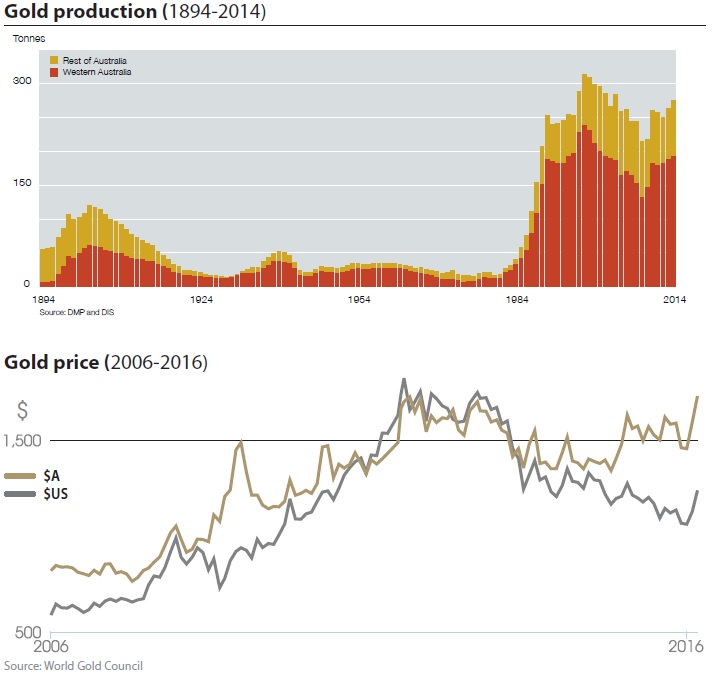 The price has slipped in recent days but, at $A1640/oz, it remains close to an all-time high, reinforcing a view that if a gold mining company can’t generate a handsome profit at that price, it ought to do something else.

Cutbacks in the iron ore and petroleum industries have also boosted the case for gold by flooding the market with skilled labour and professional services, as well as surplus equipment and spare parts.

In some cases, wages for mining specialists and process-plant operators have been halved, though that probably represents a fall from boom-time highs to a more normal level of pay.

The net result of the high gold price and lower costs is that most of WA’s gold mines are operating on their highest-ever profit margins, with some generating earnings of more than $1,000/oz.

Little wonder, then, that several new gold mines and successful fund raisings have been announced during the past six months, including Gold Road Resources’ $455 million Gruyere mine, Blackham Resources’ $32 million redevelopment of the Wiluna project, and Talisman Mining’s oversubscribed $16.7 million raising for the Monty copper and gold project.

If current conditions continue (and there’s never a guarantee that good times will last), more capital will flow into the industry as investors move to secure a position in the revival of the WA gold industry.

The improved tone in the gold sector of the stock market can be seen in the share prices of ASX-listed stocks, with most recently hitting 12-month share price highs, including some making a return from a near-death experience.

Silver Lake Resources is a prime example of a gold miner hit by high costs, a falling $US gold price, a high $A, and a mistimed diversion into copper exploration. The result was a share price crash from $3.96 three-and-a-half years ago to a low of 12.7 cents last September, before rebounding to recent sales at 34 cents and a 12-month high two weeks ago of 38 cents.

Looked at from a negative perspective and it can be argued that Silver Lake’s share price has fallen by 91.4 per cent since its 2012 peak; but viewed another way and the stock is up by 167 per cent in six months.

What interests investors is that Silver Lake has made a return as a pure-play gold producer focused on WA’s eastern Goldfields, with a plan to produce up to 135,000oz of gold a year at an all-in sustaining cost that has been cut back to $1,280/oz with a target of $1,000/oz. The result has been a strong increase in profit, an accelerated exploration program, and a series of mine development options.

It’s not alone. Other local gold success stories include Saracen Mineral Holdings, which bought the mothballed Thunderbox goldmine from Russian nickel miner Norilsk, redeveloped the mine, poured first gold last month and has enjoyed a 193 per cent share price rise from 33 cents to 97 cents.

St Barbara, despite being a Melbourne-based company, owes much of its spectacular 1,095 per cent share price rise (from 21 cents at this time last year to recent sales at $2.51) to the redevelopment of one of WA’s oldest goldmines, the Gwalia project near Leonora.

In some ways what’s happening in gold is a case of history repeating, because it was gold that did more than any other industry to shape WA as it is today – a cash-generating powerhouse where 11 per cent of the national population produces 40 per cent of the country’s exports.

While iron ore and petroleum dominate the current value of commodity production, it was gold that launched the state’s resources industry in 1892, lifting WA out of near-bankruptcy and laying the foundations for everything that followed.

Gold also saved WA from the worst effects of The Great Depression of the 1930s, and played a leading role in the rapid economic development of the 1980s.

Whether there is a fourth gold boom getting under way is hard to judge, but the fat profit margins and increasing levels of activity in the sector are an indication that something big might be brewing with gold once again, leading the way towards a more widespread resources recovery after five years in the doldrums.

A hint of what’s coming can be found in the gold production and revenue numbers. Two years ago, in the 2013-14 financial year, WA produced 195.9 tonnes of gold worth $8.9 billion. Last financial year, gold output slipped to 191.4t but the value crept up to $9 billion.

Output in the current financial year is expected to have resumed a rising trend while revenue should top the $10 billion mark, good enough to ensure that gold retains its third ranking by value in the commodity pecking order – after iron ore at $55 billion and petroleum (LNG plus oil) at $22 billion. 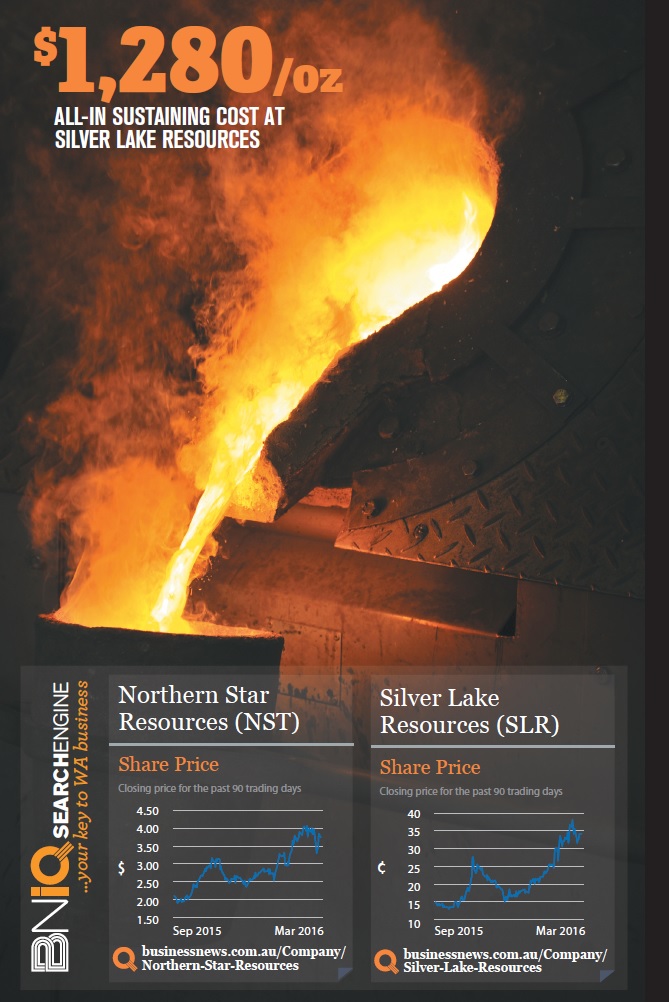 But behind those revenue numbers there is the important matter of profitability, with gold profits rising as iron ore and petroleum profits are flat or falling.

High share prices are one measure of the gold resurgence, with most ASX-listed gold miners trading close to 12-month highs; field activity, which has produced a flood of encouraging exploration results, is another.

Some of the best recent discoveries have been close to existing mines, including the Velvet structure adjacent to the Kanowna Belle mine near Kalgoorlie. With drill intersections that include 24.5 metres at 30.6 grams per tonne (close to the old magic number of one-ounce to the ton), Velvet will be a highly profitable project for its owner, Northern Star Resources.

In some ways the success of Northern Star at Kanowna Belle and its string of other gold mines highlights what’s happening in WA’s gold industry.

Once a penny dreadful, Northern Star picked the perfect time to expand, snapping up a string of assets from other miners, mainly overseas based, which were being forced out of the industry by high debt levels and thin margins when measured in $US.

Today, Northern Star is one of the top 150 companies listed on the ASX, with a market value of $2.3 billion.

Perhaps more importantly, Northern Star is not alone, though it is easily the biggest of the locally based gold producers.

The title of state’s biggest goes to the Boddington mine of US gold leader Newmont Mining. Production at the mine, located in the state’s South West, is 12.3 per cent of WA’s annual gold output, at 23.6t a year.

The Kalgoorlie Superpit (half Newmont and half Canada’s Barrick Gold) has annual production of 18.2t and second ranking, followed by Newcrest Mining’s Telfer mine at 16.2t, the Tropicana mine of AngloGold and Independence Group at 15.3t and the St Ives mine of Gold Fields near Kambalda at 11t.

Two critical elements underpin the revival of WA’s gold industry – the price as measured in $US, and the value of the $A.

For local miners, the best possible conditions involve a rising $US gold price and a falling $A, whereas moves the other way spell trouble.

Guessing what comes next is tricky, but it seems more likely that the $US gold price will continue to strengthen if alternative investments remain unattractive and global interest rates remain low, which means investors are attracted to gold as a safe haven.

Based on this country’s declining terms of trade the $A should be falling; but it has been rising recently thanks to an ongoing currency war in which a number of countries are trying to depress their exchange rate as a means of boosting exports.

If the currency war persists and financial markets are further destabilised – by events such as Britain quitting Europe or a fresh outbreak of the Greek economic crisis – then gold could shift sharply higher.

Analysed virtually anyway, the outlook for gold in WA is the brightest for more than a decade.