Going it alone in GST battle

WA’s strong economy make it an outlier nationally, as eyes turn to an upcoming federal election. 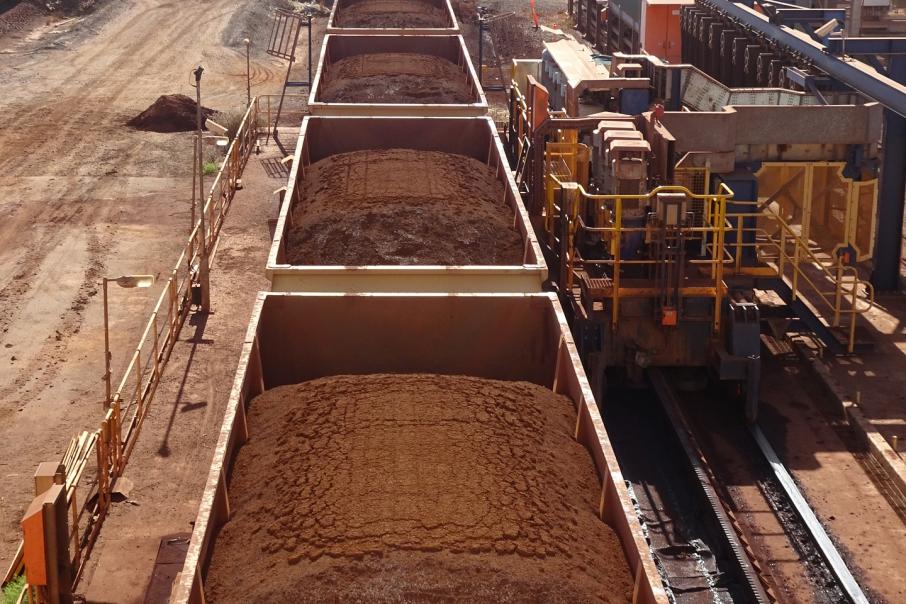 WA’s iron ore producers have benefited from the extraordinary prices.

The economic success generated by Western Australia’s isolation from the rest of the country may backfire if we are not careful.

It seems clear to me that other states are enviously eyeing how this state has ridden the COVID-19 pandemic so far, and the comfortable position in which the WA government finds itself in terms of finances.

WA’s success has not all been due to strict borders.

The global pandemic has prompted massive stimulus and that has fed demand for steel, notably in China.

At the same time, difficulties have been experienced by rival exporter Brazil, where a combination of a catastrophic dam failure and the huge impact of COVID on its workforce have reduced global supply.

WA’s iron ore producers have benefited from the extraordinary prices this has driven.

As a result, the state government has experienced a boom in royalties. In the 2019-20 financial year, state royalties from iron ore amounted to $7.8 billion, almost 30 times what they were in the 1999-2000 financial year.

If we restated that historic data in current day terms, it would still be 17 times the value. 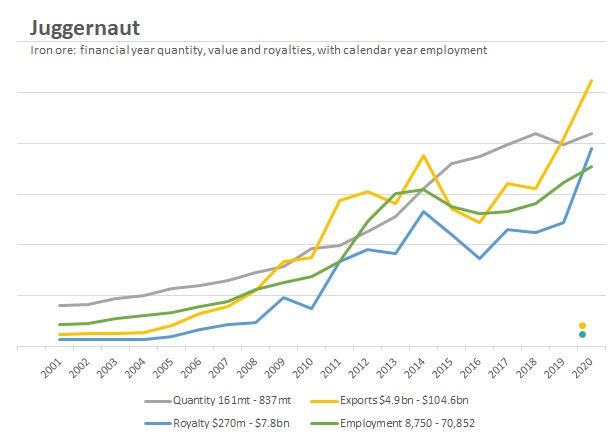 In the graph above, it should be noted that the dots show where the 2001-dollar values would be if they had risen at the same pace as inflation, assuming all other things stayed equal.

During the past boom, and especially in the downturn that followed, WA squealed loudly about the unfair impact of this royalty stream and other factors when the GST distribution was calculated.

As a result, and with a federal election looming, a new floor for WA was put into the GST allocation, so that WA could not receive the parsimonious grants of previous years.

With WA’s mining sector in a downturn at the time and expectations of a long, slow return to buoyancy in the cycle, the renegotiated GST allocation was not a particularly difficult thing to offer WA. But COVID-19 has changed all that.

Suddenly it’s boom times again and, just like the post-GFC stage of the mining boom, WA is out of sync with most of the rest of the country; this time because the biggest states of Victoria and NSW are suffering economically and socially from lockdowns.

As premiers in populous, vote-rich states eye their own fiscally restrained circumstances and notice there’s a federal election looming, there are growing murmurings that WA has it too good.

That is underlined when other states perceive that our state won’t play ball when it comes to honouring agreements about opening up as vaccination rates increase.

Here, I am seeing the reverse of tactics used when WA was arguing its case to retain more GST.

For instance, note the coverage of BHP’s release of its royalty payments for the 2020-21 financial years, which show that WA receives about 75 per cent of the $4 billion the company pays in royalties (not just iron ore) and other state and federal payments, excluding corporate taxes.

BHP royalty payments in the most recent financial year were up around 30 per cent, underlining WA’s own budget results and forecasts released earlier this month.

WA is forecasting royalties to rise by a staggering $4.6 billion in 2022, almost entirely due to iron ore.

All this will leave Prime Minister Scott Morrison in a quandary.

National unity was the early success story in the pandemic crisis, but that has mostly been eroded.

The descent into partisan politics, both along party and geographic lines, may be unseemly but it’s a natural consequence of politics and its specialisation: the blame game.

Mr Morrison, a Liberal, can probably thank his GST deal for remaining in government, as he preserved his stronghold in WA.

But Labor Premier Mark McGowan won a sweeping victory here in the state election over his handling of the pandemic and remains enormously popular.

It is hard to judge how much that state victory will affect the federal government’s chances of re-election, but it is possible the Liberals in Canberra might decide that WA is a lost cause and salvaging seats in bigger states is easier.

No matter how difficult renegotiation is, the awkward politics of this situation could make the GST allocations, and the billions at stake, a pressure point when it comes to many other decisions that will be made as Australia attempts to open, domestically and to the world, and the federal government campaigns to stay in charge.