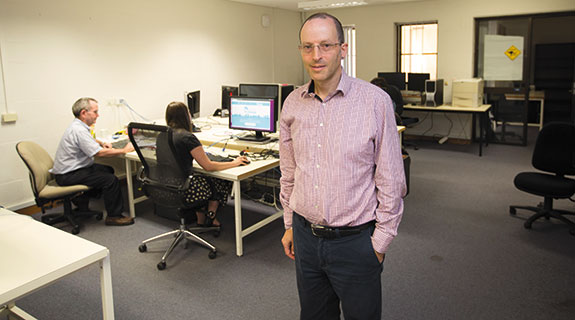 FIT FOCUS: David Glance is hoping to collaborate with a range of companies and research institutions for the Perth Activity Challenge. Photo: Attila Csaszar

UWA researchers are organising a mass activity challenge in Perth to encourage greater fitness and wellbeing, and provide researchers with insights into what motivates people.

MORE than 5,000 people will use the City of Perth as their personal gym and wellness facility when they take part in a massive group activity challenge starting this month.

The City of Perth Activity Challenge has been organised by Self eHealth, a software and research company based at the University of Western Australia.

A range of companies and government departments will be involved, including UWA, City of Perth Library, the Heart Foundation, the Department of Health, Royal Perth Hospital, IT Vision, SNAP Fitness, and consultancy Embodied Health.

People living, working or studying in the city and its surrounds can register as an individual or as part of a team, and Self eHealth will use the mass fitness and health challenge to research the motivation techniques that encourage healthier practices over the long term.

Self eHealth director David Glance told Business News the program would run for 12 weeks and encourage participants to walk 10,000 steps a day and take part in other free wellness activities, such as healthy eating and cooking classes, yoga and pilates sessions, and guided heritage walks.

“We’re really hoping to get people to engage with the city. There will be various walks that the historical and cultural people at the City of Perth are putting together,” Dr Glance said.

“And this is the first time Perth is doing something (of this kind) which Melbourne hasn’t done first.”

Dr Glance said his team will follow up on participants’ progress in the three-month challenge at six and 12-month intervals to see whether they’ve kept up their new regimes.

“What we’ve noticed is, like everything else – diets, gyms, any type of exercise program – people start and then give up,” he said.

“So what we’re looking at is how we can actually make these things (into) behaviours and support the motivational aspect of changing health behaviours to improve health and wellbeing.

“The challenge is to get people involved in a set of activities and it’s things that governments around the world are trying to get the public to do, but in Australia this is a first of its kind doing the prolonged activity challenges with the general public.”

The activity challenge will require participants to track their activity with wearables such as fitbits, using either their own device or buying one at a discounted rate as part of registering for the challenge.

Dr Glance said that through the use of technology such as wearables, and a focus on mass activities that used peer encouragement and competition, Self eHealth hoped to gain insights into how best to tackle the growing problem of community-scale poor health.

“We’re looking at how we can actually help consumers manage their own health because it’s becoming increasingly difficult for doctors to manage chronic disease, and it’s a thing that has to be tackled at a population level by changing behaviours,” he said.

Dr Glance said Royal Perth Hospital staff had indicated they would be comparing their results to those of Sir Charles Gairdner Hospital employees, and he hoped companies from a range of sectors would get involved in some healthy competition with rival peers.

He said incorporating a competitive aspect had proved a successful motivator at previous Self eHealth-run challenges, which pitted UWA departments against each other, and he planned to set up a university challenge for all major institutions in May.

“And it fosters collaborative research.”