The Matera brothers are quietly going about their business, building partnerships and mentoring indigenous youth. 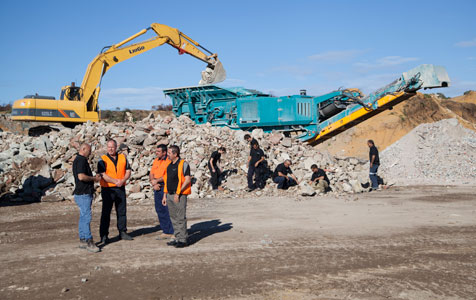 Peter Matera (left) with Dave Markham, Mario Giovanazzo and Ray Gulloto from Capital Recycling, which has a partnership with Matera 3. (Photo: Attila Csaszar)

The name Matera might be best known for the Australian Rules football success with which it associated, but it is the business world where it is coming to a new level of prominence.

Four of the seven brothers from the country town of Wagin are involved in two businesses that bear the Matera name.

Former West Coast Eagles player Peter Matera, along with his brothers Michael and Gerard, have gone into the waste and training fields with their business, Matera 3.

That is not to be confused with construction-focused services and supply company Matera Group started by another brother and AFL footballer, Phil Matera.

Both companies are happy to trade off the footballing stardom of their founders, but they also highlight their indigenous roots.

As a result the businesses are seen in the community as role models for indigenous entrepreneurship, including by the state government.

Matera 3 started almost three years with a truck and a few skip bins. It now has nine trucks on the road and a few more set to arrive, as well as a dedicated resource recovery facility near Rockingham, which handles waste construction and demolition industry.

Michael Matera, the oldest of three, already had experience running a materials logistics business and heads the operational side of the company. Gerard runs the back office and Peter is most heavily engaged in marketing.

Gerard told Business News that Matera 3 had developed some significant partnerships in the waste sector in Perth and, more recently, the Pilbara, which underscored the business’s credentials and provided expansion opportunities.

He said the business was in partnership with Capital Recycling in the metropolitan area, and was in the early stages of a joint venture deal with multinational waste giant Veolia Environment Services.

The latter involves a heads of agreement for all waste management works in the Pilbara, with a more formal joint venture agreement awaiting final ratification by the parties.

It is clear that waste management is more than just a business to the three brothers, with the business an employer of Aboriginal people and playing a part in reducing the impact of modern society on the land.

“Waste mostly goes to landfill, diverting that is something we are pretty proud of,” Gerard said.

“Our goal is getting Aboriginal participation in our business … not because we have to but because we want to make a difference.”

Gerard said word spread quickly when work was available for Aboriginal people, including among at-risk youth often lacking the confidence or the skills to seek work from non-indigenous employers, who may be less understanding of their circumstances or cultural values.

Peter admits he often ends up helping out staff, including regularly giving them lifts home, because they can share their problems with him and the other directors.

“They can come to us and be more open about things,” Peter said.

“They are great workers,” he added.

Peter said he had spent a great deal of time working with indigenous communities, particularly younger people, to encourage them to develop their careers.

Even his success after football provides lessons for many Aboriginal kids who are inspired by sport.

“It is helping them understand that education and employment is important, especially for their community.

If that kind of example works for young indigenous people transitioning to adulthood, then it is quite likely that more Aboriginals with entrepreneurial ideas will look up to the example set by the Materas.

Peter and Gerard acknowledge they have put a lot of work and sacrificed much to get their business to the position it is today.

“No-one thinks of us as a backyard business,” Peter said.

“A lot of people say that,” Peter said. “They say ’don’t go too quick because you can come down just as quick’.

“We look for innovative ways to move forward without risking too much.”