Gloves come off for state poll

Colin Barnett certainly does not want blame for the Commonwealth’s share (of energy price rises) lumped on to him as well in a pre-election year. 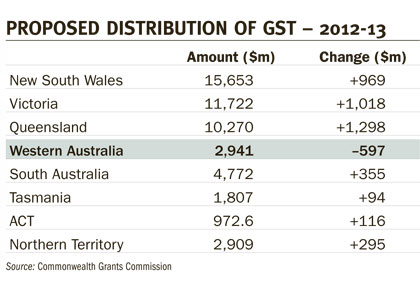 Colin Barnett certainly does not want blame for the Commonwealth’s share (of energy price rises) lumped on to him as well in a pre-election year.

It might still be almost a year away but make no mistake the gloves are off in the lead-up to the next state election. Labor’s wipeout in the Queensland poll has seen to that.

Two factors have surfaced to help explain the huge majority for the Liberal National Party that not only ended Anna Bligh’s premiership but also prompted her sudden resignation from the political scene altogether.

The first was Ms Bligh’s credibility. She had done an about turn on privatisation early in her term and then launched a strong attack on LNP leader Campbell Newman’s business links during the campaign. When these charges were found to be groundless, she declined to apologise.

The goodwill from her leadership in last year’s disastrous floods dissipated.

The second, and the more relevant to Western Australia, was cost of living pressure and concern for the future. This point has not escaped the attention of the WA Liberal and Labor strategists and it was Premier Colin Barnett – clearly seeing the dangers for his government – who was first to react.

As WA Labor has been hammering for some time, power prices have jumped 57 per cent since the change of government in 2008 and water charges have risen by almost as much.

So he let fly on ABC 720 last week, saying his government was being forced to cut back on health and education programs in the May budget because the Commonwealth Grants Commission was recommending the state get $597 million less than last year in goods and services tax reimbursements.

In fact, WA is the only state to suffer a recommended decline. Queensland does best with a jump of almost $1.3 billion in its GST refund next year followed by Victoria, up just over $1 billion, and NSW, $969m more (see table).

The reason? According to the grants commission: “Western Australia has the highest assessed fiscal capacity due to its very high revenue-raising capacity.

“The high capacity is due to above average mining production, property transfers, payrolls, motor vehicle registrations and land values.”

Mr Barnett emphasised the unfairness of this decision at a time of growing pressure for new and refurbished infrastructure throughout the state. It is needed to service not only new projects but also the rapidly expanding population as workers – many with young families – move to WA.

He also warned that his government could hold back on approving new resources projects – due to start in five to eight years, for example – if the provision of essential infrastructure, plus services for the workforce and associated families, could not be guaranteed because of the Commonwealth’s tight-fisted approach.

And, to show that he was very focused, he also singled out the federal government’s new carbon tax, due to apply from July 1.

The premier acknowledged the steep jump in electricity prices since 2008, but was quick to note that last year’s increase was a more modest 5 per cent and a similar rise was being planned this year.

Then came the punch line. Mr Barnett said there would be an additional cost slug on householders, and small business, because of the carbon tax – the Gillard government’s carbon tax.

He declined to assess the actual impact but it has been independently predicted it could add up to an extra 10 per cent to household electricity bills.

Mr Barnett’s motive was obvious: he will wear the odium for the 5 per cent rise, which is still above the inflation rate for Perth. And he will attempt to make it sound modest as part of his government’s strategy to achieve full cost recovery in the provision of services.

But he certainly does not want blame for the Commonwealth’s share lumped on to him as well in a pre-election year.

It might be a challenge to get that message over, but what he wants voters to absorb is that most of the increase in electricity charges is likely to come courtesy of Canberra.

Mr Barnett was also keen to emphasise that proposed increases in health and education spending planned for WA’s May budget will have to be scaled back because of the grants commission and Julia Gillard’s “failure” to intervene.

And he threw in that other states did very well from gambling taxes, with all the attached social problems, but there was no offset for WA, with its more modest gambling sector.

The counter argument is that WA has done very well out of the grants commission over the years, especially when it was a claimant state. It should not start whingeing now when the boot is on the other foot.

The premier says that’s OK to a point. But he wants an agreed minimum rate of reimbursement, rather than the continued blunt application of a formula which “penalises the state for its success”, when compared with the rest of the country.

But, with WA being recommended to get a GST payment of only $1,219 a head next year, compared with $2,177 for Queensland and $12,223 for the Northern Territory, that’s too much for him to stomach.

Not surprisingly, the Opposition is not impressed by the premier’s argument.

Treasury spokesman Ben Wyatt has accused the government of wasteful spending. He has singled out the $400 million-plus earmarked for the Perth waterfront project and the almost $30 million for the premier’s new, refurbished office opposite Parliament House, as projects diverting money from more deserving areas.

Despite this, all the signs indicate WA will end this financial year with probably the biggest budget surplus in the nation.

Whether this is enough to offset the GST cut remains to be seen.

But the GST payout prospects for subsequent years do not seem likely to get any better and, with the election due on March 9, Mr Barnett is keen for voters to focus on Canberra.

Mr Wyatt, and Labor, want the focus of voters to be closer to home.