Retail supply is at a premium in the CBD, and several overseas names are set to add to the space race this year. 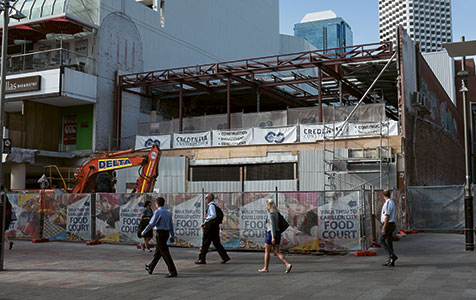 NEW SHAPE: The construction of Topshop's new Perth store will result in the transformation of Carillon Arcade. Photo: Attila Csaszar

Retail supply is at a premium in the CBD, and several overseas names are set to add to the space race this year.

Competition from international retailers in the CBD retail market is set to put the squeeze on rental supply in the city’s malls, with a host of high-profile international brands ready to make their debut in Perth in 2014.

“The normal rollout of any international brand has historically been Sydney and Melbourne first, quickly followed by Brisbane,” Mr Tsagalis told Business News.

“On of a lot of occasions now, we’re sitting in that top three.

“That’s a pretty significant jump, because geographically it is easier to manage a business in Brisbane out of Sydney or Melbourne.

“Perth becomes almost another country by way of distance, but what we’re finding is because the economy is so strong, relatively speaking, Perth is being pushed up the list, with retailers expecting they can do well here.”

Mr Tsagalis said the push from international retailers would tighten supply of retail tenancies in the CBD’s highest traffic locations.

Analysts at CBRE put Perth CBD retail rents at $3,005 per square metre in the last quarter of 2013, the third highest in Australia behind Brisbane and Melbourne.

“We believe we’ll go into a shortage of opportunity very quickly, even though Perth is growing,” Mr Tsagalis said.

“The nodes of the city, some are very defined, like King Street, but the reality is, the brands that are high turnover … will want to be on the malls, it is as simple as that.”

The call comes ahead of internationally renowned youth fashion brands Topshop and Zara opening later this year in reconstructed premises in the Murray Street Mall.

Luxury handbags, shoes and accessories brand Miu Miu is also set to open shop in King Street in June, having resolved issues with the City of Perth surrounding a heritage-listed staircase.

Meanwhile, high-end menswear retailer Herringbone has moved to new digs, vacating its long-term London Court home in favour of enex100, alongside a stable of top brands such as Calvin Klein, Guess, Mimco and Witchery.

Mr Tsagalis said Zara and Topshop had identified the ideal location for youth fashion in the Perth CBD, but were forced to undergo significant refurbishment projects due to the limited availability of large retail premises in the city’s pedestrian malls.

In all, 35 tenancies are being renovated to create an $8 million, 2,200sqm Topshop Topman store at the Carillon Arcade, while Zara will spend $5 million constructing its Perth shop on the adjacent vacant lot.

Both stores are aiming to open in October this year.

International brands H&M, Hollister, Forever 21 and Uniqlo are all understood to be keen on entering the Australian market in 2014, but it is unclear at this stage which of these has their eye on Perth.

At the newly repositioned 140, CBus Property announced earlier this month that German restaurant and beerhouse Brotzeit would take up one of the development’s flagship new tenancies in its first foray into the Australian market.

The Singaporean-owned Brotzeit chain has 14 outlets in locations across Asia including Singapore, Malaysia, Vietnam, Hong Kong, China, Philippines and Thailand.

Mr Tsagalis said there were a number of other high-profile global retailers interested in King Street and other CBD locations, but warned opportunities for international brands looking for large premises in high-traffic locations were rare.

“Topshop and Zara didn’t just come in and say they wanted to open here, and get 20 options given to them,” Mr Tsagalis told Business News.

“It’s never been easy to find that sort of space.

“Both are pretty much a reconstruct, and there are other deals that are set to be announced that will show that as well.

“There’s another big international name that I can’t reveal at the moment that’s going to take up a couple thousand square metres, where exactly that situation has occurred.”