In the age of social media, led by a generation of digital communicators, it may seem remarkable a tradition dating back millennia has not only survived, but is thriving. 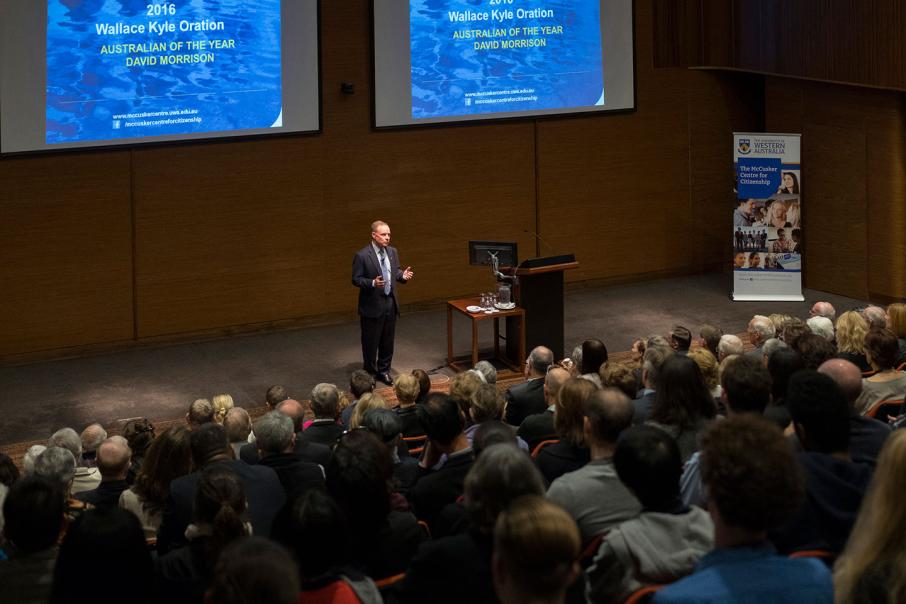 In the age of social media, led by a generation of digital communicators, it may seem remarkable a tradition dating back millennia has not only survived, but is thriving.

The McCusker Centre for Citizenship has been instrumental in helping restart a valuable community forum that had been largely left to wither on the vine in Western Australia – the Sir Wallace Kyle Oration.

While 21st century-style orations such as TED Talks from around the world can be consumed online, and TEDxPerth will be held next month, the opportunity to discuss issues in their local setting is one reason the Sir Wallace Kyle Oration has made a comeback after almost 10 years. 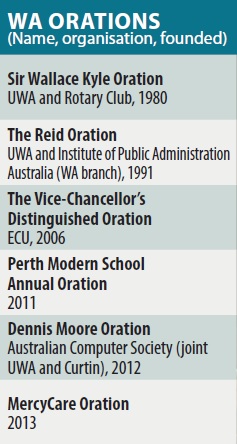 The McCusker Centre for Citizenship was established at the University of Western Australia late last year with a mission to promote active citizenship in the community.

Director Michelle Scott said the oration was a valuable tool that aligned with the centre’s aims, and so approached the Perth Rotary Club, which had previously sponsored the event.

“The Rotary Club had been sponsoring this particular oration for over 20 years and it just fitted the remit of the role of the centre – to generate and facilitate more public discussion (about community issues),” Ms Scott told Business News.

Attended by 300 people, this year’s oration was given by the 2016 Australian of the year David Morrison, who spoke on current social debates, in particular gender diversity.

“And by the number of people who attended the Wallace Kyle oration I think there’s a great appetite for people coming together to discuss contemporary social challenges in our community.”

Rotary Club member Richard Cook has been involved since its inception in 1980.

“When Sir Wallace Kyle died the club felt he had made a significant contribution to the state and the country,” Mr Cook said.

“He was a war hero before he was appointed governor of WA, and he was also involved as a chancellor at UWA.

“We contacted the university and said we wanted something to commemorate his life, and we felt the best way was an oration.

“We chose the theme ‘Service Above Self’, which is the motto of the Rotary Club, because it exemplified his life.”

The club initially raised funds for the oration, followed by investment from the university, and now the McCusker Centre has jumped on board as a sponsor.

The oration was this year held on the UWA campus, while past speakers have included Prince Philip and Australian of the Year Ian Frazer, who gave the previous oration in 2007.

“People had other things to do and I guess the oration just didn’t get the priority it should have had to continue running it,” Mr Cook said.

“I don’t think orations are an outdated trend, they probably appeal more to the senior group, although this year a lot of younger people attended.”

“If we want to attract a diverse range of people in our audiences it is important to offer alternative ways to participate … especially given our regional geography in WA,” she said.

“There is a lot of interest in these issues, whether you’re a student, a corporate, person or a member of the community.”

WA-based not for profit MercyCare adopted an oration in 2013 as its signature annual event, and last week welcomed former refugee turned pioneering orthopaedic surgeon and human rights activist Munjed Al Muderis, who delivered an oration to 600 people at the Hyatt Regency Perth.

MercyCare chief executive Chris Hall said the oration was designed to raise awareness, educate, inspire and change people’s perceptions of an issue through the telling of an individual’s story.

“And that it would promote a better understanding about why people seek asylum, the challenges they face when they arrive in Australia and the meaningful contribution they can make to the community.”

Corporate sponsors from the WA business community, including Datacom Systems, HWL Ebsworth lawyers and the Commonwealth Bank of Australia, have funded the MercyCare oration in recent years.

MercyCare has embraced the oration’s ability to bring people together as a platform to boost donations.

This year a ‘Keys to Life Fund’ was launched at the event, which will assist the 650 asylum seekers the organisation currently supports in WA by providing financial assistance to help bridge the gap to work, education and community connection.