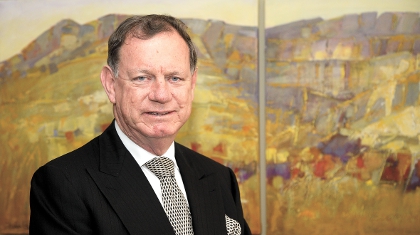 China-backed iron ore miners in the Mid West are preparing to join forces to develop a port and rail link to Oakajee if the current proposal by Oakajee Port and Rail fails to proceed.

Gindalbie Metals chairman George Jones has pitched September as the deadline for a final decision on the current OPR proposal; saying it will bring finality to the plan for a port and rail link from Oakajee to the Jack Hills, Karara and other mines.

If it doesn’t proceed, Gindalbie was preparing to work with other miners to the south of Geraldton, including Asia Iron, to get an Oakajee development underway.

“We will work together in putting a package together...if OPR gets up it won’t be needed, but if it doesn’t get up then we’ll get serious about it,” he said.

Making an Oakajee development viable depended on minimum tonnage through the port of about 35mtpa.

Gindalbie’s Karara mine is aiming to reach 10mtpa production in its first stage, and 16mtpa once stage two is completed. It is ultimately tipped to produce 30mtpa.

Mr Jones said the ‘plan B’ option could include constructing a rail link from Karara to join Extension Hill and Weld Range; leaving the Japanese owners of Jack Hills mine, located further north, to develop their own rail link.

He stated there had already been interest in developing both the rail and port infrastructure needed.

“We already have an expression of interest in funding the rail component of it,” he said.

“I believe that there’s interest from China to participate in the port, and I’ve also had strong levels of support from major infrastructure funders to participate.”

“Parties continually float their so-called solutions, but are yet to provide details of design, cost, timeframe or funding. Once again, we have a thought bubble masquerading as a proposal,” he said.

“The fact is that the OPR model has been developed in the best interests of the entire region – not one specific project.”