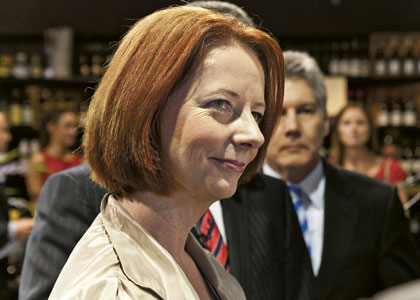 TALKING IT UP: Julia Gillard is focused and has next year’s federal election clearly in her sights. Photo: Grant Currall

Make no mistake. Prime Minister Julia Gillard and her cabinet ministers are in election mode. Their visit to Western Australia last week was clear evidence of that.

The nation is not due to go to the polls again until the second half of next year – “in 48 weeks”  one Labor insider told me, plucking a seemingly notional figure out of the air.

But Ms Gillard is on the move. And she requires her ministerial team to follow suit.

Not that everything always goes to plan. Her speech to open the Association of Mining and Exploration Companies’ convention, attended by hundreds of mining executives from across the country, was obviously poorly crafted.

Relations between the government and industry have not been good, thanks largely to the new resource and carbon taxes. Regardless of the impact on individual companies, the industry’s position is that the moves send the wrong message to investors, who after all provide the risk capital.

So it’s fair to say the prime minister was not among political friends when she spoke at the convention. That’s when it is time for a bit of stroking, ensuring that government across the board does its bit.

Infrastructure might have loomed large and the importance of a steady supply of skilled workers, with suitably qualified Australian workers getting first preference.  Not that hard.

Instead, she emphasised her new “education crusade”, which is aimed at primary and secondary students. Important? Yes. What hard-bitten mining executives expected to hear? No.

Emphasis on skilled workers – ‘tradies’ is the new popular term – would have sufficed, and how the government intended to assist in the training of Australian workers and manage the inflow of foreign workers to fill skilled jobs. But that did not happen, leaving many delegates shaking their heads.

It was a clear example of the divide between the prime minister’s office and what the miners and explorers expected to hear.

For an industry, which believes Canberra is out of touch, with the exception of resources minister Martin Ferguson and one or two others, it was confirmation of their worst fears.

And they have not been reassured by suggestions the slump in iron ore prices will be “corrected” within six months.

But it was a different story at the community cabinet meeting at Kwinana, where nearly 400 people braved the stormy night to meet Ms Gillard and 15 of her ministers.

I decided to sit incognito among the crowd and was told by the woman sitting next to me: “You are in Labor heartland here.”

The PM and her team received a standing ovation as they entered the gymnasium at the recently rebuilt Gilmore College, formerly Kwinana Senior High School.

Brand MP Gary Gray noted it was the prime minister’s second visit to Kwinana in the past year, and more than 4,000 people had attended a “jobs expo” earlier in the day, with about 770 being offered permanent or short-term jobs.

Ms Gillard then called on her ministers to explain what they had been doing during the day. They duly reported on visits to child-care and grain-handling facilities, Autumn Centres and a site at Point Peron earmarked for a controversial subdivision.

Education reforms had a high profile too, with a strong hint from minister Peter Garrett that Kwinana was well positioned to get a trade-training centre. That’s what the locals wanted to hear.

It was the 35th community cabinet since Kevin Rudd led Labor to power in 2007,and the sixth in WA.

Based on the reaction of people around me, Ms Gillard and her team would have been happy with the result. Much happier than with the AMEC meeting.

Such exercises have a dual purpose. They give voters the chance to meet ministers and present issues directly to the decision makers.

For example, the public forum was preceded by one-on-one meetings between constituents and ministers on issues relevant to their portfolios. School principals had a chance to discuss education issues with the prime minister.

The question and answer session also serves as a giant focus group. Ministers learn of the issues the community deem important.

For example, questions on the schools program, the possible Point Peron development, treatment of asylum seekers and indexing of pensions all attracted applause.

The government is also keen to get a bounce in support as well. Special minister of state Gary Gray holds the southern metropolitan seat of Brand by just 3.3 per cent. That’s not much of a buffer, especially when a swing is on.

But the prime minister is clearly focused and next year’s election is obviously in her sights.

As to the election date, August is the most likely month. Winter elections in Australia are relatively rare but September is out because of the football finals. And if she leaves it until October or later, the opposition will naturally be saying: “Bring it on, what are you scared of?”

Not that the date is set in stone. But it does provide a time line for all this political activity. And the MPs can see the finishing line getting closer.

Premier Colin Barnett’s admission that electricity price increases over the past four years may have been too steep is a major concession. It is also a clear attempt to defuse a potential vote loser ahead of the state election.

It was clear electricity prices would rise sharply, whichever party won the last poll in 2008. Labor had promised a “glide path” with annual rises of about 10 per cent. That looked hefty at the time. But it has been dwarfed by the massive increases under the Liberal-National alliance.

After charges had been held down for almost 10 years, first under Richard Court and then Geoff Gallop and Alan Carpenter, an enormous gap between cost and price had opened up.

Mr Barnett then pushed to close the gap with record increases over the first three years and a modest 3.5 per cent in the May budget.

The premier and his team have been hoping time will be the great healer - that voters will not mark the government down on election day. That is now 26 weeks away. But apparently voters have yet to forgive, or forget.

Hence, a little bit of the premier eating humble pie. And for a leader whose opponents claim he is arrogant, the exercise could kill two birds with one stone.