Julia Gillard jets in for an exclusive fund-raising dinner next week, which will be a test of her fence-mending skills. 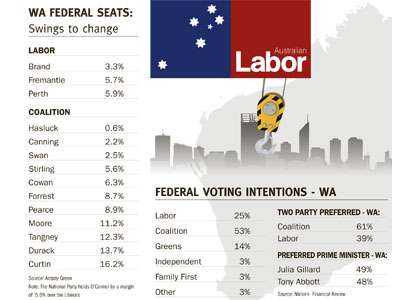 Julia Gillard jets in for an exclusive fund-raising dinner next week, which will be a test of her fence-mending skills.

Prime Minister Julia Gillard’s fence-mending skills will be put to the test when she visits Perth for an exclusive fund-raising dinner next week.

The Labor Party is still coming to terms with last month’s Queensland election debacle and assessing what impact federal issues might have played in the demise of premier Anna Bligh and her government.

Ms Gillard and her colleagues have been keen to seek to isolate the result to state-based issues. Her critics believe she is viewing the event through rose-coloured glasses.

And a look at a post-Queensland national opinion poll on voting intentions, which includes a state-by-state breakdown, suggests she has plenty to worry about.

Lest Liberal supporters be tempted to pop the champagne corks, the poll also provides a little sting in the tail for them, as well as a glimmer of hope for the prime minister.

The national Nielsen telephone poll was conducted over the last three days of March, just after the Queensland election. It found that the coalition led Labor by a massive 20 per cent on the primary vote and 14 per cent when the results were converted to a two-party preferred basis, after preferences.

That of course is wipeout material for Labor if repeated at the “one poll that counts”, due in the second half of next year.

But it is the Western Australian votes the prime minister will have on her mind next week. And although there is an element of “it couldn’t happen here” within WA Labor, the Nielsen poll suggests it just could.

While Queensland returned the lowest support for federal Labor in the poll of just 22 per cent, WA was not far behind.  Labor’s support in the west was put at 25 per cent, compared with a healthy 53 per cent for the coalition (see table).

Some observers say that even after the trauma of the Whitlam Labor government’s dismissal in 1975 when only Fremantle survived among the party’s WA seats, overall, the party’s support remained much higher, and believe the same is likely to happen again.

So let’s compare the polling figures with the actual margins the parties have in the state’s 15 federal House of Representatives seats.

In fact, the three most marginal seats are all held by the Liberal Party. They are Ken Wyatt’s eastern suburbs seat of Hasluck (margin 0.6 per cent), Don Randall’s Canning (2.2 per cent) and Steve Irons’ Swan (2.5 per cent).

In normal times, the margins in the state’s three Labor seats would be considered healthy. But these are not normal times.

Labor’s most marginal seat is Brand, in which special minister of state Gary Gray has a buffer of 3.3 per cent.

Then there is Labor’s traditional WA stronghold of Fremantle, held by Melissa Parke (5.7 per cent). The safest local seat is Perth, which defence minister Stephen Smith first won in 1993. He now has a margin of 5.9 per cent.

Local Labor realists know that unless things improve, the party will lose WA seats. They just don’t know how many, or where the axe will fall. It all depends on how alienated local voters are feeling.

That is, unless Ms Gillard can turn things around. Anything can happen in politics and it often does. And one party in dire straits should never underestimate the capacity of its opponents to help out with a spectacular blunder, when all appears lost.

She will be the guest of honour at a boardroom dinner hosted by Woodside at its Perth headquarters. Up to 20 paying guests are expected to shell out $5,500 each for a seat around the table. The proceeds will go to the Labor Party.

Incidentally, Woodside is taking an even-handed approach. The company says it supports the business networking groups of both major political parties and is prepared to provide a venue for a similar function for Opposition leader Tony Abbott.

All very civilised of course, but hardly in the same league as the lunches former Labor premier Brian Burke held with his ‘four on the floor’ coterie in the 1980s, in which the hat would be passed around  – with the coffee and port  – as cheques bearing six-figure sums were handed in.

But that won’t happen this time. Whereas it was the speculators and the fast-money men who signed the cheques back then – with one or two exceptions – this time it is the resources sector that is driving the economy.

And it is fair to say it is still coming to terms with two new taxes which some cabinet ministers refer to as “true Labor reforms”.

One is the minerals resource rent tax. The other is the carbon price mechanism. Both will apply from July 1.  The mining tax produced a bitter row between the government and especially some sectors of the iron ore industry, including the Andrew Forrest and Gina Rinehart interests.

Harsh words were exchanged. Even now they are far from happy with the deal essentially hammered out between the government and the three mining giants, Rio Tinto, BHP Billiton and Xstrata.

So the discussion around the table at Ms Gillard’s April 19 dinner promises to be interesting to say the least.

Not that state Labor MPs will be holding their breath. They are first in the voters’ firing line, with the WA poll fixed for March 9 next year.

Relations between the MPs and their party cousins in the east are frosty.  The locals believe members on the other side have little appreciation of sensitive issues in the west. And what’s more, they don’t care.

At one stage it was put to me that WA members had their heads in the sand by being parochial and failing to see the big picture.

The other side of the coin is that they have simply been representing the views of many WA supporters rather than just falling into line with federal Labor’s “group think”, dictated by the views of MPs representing inner-city seats in Sydney and Melbourne with no idea of how the resources sector works.

All they want is to get their hands on the money the new taxes will generate. In fact, when I asked one state Labor MP whether Ms Gillard was likely to see out the year as prime minister the response was: “I hope not.”

The view was that a new face, possibly that of assistant treasurer Bill Shorten, could help to placate the anti-Labor feeling and ease some of the pressure as WA Labor prepares for the state poll.

But that view does overlook the one positive for Labor in the Nielson survey. When it came to who WA voters preferred as the prime minister, Ms Gillard narrowly topped Liberal leader Tony Abbott 49 per cent to 48 per cent. That’s something for the Liberals to think about.

Ms Gillard is said to radiate a much more friendly persona “in the flesh” than in her stilted television appearances. That will need to be on hand, in spades, at next week’s dinner as Labor attempts to claw back support.