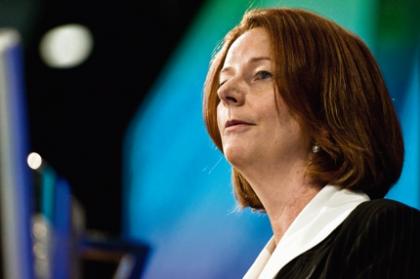 Prime minister Julia Gillard and her deputy Wayne Swan will continue in their jobs, after no competing candidates entered the leadership ballot called in Canberra today.

Former Prime Minister Kevin Rudd said immediately before the party-room meeting that he wouldn't contest the ballot, despite being backed by senior minister Simon Crean, who brought the issue to a head this morning by calling for a spill.

Mr Rudd said he was sticking by his word in not challenging Ms Gillard.

No other ministers were willing to challenge Ms Gillard.

"Both were duly elected unopposed and unanimously by the parliamentary caucus," caucus returning officer Chris Hayes told reporters in Canberra in Thursday.

He said Mr Crean was addressing caucus when Mr Hayes came out to address media.

Mr Crean walked in another direction.

"I think this puts aside all the instability that's been associated with peoples' actions around the leadership issue and allows us to focus on moving on and talk to the electorate," Mr Hayes said.

Ms Gillard called the spill after Mr Crean held a press conference to call for a leadership ballot shortly before question time.

Mr Hayes said the mood in the room after the meeting started at 4.30pm was sombre.

"These things are certainly difficult," he said, adding it was emotionally draining for members and senators.

"They are things you don't look forward to."

But Mr Hayes said most were happy the leadership issue had now been resolved.

"It puts beyond doubt the question of leadership of the Labor party."

Asked whether there was any discussion about whether or not Mr Crean was right to call for the leadership spill, Mr Hayes said: "There was no comment on that."

Asked if agitators against the prime minister should vacate their positions, Mr Hayes said everyone should respect the outcome of the caucus.

"We're a democratic party and as such we respect the majority rule," he said.

"I expect everybody to get behind that."

Chief whip Joel Fitzgibbon, a Rudd supporter, said he would consider his position in the next six weeks, although he still planned to stand in his seat at the federal election.

"It's well known amongst you that I've been very concerned about the directions of the government, and therefore the party," he told reporters.

"But the caucus has made its decision today."

Mr Fitzgibbon said he would consult with colleagues and possibly Ms Gillard about whether it was in the party's best interests for him to stay on as whip.

The chief whip is chosen by caucus so there is no provision to pick a new one before the budget parliamentary session in May.

Mr Fitzgibbon said he wasn't going to speak for any of his colleagues about what they should do.

"It gives us all a chance to cool down a bit and consider our positions," he said.

"I think it's a time for healing."

"I am not going to sugar coat any of that. That's why I took the decision that the party may have a better chance under a different leader. That is of course Kevin Rudd," he said.

"The caucus has come to a different conclusion. I now have to get behind that decision and do everything I can to ensure Labor wins the next election."

Mr Fitzgibbon pledged to Ms Gillard and to members of the government, "You'll be hearing very, very little from Joel Fitzgibbon between now and the federal election".

"I think it's time Fitzgibbon kept all his views to himself," he said.

Asked if Mr Rudd had blown his last chance to return to the prime ministership, Mr Fitzgibbon said, "Well, Kevin Rudd didn't do anything.

"He was urged by members of the caucus, including me, to have a crack."