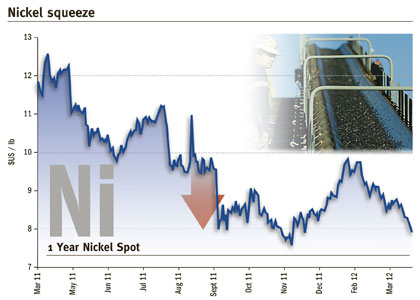 Rio Tinto’s planned exit from the diamond business will not be the only big change in the structure of mining in Western Australia in 2012, as higher costs and lower commodity prices start to bite, with nickel a perfect case study of squeezed profit margins.

Over the past 12 months, the nickel price has fallen more than 35 per cent thanks to a combination of falling demand for stainless steel, its major use, and rising production.

At the same time, nickel miners in WA have been forced to compete with iron ore and oil companies for labour and services, as well as copping a discount on the currency market as nickel is always sold in US dollars.

The metal, which started the modern WA mining boom in 1966 with the discovery of the Kambalda nickel mines south of Kalgoorlie, has become one of the sick men of today’s mining sector, triggering regular rumours that BHP Billiton is planning to sell its nickel business.

Combined with Rio Tinto’s diamond sale, which includes disposing of the Argyle mine, investors and workers are witnessing the start of a period of profound change in the state’s minerals industry.

One of those changes is that the two biggest miners, BHP Billiton and Rio Tinto, are shedding small and speciality business units to focus on bulk commodities such as iron ore and coal.

Another is that most value-adding mineral processing projects are struggling with costs, commodity prices and processing technologies.

In the bulks versus speciality metals arena, management studies have shown that the big miners are better suited to the bulks, such as iron ore, coal, manganese and phosphate. The bigger the project the better, because it facilitates the efficient use of capital.

Smaller business units, such as diamonds and nickel, require just as much management focus as the bulks for a fraction of the return and, more importantly, lack any form of producer control over pricing, such as that achieved in iron ore and coal.

Value adding, by converting ore into a higher-priced product, is another area that the major miners are avoiding for similar reasons. They face tighter profit margins in a high-cost location such as WA, with the added problems associated with using complex technologies in remote locations.

Three projects likely to be facing a tough time over the next 12 months are the Windimurra vanadium project, the Mt Weld rare earths mine and the Ravensthorpe nickel mine.

Investors have already woken to the problems at Windimurra by selling down their exposure to Atlantic, the company trying to revive a business which destroyed its previous owner, Precious Metals Australia.

Over the past 12 months, the share price of Atlantic has dived from a high of $2.45 to recent sales around 62c (down 74.5 per cent), with the latest price valuing Atlantic at a lowly $88 million.

Not helping work at Windimurra has been a weakening in the price of vanadium, which is used to make speciality steels. In that regard, vanadium is in the same boat as nickel, suffering from a decline as demand for steel production levels out (and possibly falls) in China.

Mt Weld, a mine designed to cash in on the booming rare earths market, is confronting two problems. The price of rare earths has fallen sharply since the middle of last year and Malaysian protestors have delayed completion of a plant, which will finish the processing of the speciality elements mined in WA.

The result is that over the past 12 months Lynas’ share price has fallen 59 per cent from $2.70 to recent sales at $1.11, a price which still values the business at a surprisingly high $1.9 billion.

The challenges facing Ravensthorpe are not as easy to track because it is part of a Canadian-listed company called First Quantum, which is better known for its copper mines in Africa.

However, the nickel price and technology challenges at Ravensthorpe, which defeated BHP Billiton three years ago, have not gone away.

Despite acquiring Ravensthorpe in a bargain basement sale, and then investing to revitalise the project, First Quantum is facing the challenge of a sharply lower nickel price since it took the plunge.

For close observers of the WA mining industry now is a time to buckle up as changes sweep across the entire sector, with the big miners adjusting their portfolios and small miners left to wonder what happened to the boom.

WA miners are not alone in confronting a challenging (and changing) market. In the US a truly amazing situation is emerging which could see the price of natural gas fall below zero – and that means gas producers might pay customers to take a surplus off their hands.

The problem, which does have an Australian link thanks to the emerging shale gas industry, is all about full pipelines.

What’s happening is that shale gas discovery and extraction technologies have been so successful that a vast glut of surplus production has developed, causing industrial users to switch to natural gas as fast as possible – though not fast enough to shrink the glut.

As the peak gas-use season of winter comes to an end, producers start to store gas in underground reservoirs and pipelines with the problem being that this year the storage locations are already close to full, which means current production has nowhere to go.

The first step in a situation like that is to shut in gas-producing wells, something that is already happening, though not fast enough it seems.

The next step is to heavily discount inventories, with speculation growing that some producers and pipeline operators will be forced to pay customers to take their gas surplus.

Coffee lovers might be in for a treat, with a bumper crop of beans in Brazil slashing the price of premium Arabica coffee by about 40 per cent.

Whether that flows through to a cuppa in a local coffee shop (or your Nespresso pods) will be interesting to see, with previous periods of low producer prices doing nothing for shop prices.

“If you want to get on in this world make many promises, but don’t keep them.” Napoleon Bonaparte.