Getting to work on abilities

With Australia’s rate of disability employment stagnating, Business News spoke to businesses and people with disabilities to find out how to improve participation and be more inclusive. 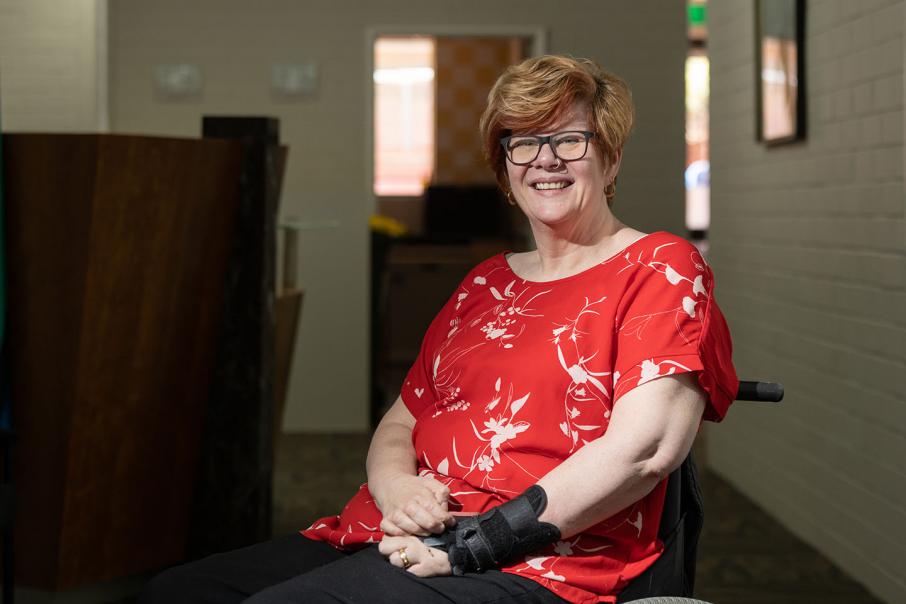 Samantha Jenkinson says part of the reason companies are not employing more people with disabilities is because of their understanding of disability. Photo: Gabriel Oliveira

With Australia’s rate of disability employment stagnating, Business News spoke to businesses and people with disabilities to find out how to improve participation and be more inclusive.

After spending months searching for work, lawyer Prue Hawkins took matters into her hands and started her own firm in 2015.

The now Empire Barristers and Solicitors director, who has osteogenesis imperfecta (brittle bone disease) and uses a wheelchair, said physical access and people’s preconceived ideas about what disability meant made job hunting challenging.

According to the Australian Bureau of Statistics, the participation rate of people with disabilities in the labour force has been stagnant since 2003.

The federal government has worked to improve the situation by announcing a Participant Employment Strategy in November aiming for 30 per cent of people who use the National Disability Insurance Scheme to be employed by 2023, up from 23 per cent in 2019.

People with Disabilities WA executive director Samantha Jenkinson said part of the reason participation had not shifted was because of people’s understanding of disability.

“There still seems to be this perception that having a disability means you’re not going to be as good a worker as other people,” Ms Jenkinson told Business News.

“All the data actually says the opposite.”

Research from Deakin University in 2002 found people with a disability took fewer sick days and were more likely to stay longer in a job.

“There’s that misconception that people think, ‘Oh yeah, having a disability you’re likely going to need to have time off’, but in fact if you can provide some of the flexibility people need, actually they are more likely to stay longer in a job and have less sick days,” Ms Jenkinson said.

Physical access, especially in smaller businesses, could also often be a barrier to employment, she said.

“A lot of small businesses might be in small buildings in suburbia and buildings that are over a certain age or under a certain size aren’t required to have lift access to any upstairs premises,” Ms Jenkinson said.

Ms Hawkins said she would often visit the office building before submitting a job application to see if she would be able to access the building in her wheelchair and whether it had an accessible toilet.

“A lot of the time I came across places that were not acceptable,” she said.

“Often when you actually go in and talk to people and you can do a bit of one-on-one with them about some simple things they could do to make their premises more accessible, sometimes they are quite easy fixes,” she said.

About 80 per cent of people with disabilities do not need any workplace modifications, but if they are necessary, Ms Jenkinson said companies and employees could access the Employment Assistance Fund to support them to make their places of work more accessible.

Ms Jenkinson said another barrier to employment was the reduction in entry level jobs.

Melanie Friedrich, who has a mild intellectual disability, works for Activ Foundation, the state’s biggest employer of people with disabilities, as a full-time administration assistant spreading her days across two different departments.

“I just do anything to assist with managers or staff members if they want anything done; scanning, emailing, putting details into one of our programs that we use,” Ms Friedrich told Business News.

Illuminance Solutions content researcher Kenneth Phua said the good thing about his job was the organisation did not presume what he needed to be able to do his job.

Mr Phua was diagnosed with retinitis pigmentosa in 2010 and gradually lost his vision before becoming legally blind in 2012.

“They are open to you coming and saying, ‘look, this is the task that I have been set, these are the supports I require to be able to demonstrate my ability to perform the task’ and the adaptive technology is then made available,” Mr Phua said.

“There is no perfect situation because technology is still a work in progress, in many cases, but the willingness and acceptance of a person with a disability to come forward is always a good thing to have.”

Mr Phua uses the accessibility features on his phone and computer to enable him to do his job.

“We also have adaptive technology in terms of screen reading so all of that does break down a lot of the barriers and removes the limits for a person with a disability, in my case, it’s blindness.”

Mr Phua said that despite the small adjustments needed, there was a debate about whether you should disclose if you have a disability when applying for jobs.

“Initially, I said I had a disability, but having spoken to a recruitment consultant, just like you wouldn’t put a photograph of yourself and prematurely put yourself out of the running, or give yourself an upper hand, why do you need to state the fact you have a disability?” he said.

“Isn’t your resume about your abilities and not the other way around?”

Cameron Smith, a recent electrical engineering and physics graduate, began a graduate role at BHP earlier this year and said he was not afraid of disclosing his disability.

“Everyone has been respectful, I can just happily say it to a random co-worker at BHP that I’m autistic,” Mr Smith said.

“I just feel safe there that there’s not going to be any backlash.

“Everybody has the right mindset there.”

He said the company was very accommodating to people’s needs.

“I know there was one time, [there was] one person with autism who couldn’t really focus during meetings,” Mr Smith said.

“To combat that they have this dough that they mould in their hands and by doing that it takes their brain off other things and helps them focus directly on the meeting.”

BHP is one of the companies working with Curtin University’s Autism Academy for Software Quality Assurance, which connects graduates to paid internships and provides the support needed to ensure a smooth transition into the workforce.

AASQA director Tele Tan said the program had placed 30 students and graduates at Bankwest, the Department of Transport, Deloitte, Hexagon Mining and Woodside.

After the success of the internship program in Perth, BHP is planning to extend it to its Melbourne and Houston offices.

“We know that our most inclusive and diverse teams perform better than average in areas such as safety, productivity, cost efficiency, employee engagement and mental health,” Mr Bourke said.

He offered advice to companies looking at hiring a more neurodiverse workforce.

“It is ok to start small, learn and grow your program incrementally, there are a lot of great organisations out there that are dedicated to supporting the increase of neurodiversity to the workforce,” Mr Bourke said.

People with Disabilities WA’s Ms Jenkinson said a lot of businesses were not aware of the support that was out there.

“If an organisation or a business took on or wanted to employ someone who has autism, the workplace modifications program and the job access support can actually come in and do some awareness and training sessions with all of the staff,” she said.

“(It’s) about what the organisation might need to do to make some reasonable adjustments for that person to have a good experience.”

With one in five people having a disability in Australia, Ms Jenkinson said businesses needed to reflect the diversity in society, particularly in customer-facing roles.

“We still have an issue with the business sector needing to get their head around who they employ actually needs to reflect the diversity of the community and they’ll be a better business for that,” she said.