New legislation aims to provide better protection for payments to subcontractors, but some say it misses the mark. 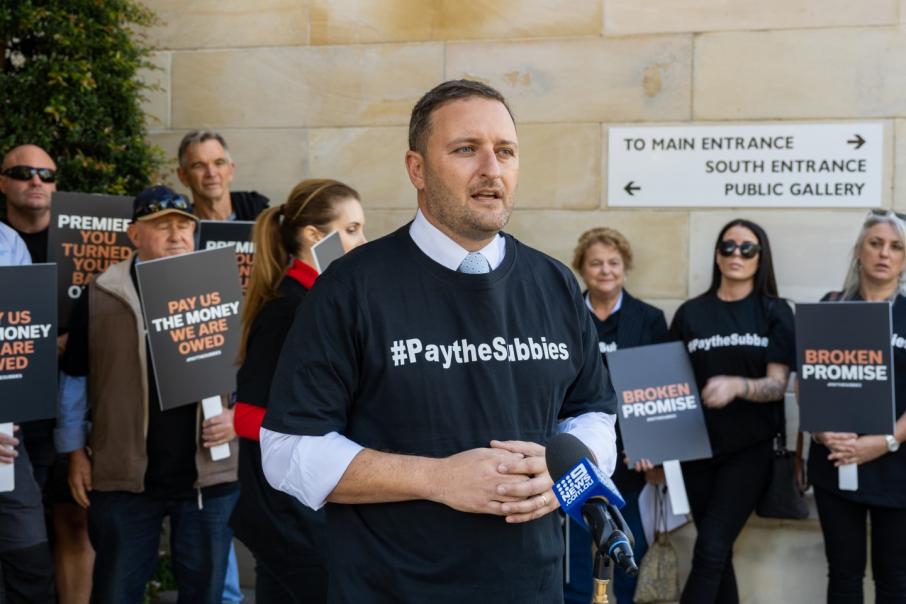 Even in the final moments before the legislation passed, the efficacy of the state’s Building and Construction Industry Bill (Security of Payment) 2021 and the degree to which it would serve its intended purpose was still being debated.

Much of the concern related to the Bill’s failure to include protection for cascading statutory trusts.

The reforms were touted as a means of delivering better protections for subcontractors in the event of an upstream insolvency, with mandatory retention schemes, provisions for monthly progress payments, and a rapid dispute resolution process.

The state government said the legislation would also equip the Building Services Board with extensive new powers to rid the industry of companies with a history of exploiting subcontractors.

Historical cases of builders going under, and leaving subcontractors millions of dollars in debt, prompted several industry-wide reviews across Australia in recent years.

The WA draft legislation was thrust back onto the agenda as a matter of urgency in May after construction works on projects across the state were brought to a standstill by the shock collapse of multi-disciplinary construction company Pindan.

In the weeks after the collapse, the CFMEU (Construction, Forestry, Maritime, Mining and Energy Union) and members of the state’s opposition took to the steps of Parliament House to voice their concerns about the Bill’s shortcomings, along with subcontractors affected by Pindan’s demise.

Finance Minister Tony Buti and Commerce Minister Amber-Jade Sanderson defended the decision not to include cascading trusts, which they argued could place a financial and administrative burden on all parties in the supply chain. This could risk pushing struggling businesses into financial difficulty.

Outside parliament, opposition commerce spokesperson Vince Catania criticised the state government’s justification and questioned its sudden change of position on the matter.

“Pindan is not the first building company to go under and it won’t be the last,” Mr Catania said.

“Now we need the government to act and do so by ensuring the legislation is adequate to protect subcontractors.

“The defence of not putting cascading statutory trusts into the Bill was that these companies need to have cash flow.

But the calls fell on deaf ears and the Bill was passed without the inclusion of cascading statutory trusts.

Ms Sanderson said the state government had consulted extensively with industry on the Bill and was confident the reforms struck the right balance but didn’t rule out considering other measures once industry had time to adapt to the new reforms.

Speculation grew about Pindan’s future amid reports subcontractors had walked off several construction sites after company directors told them they could not be paid.

Days later, it was announced that professional services firm EY had been appointed administrator of three Pindan entities and liquidator to a further nine.

The administration process is anticipated to be lengthy and painstaking for the subcontractors left out of pocket, as EY trawls through the company’s assets in the hope of securing capital for creditors.

Industry sources and the CFMEU rejected claims Pindan’s collapse had blindsided those working in the sector, instead citing rising project costs in the wake of COVID-19 and a culture of a race to the bottom respectively.

CFMEU WA state secretary Mick Buchan warned of a cascade of foreclosures and receiverships of subcontractors in the wake of the collapse.

He said the issues leading to insolvency and nonpayment of subcontractors were not exclusive to one business or its operations but were reflective of years of behavioural flaws embedded in the industry.

Mr Buchan said developers were having a field day, making margins in the 20 per cent range or more, while builders and some subcontractors were taking jobs at a loss.

“This is what we refer to the race to the bottom,” he said.

“It’s just not sustainable, and the whole industry has a responsibility to fix it. If we don’t, then it’s a matter of when, not if, the next major builder will go under.”

Mr Buchan said builders had reduced margins to remain competitive and win work in WA, operating at a level of risk beyond a point that made financial sense.

Companies were chronically undercapitalised, he said, and it was only a matter of time before more construction companies suffered Pindan’s fate.

A subdued market was one factor that had led to price wars.

“In the last two decades, the building and construction industry has undergone a major restructuring, with the role of construction companies in that market also changing,” Mr Buchan said.

“Some commentators have described this transformation as construction companies today being as much about investment banking and risk trading as putting up buildings.

“This has had significant implications for the contracting process, in particular in the reallocation of financial risk to smaller players within the industry.”

This behaviour had potentially further exposed subcontractors, increasing the likelihood of payments or leakages from the project payment cycle, according to a 2012 NSW independent inquiry.

While Mr Buchan said some of the new legislation measures were good pieces of the overall puzzle to solving payment problems, there were still inadequacies.

The system of retention money, he said, had been vulnerable to abuse, as builders were able to use that money to put into other projects, essentially risking money that wasn’t theirs.

As a result, if there were any issues with subsequent projects that had caused insolvency, that money owned to subcontractors was lost.

The current legislation had addressed problems of retention money being misspent, he said.

But those retention funds typically represented just 5 per cent of the total contract.

“They don’t actually provide proper security of payment,” he said.

“Only cascading trusts will do that; a proper system where money is put aside in trust accounts to make sure subcontractors are paid on time and in full in the case of insolvency up the contract chain.”

Mr Buchan said the union was committed to fighting for cascading trusts and would continue to work with and lobby government and industry.

Lavan partner, construction and infrastructure, Shane Pentony said while the 2004 Act had its own security of payment regime, the new provisions would more closely represent regimes in place in other states across Australia.

Mr Pentony said the new legislation would likely require higher cost of administration, which could work its way into contract tender prices.

Another significant change for industry practices includes the broadening of the definition of construction contracts under the new legislation, to include mining contracts.

“The SOP Bill does not exclude fabricating or assembling items of plant used for extracting or processing oil, natural gas, any derivative of natural gas or any mineral bearing or other substance,” Mr Pentony said.

“This means that many more oil and gas-mining contracts will be captured in the legislation, along with those owner operators responsible for them.”

Mr Pentony said the new legislation aimed to promote payment of genuine contractor claims by placing more of the burden on project owners and larger contractors, but did not prevent them from mounting ‘back charge’ claims (e.g. for defective work), which frequently allowed for cash retention monies to be used up.

“Whilst the retention trust scheme is obviously a valuable safeguard for subcontractors who enter into construction contracts with head contractors who fall into financial difficulty, it will usually represent at most five per cent of the contract sum value,” he said.

Mr Pentony said many contractors, as a result, could still find that the cash retention was taken away from them.

He said the retention trust scheme would not help subcontractors better secure progress payments – representing between 90 and 100 per cent of contract sum payments – which was the real crux of the issue for subcontractors.

“Other than protection for cash retention, the SOP Bill does not provide any assurances that in those circumstances a contractor will be paid what it is owed,” he said.

In 2016, the federal government announced a national review of security of payments to identify areas of best practice.

The final report was released in 2018 and outlined 86 recommendations, including the establishment of a system of statutory trusts for all building projects valued at $1 million or more with suggestions that those trusts would operate in a similar manner to project bank accounts, but with tighter oversight.

During that time, the state government undertook its own review, establishing an industry advisory group chaired by barrister John Fiocco, which subsequently recommended the implementation of cascading statutory trusts.

Project bank accounts have been common on government construction contracts.

Project bank accounts and cascading statutory trusts essentially integrate stricter regimes to ensure subcontractors are paid what is owed to them in real time (governing the entire project sum) directly from the payment to the head contractor.

Mr Pentony said the administrative costs associated with these measures was a likely reason as to why they weren’t mandated in the SOP Bill.

That exposure, along with witnessing individuals losing their homes due to non-payment, and previous experience in the technology sector, led Ms Stewart to establish ProjectPay in 2016.

“The platform enables project financiers to keep track of project capital provided and ensure all funds are being used appropriately,” Ms Stewart said.

“The level of data analytics and insight we provide into project cash flows provides project financiers with an additional layer of risk management and control.

“ProjectPay’s payment process ensures the security of payment for all project participants on a project.

“Unfortunately, the stats speak for themselves; it’s an industry with the highest rates of insolvency, with over $5 billion lost every year and terrible rates for delayed and non-payment.

“Any construction fund owner needs to take the risk of builder collapse and non-payment of subcontractors more seriously, alongside the terrible impact this has on everyone, including on investor returns.”

ProjectPay has since been tested by more than 100 subcontractors in WA, with the platform trialled on projects including construction at Curtin University and Hollywood Hospital.

However, it has found greater support abroad.

Last year, it received a £100,000 grant from the British government to trial its payment system on a £20 million project in London.

In addition, Ms Stewart said she had received an approach from UK-based Lloyds Bank, which had expressed interest in a joint venture.

She said some US states had already legislated cascading statutory trusts to protect payments.

“The business was always going to have a global focus and I think the barriers I faced in WA just accelerated our global expansion,” Ms Stewart told Business News.

“From an economic point of view, it’s common sense to make sure that the small businesses in the sector get paid so they can employ people, train apprentices, pay their taxes and continue to operate.

“It will go a long way to addressing the skills crisis in the sector as well.

“Ultimately the question is, who wants to work in this sector if you can’t get paid?”