Get ready for the real pain 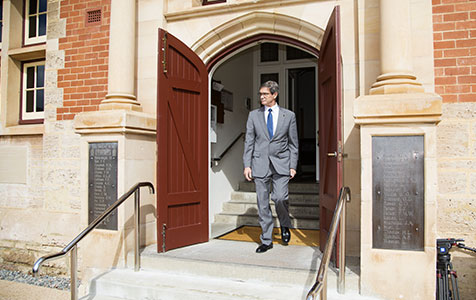 The slump in iron ore prices is more than bad news for the mining companies and Australia's export income. It is also sending the shivers through the offices of the Western Australian Treasury Department in William Street.

With the start of the new financial year only days away, the assumptions the projected revenue from royalties for 2014-15 are based on are starting to look very shaky indeed.

Premier Colin Barnett and Treasurer Mike Nahan must be cursing their luck – or rather lack of it. Their position contrasts sharply with that of long-term Labor treasurer Eric Ripper, who only 10 years ago was producing budget surpluses in excess of $1 billion in the "turbo-charged economy" of the time.

Mr Ripper was relying on revenue from a booming property market, a healthy refund of the state's goods and services tax receipts and growth in royalties thanks to expanding exports of iron ore combined with higher prices.

It was a great time to be treasurer.

But what was apparent even then, and glaringly obvious now, is that the premier and treasurer of the day, regardless of their political party, have little control over two key revenue sources – royalties and the GST refund.

The one exception is the rate applying to royalties, which could be increased to help fill the revenue gap. But the risk is this may kill the goose that lays the golden egg. Plus royalties have been pushed up over the past five years under Mr Barnett as it is.

According to the recent budget papers, total royalties income for the current financial year was expected to rise by a massive 33.6 per cent to $5.9 billion. It is tipped to grow by a more modest 4.5 per cent ($265 million) to $6.2 billion over the next 12 months.

That's where Treasury's assumptions come into play. It is reckoning on an average exchange rate of US90.6 cents for the coming year, with a headline iron ore price, including freight costs, of $US122.70 a tonne.

The fact that the actual price has been hovering around $US93/tonne, combined with an exchange rate of US93 cents, has the potential to blow a huge hole in the forecast budget surplus of $175 million if they are maintained.

And the shrinking proportion of GST revenue coming back to the state, thanks to the Commonwealth Grants Commission formula, only exacerbates the problem.

If voters thought last month's state budget was harsh, wait for the next episode if iron ore prices, and the exchange rate, get stuck at their present levels. There could be some real pain then.

Too often the huffing and puffing of the two media personalities, with one eye on their ratings and the other on their sense of self importance, has gone unchallenged because politicians have either lacked the courage or capacity to take them on, or are advised to say nothing and "deny them oxygen".

Mr Turnbull has never been accused of lacking either the courage or capacity to act when he considers it to be appropriate.

The other alternative, to say nothing when they have questioned his loyalty to Prime Minister Tony Abbott over what appears to be very dubious reasons, including having a "secret dinner" with Clive Palmer in a Canberra restaurant, would not have been entertained by Mr Turnbull.

Coincidentally, I met both Mr Turnbull and Mr Jones in 1978 when I was a member of Sydney's Parliament House Press Gallery.

Mr Turnbull was the state political reporter for Kerry Packer's Channel 9 and Mr Jones was an adviser to the Liberal Party leader, Peter Coleman. Mr Turnbull then won the NSW Rhodes scholarship, and Mr Jones made two unsuccessful attempts to enter the NSW Parliament.

Mr Turnbull has also fuelled speculation by not ruling out another leadership tilt, although he said the prospect of that happening was extremely slim. In revealing his ambition however, he was merely reflecting the view of his former business partner and former NSW Labor premier, Neville Wran.

Mr Wran always said that "any politician worth his salt has a field marshall's baton in the knapsack". In other words, if you are in politics and you don't harbour a leadership role, what are you doing there? How's that for honesty?

A bit more frankness from our political leaders, and standing up to hectoring from so-called media commentators simply out to attract attention, would be no bad thing.

Then observers, fellow journalists included, would not be surprised when politicians called humbug for what it is.

It didn't do Bob Hawke or Paul Keating any harm.