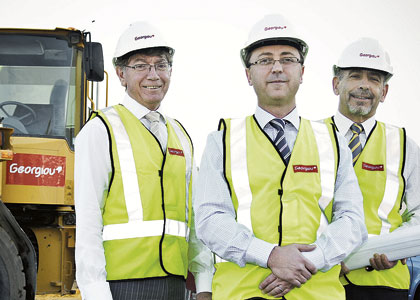 PERTH construction group Georgiou has won a $32 million contract from Lend Lease and LandCorp to carry out the earthworks for the first phase of the South Alkimos residential property development project.

The contract, expected to be carried out over two years, comprises earthworks and subdivision works for the Alkimos Beach coastal development, 40 kilometres north of Perth’s CBD.

It is the first major physical works since Lend Lease won the role to jointly develop the site with LandCorp in early 2010, launching the national listed company as a significant player in residential property in Western Australia. Lend Lease appointed experienced manager Martin Gaedke as project director for Alkimos in July 2011.

The earthworks also signals the project is back on track after being held up by the federal environmental approvals process. The joint venture partners expect the first residential land to be released for sale later this year, at least nine months later than anticipated when the joint venture was finalised in July 2010.

The presence of the graceful sun moth on the site is understood to have been one of the biggest issues the federal government took into consideration before approving the development on environmental grounds.

Alkimos is a major component of the remaining northern coastal corridor, which will be developed over the next 25 to 30 years. It will ultimately house a new community of about 15,000 people.

The first phase to be developed within Alkimos Beach covers an area of 224 hectares and will include approximately 2,200 lots. This part of the development will provide housing options for around 6,000 residents, as well as established areas for sport and recreation, business and retail, community education and employment.

Earthworks will begin in September 2012 and continue for five months, with lots due for completion early next year. The first residential land is expected to be released for sale later this year.

Alkimos is just one of a host of major developments taking place in the corridor. Last year, the state government chose Satterley Property Group as LandCorp’s development partner for the northern 3,000-lot parcel of Eglinton, just to the north of Alkimos.

All the major developers have projects in the region, including Stockland, Peet and Australand.