Georgiou kicks off construction at waterfront 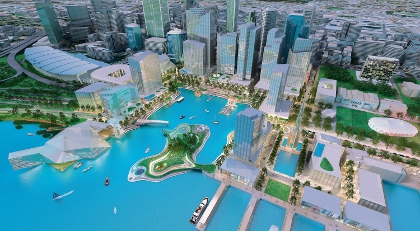 Construction has commenced on the $440 million redevelopment of Perth’s waterfront, with Georgiou Group picking up a $50 million contract for early works.

Premier Colin Barnett was on site today to officially mark the start of construction, which will see 10 hectares of riverfront land transformed to create a 2.7ha inlet connected by promenades and boardwalks.

“This is a very exciting time for Western Australia - a period of significant transformation, renewal and development that will change the face of Perth and ensure our city can accommodate a rapidly growing population,” Mr Barnett said.

“Perth Waterfront will deliver a new destination that continues the public’s use and enjoyment of this area of the city and address the critical need for more residential, commercial and hotel accommodation in the CBD.”

“Over the next 12-18 months the removal and relocation of trees, demolition and deconstruction of existing structures, road works and service infrastructure upgrades will be completed to prepare the site for construction of the inlet,” Mr Day said.

“While traffic along Riverside Drive will not be diverted until mid-2013, changes will be made to improve the connectivity of peripheral roads around Perth Waterfront and those works will start next month,” he said

Works to construct the inlet are scheduled to being later in the year, with public spaces and the inlet to be completed by mid-2015.

Mr Barnett said three major industry players had been shortlisted for the next stage of work, estimated at $200million, to construct the inlet, development sites and public realm.