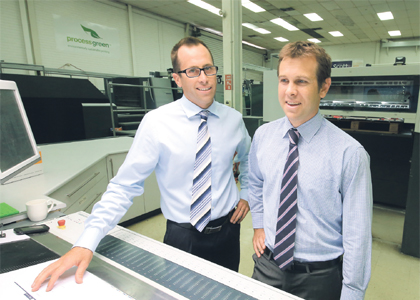 WHEN it comes to keeping a business in the family, most companies invest a great deal of time and effort in their transition strategies. Yet for Perth-based printing firm Scott Print, the change in leadership from one generation to the next can best be described as an ‘accidental succession’.

Mike and Dudley Scott founded Scott Print in 1979, following in the footsteps of their father who had also worked in the printing industry.

The family connection seemed likely to end there for Scott Print, with Mike’s son John, a corporate lawyer, and Dudley’s son Tim, an environmental scientist, having established careers in their chosen professions.

However with the Scott brothers taking a step back from the day-to-day activity in recent years to act as non-executive directors, it was a case of being in the right place at the right time for John and Tim, who have taken up co-general managerial roles.

“There was never any pressure from my dad for me to join the company,” Tim Scott said.

“He never, ever said ‘you should try it’ or anything, he just told me to do whatever I want to do, and I’m sure Mike thought the same for John, he would support whatever he did.”

John Scott had worked as a corporate lawyer in London and Sydney for a number of years before returning to Perth with his young family in search of a less hectic lifestyle. His homecoming, which coincided with a downturn in the print industry in the wake of the GFC, led him to consider the family business in a new light.

“I’d done 10 years working as a lawyer and really, those tough times during the GFC, that’s what sparked my interest,” John said.

“I started speaking to my old man about the print industry and what needed to be done and how it could grow in those tough times. That was where the seeds were planted.”

Tim became involved in the company while working on the Department of Environment’s green stamp program, an initiative aimed at reducing waste and pollution in the printing and cleaning industries. Visiting print companies as part of the certification process meant Tim “kind of got a taste for printing”, and he went on to join Scott Print’s sales team.

Tim’s background has inspired a renewed focus on working towards environmental best practice for the company; a move he said had enabled the company to further reduce costs in the production process and secure some big contracts.

For the new leadership team in place at Scott Print, the goal has been to cut operating costs while ensuring the company keeps up with changing customer demands amid advances in technology. This included moving away from offset printing to digital printing and from generic, high-volume printing to shorter-run, personalised printing.

Its renewed focus has been reflected in its recent rebranding to ‘Scott: prepare, print, deliver’.

“What you might find is that mums and dads might be able to upload a pdf but they can’t get past that point, whereas we make life easier for them,” Tim said.

While Scott Print’s leadership team is relatively new to the printing game, John and Tim are confident their energy and youth will ensure the company remains ahead of the pack.

“We’re in that building phase; whereas a lot of other companies in the print industry are in their twilight, we’re just in the first quarter of our game,” John said.