Perth's top 20 ASX companies hit a big milestone this month, albeit only for one day – for the first time ever, they all had at least one female director. Click through to read about some of the talented women who made this happen. 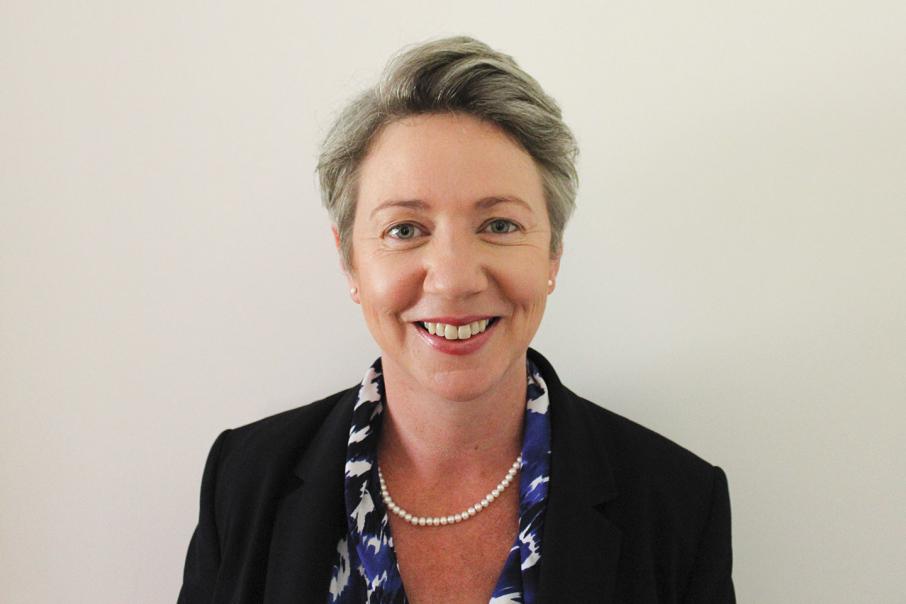 Perth's top 20 ASX companies hit a big milestone this month, albeit only for one day – for the first time ever, they all had at least one female director.

This milestone was reached after a stream of top 20 companies appointed female directors over the course of the year; in nearly all cases, their first female director.

The last to make this move was diversified mining and contracting group Mineral Resources, which appointed Chinese businesswoman Xi Xi to its board on September 11.

Five other top 20 companies – Independence Group, Resolute Mining, Western Areas, Galaxy Resources and Monadelphous Group – made the same move during the past year. 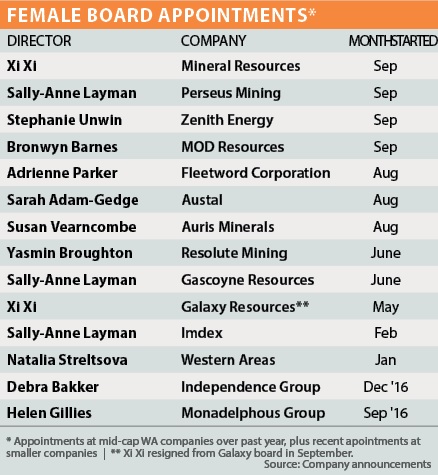 These appointments come after a concerted effort by groups such as the Australian Institute of Company Directors to lift female representation on ASX boards.

The AICD has a target for all ASX200 companies to have 30 per cent female directors by the end of 2018.

Only a handful of big Perth companies, led by Fortescue Metals Group, Navitas, Wesfarmers and Iluka Resources, have met this target.

The milestone achievement for Perth’s top 20 companies was short-lived, with Ms Xi resigning as a director of Galaxy Resources after she joined the Mineral Resources board.

Outside the top 20 there are many companies without female directors, including Ausdrill, Pilbara Minerals, Dacian Gold, MACA and NRW Holdings.

The recent appointments highlight the calibre of women taking board positions.

After 15 years with Macquarie Group, including as division director and joint head of the Perth office for the metals, mining and agriculture division, Ms Layman felt it was time for new challenges.

She has combined her three board roles with consulting work, and enjoys the variety that brings.

“It was just the natural next step,” Ms Layman said, adding that most of her current work drew on her Macquarie experience, but she had also sought out new opportunities.

“I actually wanted to extend my skill base,” Ms Layman told Business News.

“Imdex is a perfect example of that; it’s really a technology company and there’s a lot of potential in what they do to help miners become more efficient.”

Ms Layman said Macquarie provided her with a lot of governance training, and during her time there she was able to work with and talk to experienced board members.

To supplement that, she has completed the Chief Executive Women leadership program and, like every other person interviewed for this article, is doing the AICD directors course.

Ms Layman said her gender was not raised as a factor in her board appointments, but added: “I’m not naïve enough to say it wasn’t a factor”.

She emphasised diversity was about much more than gender, saying boards should seek out people with different education, experience and skills.

As a director, she plans to adopt the same approach that served her well during her executive career.

“I’ve never made an issue out of being female, and in return my clients never raised it as an issue,” Ms Layman said.

Another notable new appointee is Melbourne-based technology executive Sarah Adam-Gedge, who has joined Austal as a non-executive director.

She is the managing director of Avanade Australia, a business jointly owned by Microsoft and Accenture, and previously worked for IBM and PwC.

Austal chairman John Rothwell said the company had sought to appoint a director with strong enterprise technology experience, as it sought to become a ‘digital’ shipyard delivering ‘smart ships’.

“Sarah has outstanding credentials, with extensive business technology development and digital transformation experience which we feel will add great value to Austal,” he said.

“I strongly feel that many boards could benefit from having more directors with a technical background, and this is not well accepted across our industry, especially with majors,” Dr Streltsova said.

Dr Streltsova is a director of three listed companies in the minerals sector, including nickel producer Western Areas.

She looks for boards where she can utilise experiences from her executive career, which included stints at Vale, GRD Minproc and BHP.

“But mostly I look for a coherent and strong group of people that I can work with effectively,” Dr Streltsova said.

“Boards are, first of all, teams of people with complementing backgrounds and opinions, they need to function and work well together.”

Dr Streltsova said gender was a factor in her career but only in the early years.

“I learned to deal with some lack of acceptance, and I was fortunate to work with many male colleagues who were extremely supportive and encouraging,” she said.

Gender was discussed in some board interviews, but Dr Streltsova made clear she did not want to be appointed for that reason.

“Where I felt that gender was a deciding factor, I did not proceed beyond interviews,” Dr Streltsova said.

She believes there are many other experienced, highly qualified women who could be very successful and effective directors.

“Boards just need to look more broadly and be open to giving someone a go as long as the individuals have appropriate qualifications and complementing skills to other directors,” she said.

“I know this opinion is shared with several highly qualified female executives and directors.”

Debra Bakker has a résumé that is far more diverse and interesting than most, and this is reflected in her current roles.

She is a medical school dropout who worked in mining camps before completing a business degree at Edith Cowan University as a stepping stone to a corporate finance career in Sydney, London, Chicago and New York.

Upon returning to Perth in 2003, Ms Bakker established the Commonwealth Bank’s natural resources team, finishing up 10 years later as head of mining and metals origination. 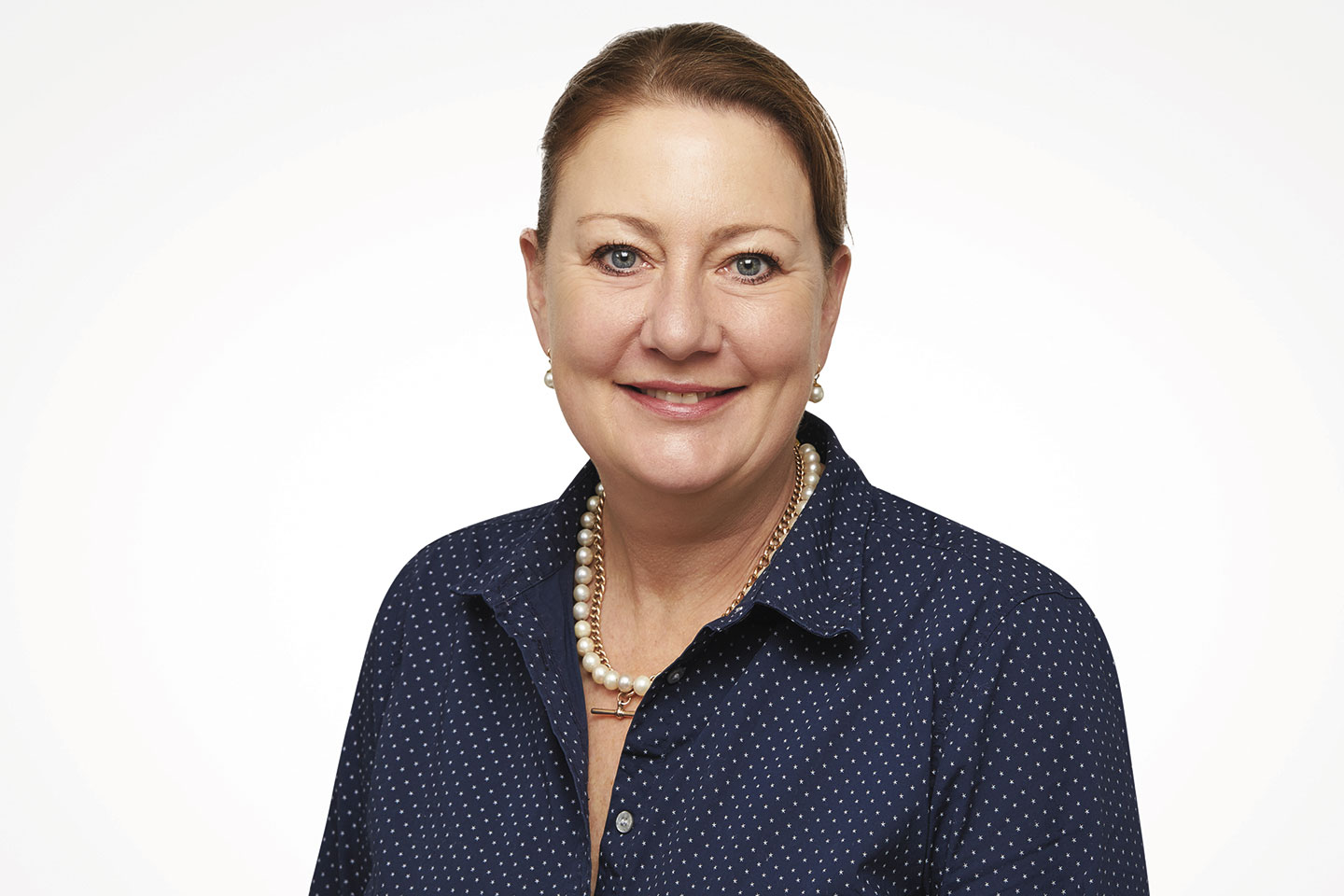 Her current day job is farming, and she is treasurer and a board member of the Margaret River Regional Producers Association, which runs the local farmers’ market.

Ms Bakker combines that with being the Western Australian representative of Auramet Trading, a New York-based metals trading and merchant banking firm.

She is also a non-executive director of not-for-profit group Access Housing and in December last year joined the board of gold and nickel producer Independence Group.

That marked the return of female representation on Independence Group’s board for the first time since 2014, something chairman Peter Bilbe described as a pleasing milestone.

Ms Bakker said gender had never been an issue during her career, either as an executive or a director.

“I never felt any adverse reaction to me being female,” she said.

Ms Bakker attributes that to her own character, saying she has a thick skin, and the way she conducts herself.

“Some women try to assert themselves too much,” she said.

“I don’t have to prove myself.”

Ms Bakker said Independence Group had completely revamped its corporate governance practices before she joined, and already had what she considered a good culture.

“They wanted someone who could help to maintain that, and keep it on that trajectory,” she said.