Western Australian textiles artist and design consultant Jennifer Gaye says she is excited about the direction her print works are taking her. 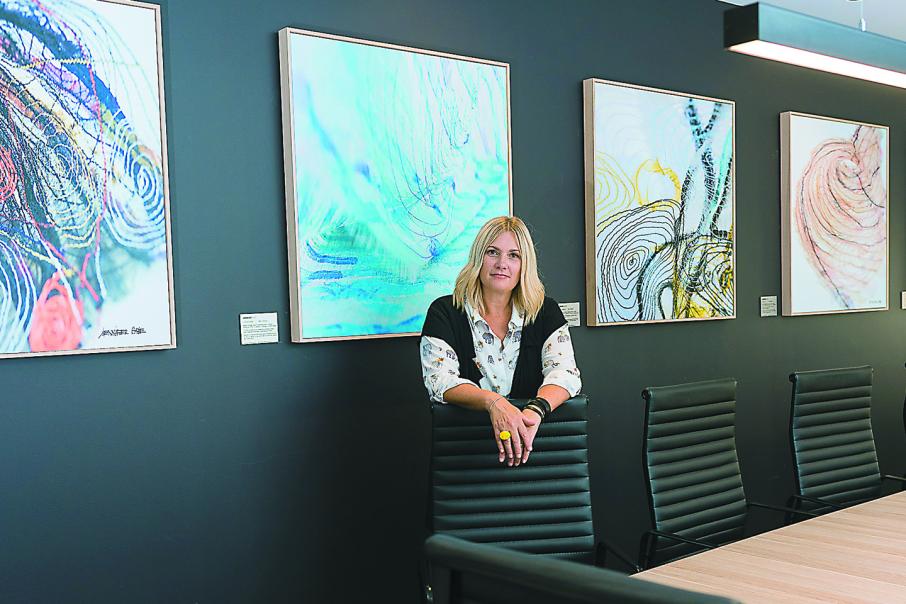 Western Australian textiles artist and design consultant Jennifer Gaye says she is excited about the direction her print works are taking her.

Prints by Ms Gaye are all about movement, with photographs capturing stitched or painted fabric collages in motion and applying them to canvas, glass or other surfaces. This method means the prints are well suited for interior design purposes.

In contrast, her textiles art is made by sandwiching those fabrics between clear perspex to allow for light to flow through.

“A lot of my focus is on nature and the cross between nature and urban environments,” Ms Gaye told Business News.

“I look at a lot of mapping of the oceans, so that’s why there’s a lot of circular movement in the pieces.”

Following its recent move to an office space in Burswood, WMP displays seven of Ms Gaye’s works in its boardroom with the remaining featured in meeting rooms and throughout the office.

“They were after something that told a story that was engaging for their clients,” Ms Gaye said.

“They also requested that I have plaques made up to tell a little story about each, so that when they’re with their client it gives them something to read about and creates conversation between the client and Wealth Management and Partners.”

Ms Gaye has worked in fashion and textiles for more than 25 years in roles that involved computer-aided designs, running her own small label, pattern making, and manufacturing.

To sustain a full-time artistic career requires more than one project or practice at a time, said Ms Gaye, who today operates a creative consultancy business and develops commissioned art under Jennifer Gaye Agencies.

She is currently working closely with a granola brand, guiding the branding and design work for its product range, while other clients include businesses within the fashion industry, the arts, or small local businesses.

The Banshu Fashion Textile Project, an ongoing collaborative initiative by the Department of State Development and Department of Culture and the Arts in 2010, was one of the most significant consultancy projects Ms Gaye oversaw.

The project involved international collaboration between Perth fashion and design schools in Perth and Japan, one of the world’s premium textile producers.

As an artist, Ms Gaye’s most prominent commission was by London-based art consultancy Peter Millard & Partners, which in 2016 purchased two large textiles artworks to hang in the foyer of a hotel in Scotland.