Gateway WA ahead of schedule

The $1 billion Gateway WA roads project is now 60 per cent finished, six months ahead of schedule, with final completion now projected by mid-2016. 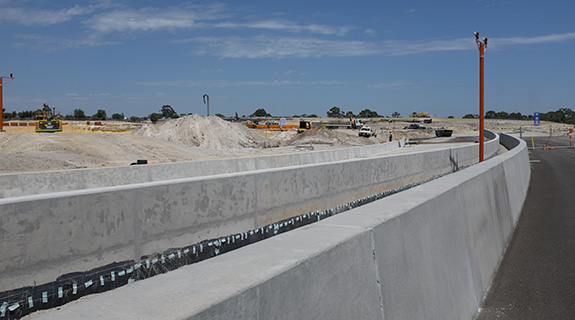 The Gateway WA project will now be finished by mid-2016. Photo: Attila Csaszar

The $1 billion Gateway WA roads project is now 60 per cent finished, six months ahead of schedule, with final completion now projected by mid-2016.

Transport Minister Dean Nalder said reaching 60 per cent of the construction program marked a significant milestone for the project.

“As the second half of the project advances, positive effects will be felt across the city as major elements of the upgrade are progressively opened to traffic,” he said.

“The improvements within the Kewdale industrial precinct are almost finished, and four of the five new interchanges will come on stream before the end of the year.

“The completion of this central zone of the project will greatly improve the connectivity, reliability and safety of one of the state’s most important transport hubs.”

“This game-changing project, which is supporting 1,300 construction jobs, will significantly improve access around the airport and surrounding industrial areas, meaning businesses can get products to market more quickly and efficiently,” Mr Briggs said.

Work on the Gateway WA project began in the third quarter of 2013 and was originally branded with a 2017 completion date.

It’s now expected to be finished by mid-2016 with the achievement of construction milestones last year, including the first bridge beam installation for the Tonkin Highway-Leach Highway interchange.

More than 600 WA businesses have taken a bite out of the $400 million worth of contracts associated with the project.

The scope of work involved on the project includes the construction and upgrade of five main interchanges, widening Tonkin Highway to six lanes between Great Eastern Highway and Roe Highway, and upgrading Leach Highway between Tonkin Highway and Orrong Road to expressway standard.

It is being delivered by an alliance made up of Leighton Contractors, Georgiou, GHD, AECOM and BG&E, together with Main Roads WA.