WA has a $40 billion investment pipeline in oil and gas, while the Browse project may be gaining momentum. 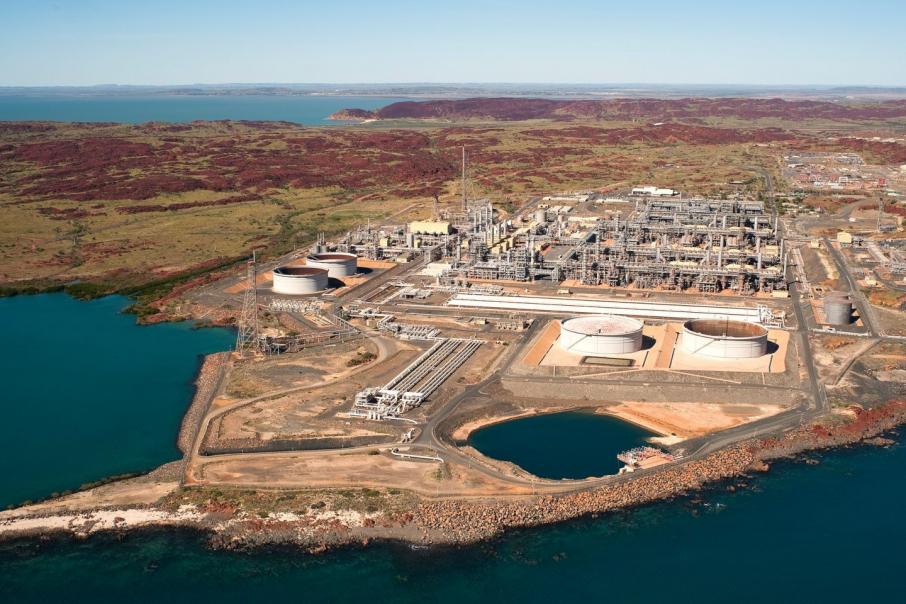 Reports of the death of oil and gas 18 months ago may have been greatly exaggerated, or at least premature.

While crude oil traded at negative prices for a period as the full effect of the COVID-19 pandemic became clear in April 2020, they have recently closed in on $US100 per barrel.

International news headlines have shifted from declaring the industry to be in deep crisis and potentially needing a bailout, to reflecting the big spike in petrol prices.

It seems replacing the world’s appetite for oil, at about 100 million barrels a day, is not as easy as flicking a switch.

Even plans by the International Energy Agency to cut oil and gas production on the path to net zero emissions by 2050 still include about a fifth of the world’s energy needs coming from fossil fuels.

Locally, a series of big projects have moved to a final investment decision in the past year, including Woodside’s Scarborough to Pluto Train 2 development.

Projects worth more than $40 billion are either under way or likely in Western Australia, according to Data & Insights (see table).

Business News understands one megaproject may also be back on the drawing board.

Browse gas could be piped back to Karratha to fill trains at the North West Shelf Venture, which already has excess capacity.

Browse has been through multiple iterations, including an onshore facility at James Price Point and a floating offshore project, with the pipeline option likely to cost about $30 billion.

Several factors suggest momentum could be rebuilding for Browse.

Aside from the high oil price, Woodside will soon control a third of the NWSV, through its merger with BHP’s oil and gas division.

Chevron had hoped to sell its 16.7 per cent stake in NWSV but reportedly withdrew it from the market earlier this year.

The US giant now has a stronger incentive for the Browse project to get across the line, because it would improve the price tag of its asset.

There are two plans well in train to reduce the ullage, or excess capacity, at the Karratha plant.

Gas from the existing Pluto project will soon be passed to the neighbouring Karratha plant through an interconnector, and gas from Mitsui’s Waitsia will also be processed in Karratha through a swap deal.

Moving through the 2020s, the ullage is projected to grow unless another source of gas is brought online, providing an incentive to develop a project such as Browse.

It was reported at the end of last year that Browse partners were also considering sending the gas through a pipeline to Inpex’s Ichthys plant in the Northern Territory.

That option would help the Browse partners create a level of competition in negotiating a gas tolling agreement.

But it would not solve the ullage at Karratha, which is relevant to four of the five Browse shareholders.

Finally, Woodside, BP and Mimi Co (Mitsubishi and Mitsui) announced in November they would scope the feasibility of carbon capture and sequestration as part of the NWSV project.

Carbon capture would help reduce emissions from gas projects already in the pipeline, although it would also support a future project such as Browse to pursue environmental approvals and sign new customer contracts.

Woodside’s 2021 annual report said the company was working towards front-end engineering and design entry for Browse and confirmed carbon capture was being assessed to manage Browse emissions.

Production licence applications were in the hands of regulators, Woodside said. Beyond Browse, which is considered ‘possible’ rather than ‘likely’, a series of projects remains in the ‘likely’ category.

Perdaman recently received ministerial approval for the urea plant and will have a gas source through the Scarborough project, where it has an offtake contract with Woodside.

The company had not confirmed a final investment decision at the time of writing, but it is understood the industry expects an announcement within months.

Further north, Inpex highlighted a goal in its 2022 outlook to raise capacity at its Ichthys plant in Darwin from 8.9 million tonnes annually to be 9.3mtpa by 2024. The company did not offer further detail.

It did, however, highlight a need for more gas by developing nearby exploration and discovered assets.

The company said it would consider expanding Ichthys, which has two LNG trains, in around 2030. Inpex did not respond to a request for comment. 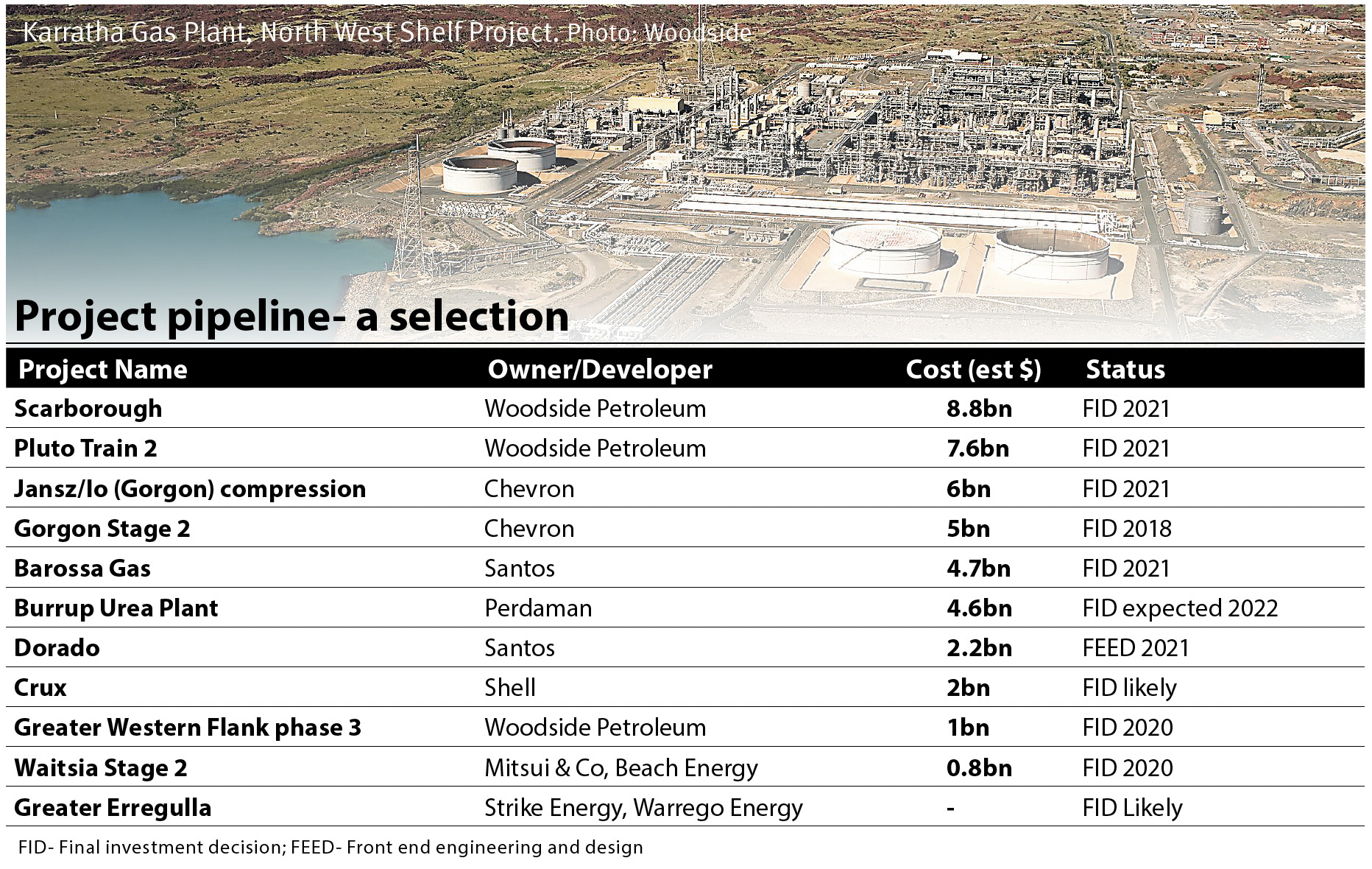 But it would remain at a level likely to encourage project development. “Prices have been on a continuous rise as the world continues to recover from the pandemic,” Dr Aguilera said.

“Meanwhile, there have been supply disruptions from important regions.

“The same is true for natural gas; prices are excessively high around the world.”

He said his view on prices ran counter to those of most analysts, who expected high prices to continue. Regardless of tensions between Ukraine and Russia, there was huge production to come onstream from projects under way around the world, and potential increased supply from US shale producing regions.

“All of this should result in an oversupplied market, which should put downward pressure on prices,” Dr Aguilera said.

The trend would be similar for LNG, as the Northern Nemisphere winter subsided, and new capacity came onstream.

“LNG producers are taking advantage of the major boom being experienced in the LNG market,” Dr Aguilera said.

Prices would probably normalise to around $US10 per million British thermal units, down from $US30 late last year.

For comparison, Woodside has reported a cost of supply for the Scarborough project of $US5.80/mmbtu.

There was also strong interest in onshore basins, Dr Aguilera said, including the Perth Basin and Canning Basin.

The Perth Basin could be undergoing its biggest investment boom in years, led by Mitsui & Co and Beach Energy developing Waitsia Stage 2.

Beach recently told markets site works were 42 per cent complete, with 3.75 million tonnes of gas annually to be swapped from the second half of 2023 in an agreement with BP.

Effectively, Waitsia will produce gas used by NWSV partners to sell into the domestic market, while Mitsui and Beach will receive a slice of Karratha gas to export themselves.

Beach also said a rig had been secured from Easternwell to drill five development wells in the basin.

Strike Energy is working on the West Erregulla development nearby, for which it lodged documents through the Special Development Approval Unit system in December.

First gas is expected in 2024. The company is also drilling at South Erregulla, and downstream seeking to build its Haber urea project.

Mineral Resources is hoping to production test the Lockyer Deep discovery from September within weeks.

The ASX-listed company will drill six wells in the basin in the next two years, it said, with two in the Carnarvon Basin this year.

Monadelphous’s recent half-year report shows oil and gas was the biggest sector by revenue for its maintenance and industrial services division, at 37 per cent.

By contrast, oil and gas represented only 2 per cent of its engineering and construction revenue.

However, projects such as Scarborough and Pluto Train 2 moving ahead will bring substantial opportunities for businesses.

Among them is helicopter transit operator PHI Australia, which will support Woodside’s Scarborough project.

PHI, which is part of a larger international group, will open a new base in Exmouth, in addition to facilities in Karratha, Port Hedland and Broome.

The number of positions will vary during the contract, with PHI Australia commercial manager Gordon Watt telling Business News it will create between 18 and 25 jobs, including for local Exmouth residents as support staff.

“It’s a fantastic [contract] award for us,” Mr Watt said. “Three aircraft for a contract in excess of two years is a great win.

“We’re seeing quite a sharp increase in activity now. “Lots of short-term drilling, indicative of a buoyant oil and gas market.”

Those are usually four-to-six-month contracts.

“To get something of this [timeframe] is great for us,” he said.

The rise in activity is a far cry from 2014 and 2015, when a prolonged low oil price put a big dent in the fortunes of contractors operating in Australia and elsewhere.

To put that in context, data in a recent presentation by Strike Energy shows the number of wells drilled annually in WA fell from a high of 194, mostly offshore, in 2008, to a low of nine in 2017.

“The oil and gas industry has suffered through a downturn … over the past 10 years,” Mr Watt said. “Helicopter contractors … have suffered.

“Most of the big players have had financial restructuring; it’s been a tough time.”

PHI would increase the size of its helicopter fleet in Australia to service the contract, he said, adding about six Sikorsky-92 choppers to take its total to 15.

“In Australia, fleet utilisation is almost 100 per cent,” Mr Watt said. “That’s not been the case for a while.

“If the [oil and gas] industry is going to continue to expand, [helicopter providers] will need to acquire more aviation support.

“There’s plenty of helicopters globally, we just have to get them.”

Despite the promise of a big boom in the next five to 10 years in WA, and the need for ongoing projects beyond that to keep LNG trains full, the industry has some major challenges to overcome.

The most substantial is growing pressure to reduce carbon emissions. Big exporters have started selling some cargoes with emissions fully abated to customers, and the work on carbon capture feasibility near Karratha shows producers are already thinking about tackling it.

Whatever path is taken, companies are facing increasingly tougher expectations and will need to meet a social licence to operate.

An example was the approvals process for Woodside’s Scarborough project, which was substantially delayed by appeals, and would be put at further risk by a court battle.