Growing demand for energy and LNG’s role in efforts to reduce CO2 emissions were among the positive takeaways from the LNG 18 conference in Perth. 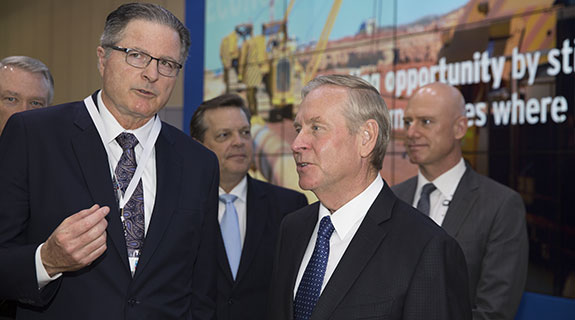 Growing demand for energy and LNG’s role in efforts to reduce CO2 emissions were among the positive takeaways from the LNG 18 conference in Perth.

DELEGATES emerged from this month’s LNG 18 conference in Perth with growing optimism for opportunities in the industry, despite the challenges posed by a supply glut that’s expected to continue for some years.

Many among the 5,000 who attended the triennial get-together were bullish about the long-term strength of demand for gas, with expectations energy use would continue to grow and a global push to reduce carbon emissions likely to lead to higher take-up of LNG.

Woodside Petroleum chief executive Peter Coleman identified one possible future trend when he said there could be opportunities for LNG producers to move further into downstream markets.

That would be particularly in developing countries, he said, where demand for gas existed but barriers to entry had slowed take-up.

Such a trajectory would follow the model of many oil companies, which are integrated from exploration and production through refining and retailing.

Regasification, the process by which liquefied natural gas is transferred back to the gas form found in domestic use, could provide a cheap entry point into new markets if the industry sought to venture beyond just selling at the border, Mr Coleman said.

That was aided by strong growth in the use of floating terminals during the past decade, with their capacity up from 0.5 per cent of total global regas capacity to nearly 9 per cent, according to the United States Energy Information Administration.

Despite strong demand in the developing world, Mr Coleman said the cost of land-based terminals, insufficient domestic distribution systems, and a lack of investment grade counterparties to contract the gas had blocked uptake.

Chevron chief executive John Watson issued an oft-repeated note of caution on the need to reduce costs to improve competitiveness.

“It’s no secret that Australia’s costs are high, 40 per cent higher than the Gulf Coast of the US,” Mr Watson said.

“It’s no secret that the productivity in building LNG projects isn’t what it will need to be going forward to attract additional capital.”

Resources Minister Josh Frydenberg said the government understood that, and was trying to drive costs down through trade agreements, workplace reforms in the construction sector, and tax changes.

Underpinning Australia’s strength as a foreign investment destination was the transparency and stability of the legal system, he said, which brought certainty for investors in large projects.

It wasn’t all gloom for the nation’s productivity, however.

Consultancy Risc said there were several special circumstances that had pushed up project costs at each of the recent LNG developments.

Chevron-led Wheatstone was located on a floodplain and the site had been rejected for earlier projects, while its Gorgon project was on Barrow Island, a Class-A nature reserve.

A further issue was that pipelines from the two projects and Woodside’s Pluto cross each other on the way to shore.

Further north at the Inpex-operated Ichthys development and Shell’s Prelude project, world-first technology options had contributed to cost escalation, with the Prelude project including gas to be liquefied on a floating platform.

Shell chief executive Ben van Beurden was among numerous industry leaders arguing that increased take-up of gas would be the best way to meet affordable energy needs while reducing emissions.

In the short term, however, a slump in the price of coal had encouraged an increased reliance on that fuel.

The need for emission reduction and growing energy demand meant LNG 18 delegates were bullish for the long-term future of the industry.

In the case of Total chief executive Patrick Pouyanne, that equation meant larger companies should be looking to invest counter-cyclically as it would keep costs low.

Many contractors took the view in 2015 that the oil price would come back and had been hoping for recovery, Mr Pouyanne said.

“The more we wait, the more the situation will be difficult,” he said.

With no new projects being sanctioned, contractors will face a difficult 2017, creating an opportunity to think about new projects.

Historically, Mr Pouyanne said, the industry had had five price collapses in the past 35 years.

When prices had taken off after the last collapse, companies had made windfall profits for the first few years as the market had adjusted, with costs then going up.

Another piece of good news for the industry’s future was Mr Frydenberg’s commitment that the federal government would be pushing states to remove moratoriums on unconventional gas extraction.

Pressure from environmental groups on farmers to stop access to their land would create long-term problems in terms of supply, price and attracting industry, Mr Frydenberg said.

Western Australia has large unconventional gas resources, particularly shale gas in the Canning Basin, but much of it has so far gone untapped.

Premier Colin Barnett warned that public support for projects was part dependent on tangible benefits to the local economy, with promised tax revenue not enough in itself. “Too easily a protest movement can gain a stature that was never anticipated by the companies,” Mr Barnett said.