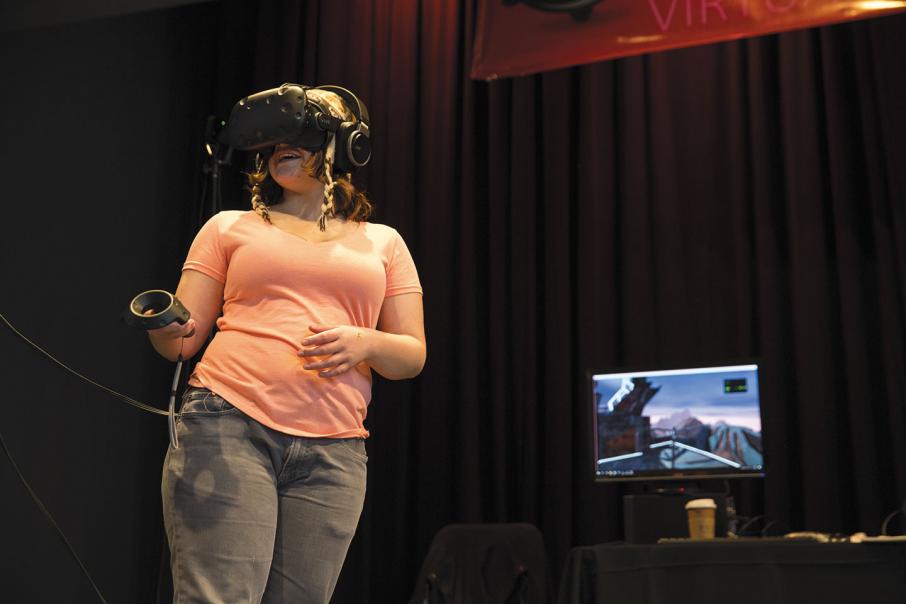 AHEAD OF THE CURVE: The games industry has always driven the adoption of new technology. Photo: Attila Csaszar

The worldwide games industry could be worth as much as $100 billion, according to PwC, making it bigger than Hollywood.

And while many may be surprised at that figure, its equally noteworthy that Perth is home to a vibrant and emerging games industry – creating cutting-edge virtual reality (VR) and augmented reality (AR) content not just for entertainment, but also training and simulation through serious games.

Western Australia’s games talent was showcased at this month’s Perth Games Festival, which I have been part of since Let’s Make Games launched it three years ago. The festival has grown each year, requiring expansion out from the Perth Town Hall to now include the new City of Perth Library and Cathedral Square.

Nearly 1,700 people turned out this year despite rain and the AFL.

Always well ahead of the curve, the Perth Games Festival has featured VR content since 2014, including Vocus Upstart winner Offpeak Games. (Offpeak’s VR jousting simulator reached the top 10 in its genre on Oculus share, the VR version of the App store.)

All of which makes sense, of course, given the games industry has always driven the adoption of new technology.

In his visit to Perth back in August, Apple co-founder Steve Wozniak remarked that what drove the adoption of the computer into homes was not spreadsheets or word processing, but video games.

The same thing is happening with games and the mass uptake of VR and AR, which TechCrunch is reporting will be worth $US150 billion in just four years.

Just look at Pokemon Go, which made AR games ‘a thing’, and the excitement around what’s being called mixed reality (MR) on devices like Microsoft’s yet-to-be-released HoloLens, which overlays holograms onto the real world with a pair of dorky-cool glasses.

I was lucky enough to take the HoloLens for a spin, trying out an interactive model of the ‘galaxy’ and a version of the standard alien shoot ’em up Microsoft used in the demo that got everyone excited about the device earlier this year.

The potential for new types of games using AR/MR is certainly compelling and will help to drive adoption of the device, leading to the normalisation of social uses, such as having a Skype overlay with your family overseas so you can ‘have dinner’ together.

Perhaps the best example of the games industry driving adoption is Sony’s PlayStation VR offering, which will make VR much more accessible. The PS VR plugs right into the popular PlayStation 4 game console, rather than requiring a complicated and expensive setup (as is the case with the Oculus Rift or HTC Vive). Launching on October 13, it’s expected the PlayStation VR will take VR to the masses.

Once again, the Perth Games Festival is ahead of the curve. Among the most popular displays was Stirfire Studio’s Symphony of the Machine, which is in development for Sony’s new VR offering, as well as the HTC Vive. At last year’s Perth Games Festival, Stirfire showed off a VR version of Dead End Alley, a zombie slaying simulator, featuring a 3D printed custom chainsaw controller.

The Perth Games Festival also showed off its more serious side, with Sentient Computing giving a demonstration of its ‘working at heights’ serious game, which is being used by the resources sector for staff training and induction.

According to market research firm Ambient Insight, the serious games industry is worth $A3.5 billion, which is in addition to the $100 billion I mentioned earlier for entertainment-based games.

Sentient managing director Douglas Bester said that, other than the fact that they were fun and engaging, serious games were becoming a key learning tool because most students had grown up playing games and now expected to be engaged in more active ways.

Games have certainly shed their reputation of just being for antisocial teenage boys.

Perth Games Festival coordinator Jess Watson attributes the festival’s success to the appeal of games to people from all ages and backgrounds.

“Families come to spend time together, students and aspiring game-makers join to make connections and get inspired, plus there are tech enthusiasts and local businesses,” Ms Watson said.

The research supports this too. Internet Advertising Bureau reported in 2014 that 52 per cent of gamers were women.

Now, everyone is a gamer.

• Kate Raynes-Goldie is the founder of Games We Play; the director of Games and Interactive at FTI and an adjunct research fellow at Curtin University.
She holds stock in Microsoft and Sony.