Game on in Melbourne 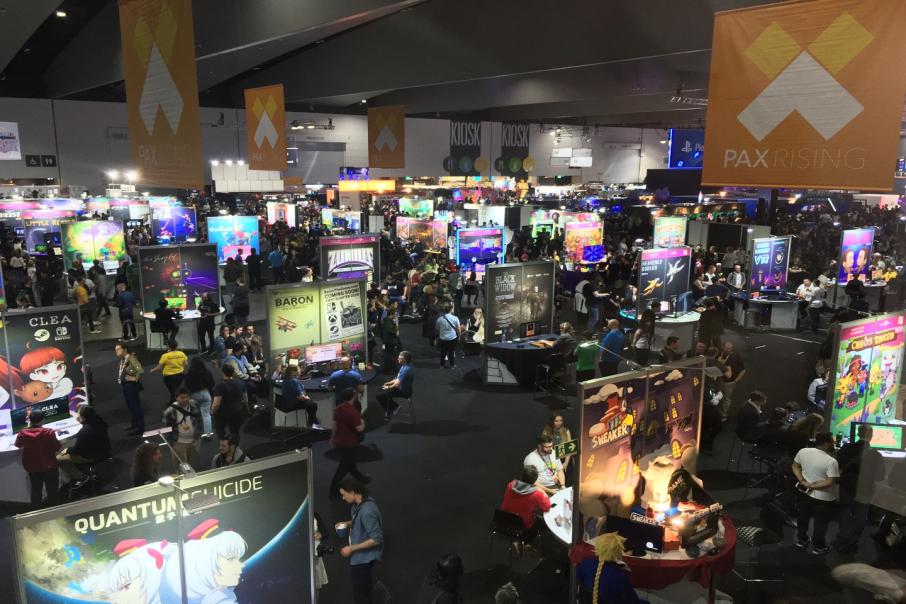 Some of the brightest minds and biggest companies in gaming were at Melbourne International Games Week.

Last week, Melbourne’s convention centre taken over by the games industry for the annual event. While MIGW organisers haven’t calculated official numbers for this year, they say it surpassed last year’s 76,000-plus attendees and was the biggest event since it launched in 2012.

The week included industry focused events such as Game Connect Asia Pacific, a developer day for the 3D modelling engine Unity, and the consumer-oriented PAX Australia, which is so massive it takes over the entire convention centre.

The games industry is expected to be valued at $US152 billion worldwide by the end of 2019, according to games and esports analytics and market research firm Newzoo. It’s an industry that includes some of the world’s biggest tech companies, such as: Sony (PlayStation and PS VR headset); HTC (Vive VR headset), Intel (which makes the chips used in many game devices); Microsoft (Xbox 360); and Nintendo, which makes nothing but video games and consoles.

PAX Australia also featured content made in Western Australia, including King Tut Studio’s ‘Little Bit Lost’, a game where you’ve been shrunk to the size of an insect and have to figure out how to survive, and Hungry Sky’s ‘Nekograms’, a puzzle game about sleeping cats.

WA-based podcasters Pixel Sift, who were recently awarded an Australian podcast award for games coverage, were there covering the event.

This year’s MIGW also featured a rare appearance by Apple, which hosted a lounge featuring its new Apple Arcade platform for Apple devices, including Apple TV. The service, which launched mid-September, uses a subscription model with exclusive, highly curated content. It’s being called Netflix for games.

One of the first games to be featured on the Apple Arcade is ‘Mini Motorways’, created by Wellington-based Dinosaur Polo Club. The game, an addictive road-building puzzle game, is also being featured at this year’s PAX Australia.

Dinosaur Polo Club studio director and co-founder Robert Curry said he was really happy so far with the new model for developing and distributing high-quality paid games in a really cluttered marketplace like the App Store.

“Paid games on the App Store are having less and less of an impact,” Mr Curry said. “Recent big releases haven’t done as well as people have hoped.”

Paid games sit in contrast to free to play games, which base their revenue on in-app purchases rather than charging up front.

A key theme raised during the week for smaller, independent developers was how the subscription model can resolve issues around long-term financial sustainability.

“We were getting a bit nervous about the game market anyway, because we’ve got a team of 10,” Mr Curry said.

The current model is one where studios are largely responsible for funding the development of their games upfront, which means they also take on a lot of risk. If a game fails or doesn’t sell as well as expected, it can mean the end of a smaller studio.

But models like the Apple Arcade can de-risk game development because it means studios get paid upfront for development costs while also sharing revenue after the game launches.

It’s also clearly lucrative for Apple, which is reportedly putting $US500 million into the development of new games exclusively for its platform. It’s again similar to the Netflix model, which funds the development of Netflix-only content to drive subscriptions.

So far the model seems to be working, according to Mr Curry.

“We have been looking at expanding anyway,” he said. “Just because of [Apple] Arcade we’ll be expanding a lot faster and a lot more.”

The continual growth of MIGW, especially PAX Australia, underscores the importance for business in understanding game culture and games as the media of our age.

For example, gamers want playfulness, humour, interactivity and experiences when they engage with brands – all things that are key parts of PAX Australia. Gamers and young people more generally are also moving away from mass social media platforms like Facebook and towards more closed, private spaces like Discord (which also started out as a niche service for gamers).

So if you’re curious about this massive cultural force, MIGW will run again in 2020 in Melbourne. You should come.