Game on for Barnett, McGowan

Next month’s state budget has taken on a fresh significance after a new poll reveals a resurgent Labor party. 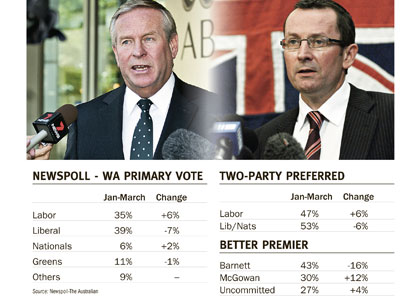 Next month’s state budget has taken on a fresh significance after a new poll reveals a resurgent Labor party.

Next month’s Western Australian budget will be the last before the state election early next year. But it will be no ordinary budget.

It has taken on fresh significance, with a new opinion poll indicating that after three years in the doldrums, Labor could be on the verge of a political comeback.

It would be a mistake to conclude that one poll will change the course of state politics. But the latest Newspoll on WA voting intentions has certainly given Labor a much-needed boost.

New political leaders generally enjoy a honeymoon period as voters react to a fresh face, new voice and usually a change of emphasis on policy issues. That’s what tyro Labor leader Mark McGowan got in the poll, and a bit more besides.

There was enough there for premier Colin Barnett and his strategists to ponder whether they just needed to get next month’s budget out of the way with a few sweeteners, including for small business, and then cruise to the poll. Or whether they now faced a real fight?

The premier’s public response was low key. He pointed out that Labor has 26 seats in the Legislative Assembly and the Liberals 24. The inference? Labor starts ahead and only has to pick up a few more seats –  four in fact – to be able to again form government.

The reality of course has been something different. Support for WA Labor had been adrift since the 2008 election defeat and nothing the party tried under then leader Eric Ripper was able to arrest the slide to historically low levels. Until now.

The Newspoll showed Labor’s primary vote was up to 35 per cent,  a six-point rise since late December,  compared with 39 per cent for the Liberals (down seven points) and 6 per cent (up two points) for the Nationals.

The Liberal-National alliance still enjoyed a healthy six-point buffer on the two-party preferred basis, but it was a sharp drop from the 18-point margin a few months ago. (See table.)

Mr Barnett was still well ahead in the ‘better premier’ category but again his margin has been slashed –  from 41 points compared with Mr Ripper late last year, to 13 up against Mr McGowan. Significantly, 27 per cent of those polled in this category were undecided.

So what has happened? Putting the honeymoon factor to one side, Mr McGowan has been able to wrong foot the government on a number of issues. This suggests that after four years in power – normally there would have been an election by now –  some complacency might have crept into the Liberal-National ranks.

One of Mr McGowan’s first moves was to throw his support behind Sunday shopping. This was a clear message to voters that he was not going to be held back by the conservative Shop, Distributive and Allied Employees Association’s secretary, Joe Bullock, who had influenced Mr Ripper’s resistance to the change.

The premier reacted quickly and said he would now legislate for Sunday shopping. Up until then, the Liberals had been hamstrung because the Nationals were opposed too.

But, rightly or wrongly, Labor’s new leader was seen to be the facilitator.

His reversal of Labor’s long-term tolerance of the Potato Marketing Board also surprised the Liberals. The board has been the baby of the Nationals for years, under the guise of “orderly marketing”. Labor had gone along with it too. Until now.

The question is:  can Labor maintain the momentum? And can the Liberals and Nationals regroup to head off a resurgent opponent?

The government’s next big chance to show its credentials will be in the state budget on May 17. The premier has already flagged problems, with a reduction in WA’s GST reimbursement of $600 million. That is a very real issue, courtesy of the Commonwealth Grants Commission.

But small business is crying out for tax cuts and treasurer Christian Porter will be duty bound to deliver to his party’s traditional support base.

Householders have been assured that increases in electricity and water charges will be far more modest than for the previous three years. The message will be that ordinary voters have endured enough pain and that the screws can be eased.

Labor will continue to press home its message: enough is enough. Game on.

The surprise resignation of the Greens leader Bob Brown has added a new dynamic to national politics.

Will his departure herald a policy change and will the party continue to chip away at the support bases of the major parties, especially Labor?

Senator Brown had been the Greens’ only leader. And the party’s remarkable success at both the federal and state levels is testament to his effectiveness.

He has been widely compared with the former Liberal minister, Don Chipp, founder of the Australian Democrats, whose famous slogan was to keep the bastards honest. Mr Brown says he wants the Greens to go one better and “beat the bastards”.

The big question now is: where will the Greens go from here?

There has been speculation that under the new leader, fellow Tasmanian senator, Christine Milne, the party will move even more to the left with a more radical approach.

That would certainly test the electorate. It would also put Senator Milne’s powers of persuasion to the test.

It’s reasonable to assume that Green voters to the left of Labor will stick with the party. Whether moderates who support its environmental policies will stay on board will be the real test.

Former prime minister John Howard seemed surprised in Perth late last year at the suggestion the Liberals had lost votes to the Greens.

That was a reference to what has loosely been called the “doctors’ wives” syndrome. And, certainly, the Greens polled well in the blue-ribbon federal seat of Curtin.

Labor in particular will be hoping support for the Greens has peaked so that it can win back a big chunk of its lost primary vote.

Greens WA senators Scott Ludlam and Rachel Siewert will be hoping the opposite.