Pressure is mounting for WA Liberals to lead the way on GST reform. 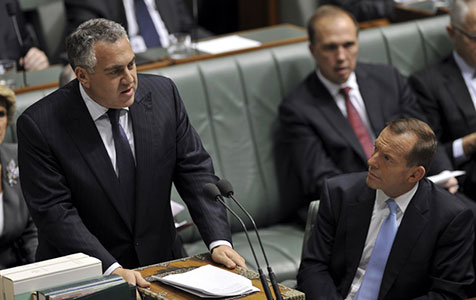 The Western Australian Liberal Party is being urged to bite the bullet and formally call on the federal government to consider major changes to the operation of the GST.

The Pearce division wants the party's annual state conference in August to ask Canberra to examine the politically sensitive issue of either increasing the current 10 per cent rate of the GST, or broadening the range of goods and services that attract the tax.

The division's conference says consideration should be given to the changes on one condition: "Only after a permanent minimum of 75 per cent of the revenue raised per capita is returned to the state in which it was levied."

The motion is consistent with the public comments of Premier Colin Barnett, but it has extra significance because it attempts to have the view endorsed in party forums for the first time. And a resolution from an annual state conference – especially from a state with such a strong Liberal representation in federal parliament – gives the move extra clout.

It is also worth noting that the federal member for Pearce is Christian Porter, the former state treasurer and attorney general, who has expressed dissatisfaction with the declining share of GST revenue being returned to WA under the formula adopted by the Commonwealth Grants Commission.

The formula is designed to achieve a notional minimum standard of services for Australians, regardless of where they live, by reallocating the GST revenue to the less-wealthy states.

All states endorsed the introduction of the GST, which came into operation in 2000 under John Howard's government. The attraction was the assurance that every dollar collected would go to the states. It was to be a true growth tax, something the states had been crying out for.

Labor treasurer Paul Keating first championed the case for a consumption tax at the Canberra tax summit in 1985. But the move collapsed when the unions got into prime minister Bob Hawke's ear. Mr Hawke then pulled the rug out from under his treasurer; and Mr Keating neither forgot nor forgave.

Mr Howard revived the plan for the 1998 election after first pledging not to introduce a GST. He won, but had to dilute his plans with a 10 per cent rate applying to a smaller basket of goods than he had proposed, to get the crucial votes of Democrats senators. For instance processed foodstuffs were included, but fresh fruit and vegetables were not. Go figure.

Not surprisingly, the states all signed up to the Grants Commission formula and were chuffed to get the extra revenue. But alarm bells started to ring in WA several years ago. As the revenue from royalties rose – linked with a huge jump in iron ore exports, strong prices, and the removal of some concessional rates – GST reimbursements started to sag.

The consequences were spelled out in the May state budget papers.

In 2012-13, WA received $2.9 billion in GST reimbursements, which was 15 per cent below the previous year. And the numbers have continued to go downhill from there. For example reimbursements this year fall to $2.2 billion and, if nothing changes, the amount for 2017-18 will be a miserly $799 million – so much for a growth tax.

Admittedly, royalty revenue is on the rise, from $4.4 billion last year to a projected $7.7 billion in 2017-18. But so is the population and demands on state-provided services such as health, education, water, public transport, roads and law and order.

Backing an increase in either the GST rate or a broader base, or both, is not without political risk. Labor would be likely to attack it (after all why support tax increases from opposition, even though you stand to reap the benefit when next in government), As noted previously, Victoria, New South Wales and Queensland all face elections over the next 15 months. Even a hint of support for a possible tax increase is usually political suicide at the ballot box.

Of course if WA were to get a better deal, it would be at the expense of one or more other states. And they would have to be compensated by the Commonwealth.

But the first step has to be taken by the WA Liberals. And that involves the state conference's agenda committee ensuring that the Pearce division's motion is actually debated and voted on next month.