Brendon Grylls’ proposal to lift the tax rate on WA’s two biggest miners may have received some bad press, but at least it has started a conversation. 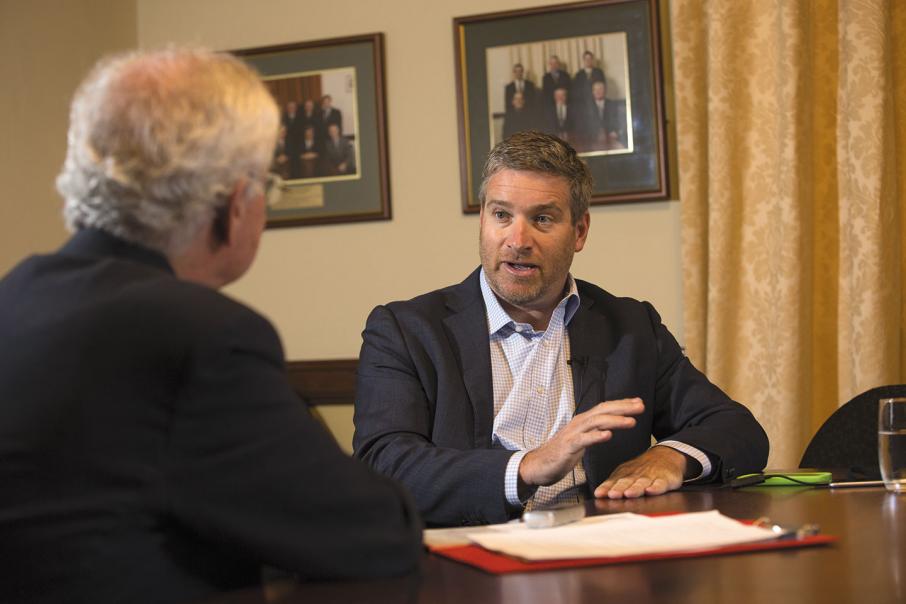 Brendon Grylls’ proposal to lift the tax rate on WA’s two biggest miners may have received some bad press, but at least it has started a conversation.

Now that the dust has started to settle after he dramatically retook the leadership of The Nationals WA on August 9, Brendon Grylls firmly believes his audacious plan for BHP Billiton and Rio Tinto to pay $5 a tonne for their iron ore has had a positive impact.

And that’s taking into account the sustained criticism of the proposal from the mining and business sector, including that it would make Australia the highest taxing country for iron ore.

“With the state’s finances as they are, you either have to cut spending or come up with a new revenue source,” Mr Grylls told Political Perspective.

“I don’t think that cutting expenditure as a risk of falling in to recession is a sound economic strategy. And that is why we have put forward a (new) revenue source.”

International business media has picked up on the story, too. The New York-based Wall Street Journal, for example, gave prominence to the hostile response from the miners. Hardly a surprise of course, but Mr Grylls is unfazed.

Neither is the Nationals leader worried by the fact that Premier Colin Barnett said the government would not accept the plan.

“The Nationals have the right in the (governing) alliance to put forward our own policy,” Mr Grylls said.

“We’ve done that, we’ve been prosecuting that. The feedback and the sentiment back to us on the ground in the electorate have been extremely positive. It will be for the premier, and the opposition, to make their policy plays in the lead up to the next election.”

So Mr Grylls has thrown the balls into the air; it’s where they land that will count as the election draws closer.

He’s made it quite clear that Western Australia’s appalling deal over the redistribution of its GST revenue has been a driving influence to correct the budget deficit and state debt projections.

“It is shameful what is happening, and we are highlighting that and, probably for the first time in quite a number of years, that’s become part of the national debate,” Mr Grylls said.

The options are clear. To correct WA’s dire financial position, the major miners should pay the increased charge – which he believes is clearly affordable even at current prices – or the GST shambles is addressed.

The Nationals leader gets some satisfaction from the assurance that Prime Minister Malcolm Turnbull gave last month at the Liberal Party WA conference that WA would get a better GST deal.

“I do know that is the first time the PM has said the GST share is unfair, that (Treasurer) Scott Morrison has called it ‘absurd’, that Christian Porter has called for a floor to be put in place … that is progress if they do it,” Mr Grylls said.

“If they don’t, that is not progress, and that is the real challenge for the federal Liberals.

“People I talk to understand the unfairness of the (current) 25 cents a tonne charge (on BHP and Rio production) never being adjusted. They are very supportive of what we are trying to do.

“They know we have a financial plan for the state and I think our support is going up because of it.”

Mr Grylls conceded that his return to the leadership, and the cabinet, had led to a rocky period in the Liberal-National alliance.

“I think it will be rocky until we both can come out – the premier and I standing shoulder to shoulder – and say this is how we are going to go forward,” he said.

“We are working on that daily.

“I will work with Colin and we will try and put together a clear policy strategy for leading the state from 2017 to 2021. I think the public wants that.”

So the Nationals leader has effectively set in place a strategy he believes will give the party’s 12 upper and lower house MPs the best prospects of re-election. He might have shocked the miners and the business sector, but if the promised GST reforms occur, the pressure is off.

But if Mr Turnbull fudges on the GST, then it promises to be a no holds barred election campaign.