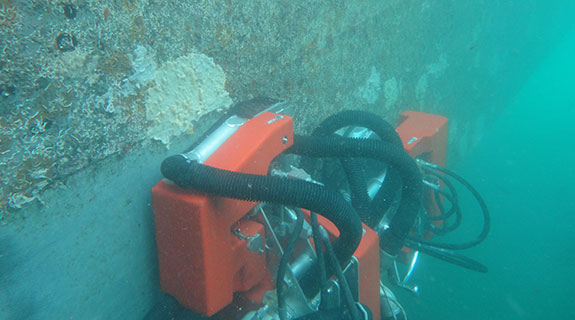 keep it CLEAN: The 1.6 metre long Envirocart unit travels along the hull.

GRD-Franmarine Holdings has spent five years developing its Envirocart technology, which passed its biggest test this year after being trialled at the Australian Marine Complex at Henderson.

Subject to gaining final certification from the Department of Fisheries, GRD-Franmarine plans to introduce its first full-scale commercial units later this year at Dampier and Fremantle.

Managing director Roger Dyhrberg said there was a massive market opportunity for the technology.

“A significant part of the world shipping fleet is available to us,” he said.

Mr Dyhrberg started working on the Envirocart technology after his commercial diving business was affected by the regulatory crackdown on in-water cleaning of ships hulls.

Many regulators around the globe have halted or restricted in-water cleaning because of the environmental risks, particularly the release of invasive species, which is a major cause of species extinction and habitat loss worldwide.

The regulatory crackdown has forced ship owners in those jurisdictions to put their vessels in dry dock for cleaning, which is both costly and time consuming.

The Envirocart is a 1.6 metre-long machine that divers guide along the hull of ships.

The fully enclosed system uses contactless blades, rather than the traditional wire brushes or high-pressure water jets, to remove biofouling, while also capturing and filtering the cleaned material.

Crucially, the system has been designed so it does not damage the anti-fouling coatings, such as copper oxide and silicon, which are applied to hulls.

The Envirocart technology has been tested and refined since 2012, when the first prototype was built.

A $1 million AusIndustry grant helped with the technology’s development, which was matched by capital invested by minority shareholders. Mr Dyhrberg has funded the balance.

The trial, undertaken by Melbourne-based consultancy ES Link Services and overseen by the Department of Fisheries and Fremantle Ports, involved the collection of 244 water samples and testing at the Chem Centre in Bentley.

ES Link’s interim report, completed earlier this year, found that the vessel released more copper sitting passively in harbour than when it was cleaned using the Envirocart.

“The estimated total release of copper from the cleaning of the entire underwater hull using the Envirocart system is less than that passively released by the active antifouling coating per day,” the interim report stated.

Mr Dyhrberg said the Envirocart system made it viable for ship owners to implement regular in-water maintenance programs so their vessels operated with clean hulls.

That would deliver substantial commercial benefits for ship owners, including reduced travel times and lower fuel consumption and carbon emissions, and also meant it would be easier to detect and eradicate any invasive species.

The market for Envirocart will get a boost in 2020, when Australian regulators are expected to adopt a clean hull policy that will require annual cleaning.

In addition to commercial shipping, the market for the Envirocart technology includes stationary vessels, such as the floating production storage and offtake (FPSO) vessels used in the oil and gas industry.

Mr Dyhrberg said the company’s strategy was to build and own the Envirocart units and lease each unit to an operator.

GRD-Franmarine’s sister company, Franmarine Underwater Services, which has been operating for 30 years, will operate the units in Australia.

The units will be leased to third parties in international markets.

Mr Dyhrberg said the company was working on multiple enhancements to the technology, including development of a remotely operated model, installation of CCTV, and ultrasonic testing so the units could undertake ship surveys while they were cleaning.

He said some of the world’s largest shipping lines were keen to trial the upgraded units.

GRD-Franmarine is working with law firm Griffith Hack to establish patents in 15 jurisdictions to ensure the company’s intellectual property is protected.