Perth-based GR Engineering Services has won a $22 million contract for enhancements to Western Areas’ Cosmic Boy processing facility at its Forrestania nickel mine. 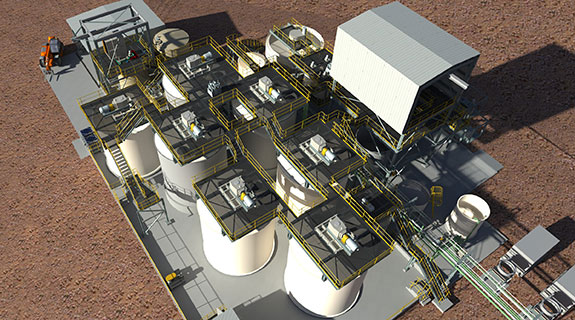 An artist's impression of the enhanced Cosmic Boy processing facility at Western Areas' Forrestania nickel mine.

Perth-based GR Engineering Services has won a $22 million contract for enhancements to Western Areas’ Cosmic Boy processing facility at its Forrestania nickel mine.

The engineering, procurement, and construction contract was awarded to GR Engineering as Western Areas announced it had approved the project's expansion, following a full feasibility study and competitive tendering process.

Detailed engineering and procurement will begin immediately, with Western Areas likely to make a final decision to begin construction later this financial year.

GR Engineering, which built the Cosmic Boy plant in 2009 and upgraded it in 2010, is expecting to earn about $7 million in revenue from the project in the first half of the 2016 financial year.

“The mill enhancement is expected to produce attractive economic returns,” he said.

Western Areas expects mill recoveries at Forrestania to increase by between 3 per cent and 5 per cent over the mine’s life, with up to 1,200 additional nickel tonnes in concentrate to be recovered per annum.

It has an estimated capital cost of $22 million, with a unit cash operating cost of $2.42 per pound of nickel in concentrate.

“Given the short construction time of six months, a decision to start construction is likely to be made later in the financial year, when consensus predictions have the nickel price trend improving towards the time the mill enhancement could commence,” Western Areas said.

“On this basis, the company believes that the mill enhancement could commence the commissioning and ramp-up phase from July next year.”