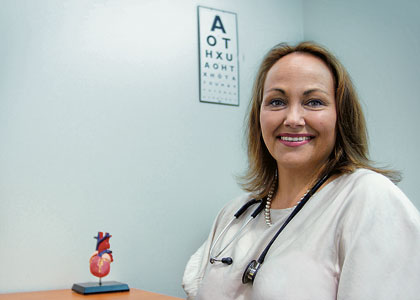 General practitioner Alanna Sandell has launched her medical practice at indigenous contractor Ngarda’s Belmont headquarters and aims to help improve the health of the wider communities the group operates in and build its growing workforce.

Dr Sandell moved to Perth from the eastern states last month and established her business, Monitor Health Check Solutions, after she was introduced to Ngarda through a local Aboriginal Medical Service and the organisations found they had similar goals for improving indigenous health.

As part of the partnership, Ngarda will provide Dr Sandell with low lease rates and she will run her practice independently of Ngarda, while providing the contractor with health services, such as pre-employment health checks and medicals for existing, new and potential employees.

The organisation’s 485-strong workforce is expected to double in the next 12 months, according to Ngarda general manager, health, safety and environment Bob Elkington.

She then plans to expand her services into communities in the north-west, with a focus on chronic diseases prominent in indigenous communities, mainly diabetes and heart disease.

Dr Sandell’s passion for improving chronic health was what drew Ngarda and Dr Sandell together.

“Ngarda’s charter is the betterment and employment of indigenous Australians,” Mr Elkington said.

“One of the main issues we have had is the work-readiness and health of the indigenous groups.

“Having an indigenous doctor creates trust and helps us with the inclusion model that we adopt through Ngarda.

“The big thing we see going forward, is programs for indigenous health, mainly in the areas of heart disease, diabetes and the normal social effects people get caught up in (such as) drugs.”

Dr Sandell recognised that cardiac stress testing was not commonly involved in pre-employment and annual check-ups for mine site workforces when she visited a mine site in Queensland.

Given the high rates of heart disease in young indigenous men, she developed an interest in establishing a business that could deliver these services to mining companies and contractors.

“That was one aspect in Perth but there is also trying to get indigenous people in remote areas fit for work and looking at their chronic diseases, trying to get them up and working in the mining area,” Dr Sandell said.

She decided to establish her business in WA because of the strength in its mining and resources industry. She is also heavily influenced by ‘holistic’ health care.

“I look at getting indigenous people into employment into reducing poverty and the cycle of poor health,” Dr Sandell said.

“When an individual goes and works on a mine site, they come back to the communities and they benefit the whole community.

“In order for that cycle of employment to continue, communities have to be looked at in a holistic way – the community, the individual and the family group.”