WITHOUT an information technology background, husband-and-wife team Ian and Vanessa Furlong had a major problem to overcome early on in the establishment of their online small business, Trade Chaser. 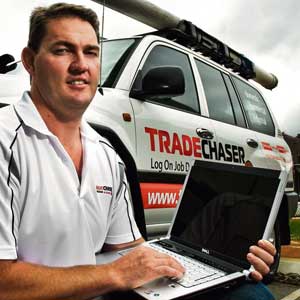 WITHOUT an information technology background, husband-and-wife team Ian and Vanessa Furlong had a major problem to overcome early on in the establishment of their online small business, Trade Chaser.

"The easy part of our business was to come up with the original concept; the hurdle was to get a web design firm to build it," Mr Furlong said.

Trade Chaser evolved from research that indicated new trade businesses often struggle to develop a strong customer base, despite the large number of customers in need of quality tradespeople.

In response, the Furlongs created a system to bridge the gap between trade businesses and customers, helping small to medium-sized businesses gain work and exposure without spending a fortune in advertising.

"We spoke with a couple of web design companies in Perth and, personally, not having an IT background made it difficult to understand the processes involved," Mr Furlong said.

Not knowing who to turn to, the Furlongs surfed the internet to source an IT provider to assist with their website design.

Through the painstaking process of reading through testimonials, the small business then shortlisted companies it deemed suitable and held meetings with them.

"We decided to run with a company that seemed passionate about our business and they had many other concepts that could be added at later stages," Mr Furlong said.

But things didn't go as the Furlongs had planned. Deadlines kept being pushed back and the next phase of development proved extremely frustrating.

"In some instances the only way to get something achieved was physically going into their office and sitting with them until tasks were completed.

"Finally, at 2am two days before our radio campaign was to launch, we received the website and began extensive testing.

"Bugs were right through the site and after a nonstop 50 hours in front of our computers we sent the first bug list back to the web designers to fix.

"This then went on for four months after launch, trying to get the website to where we wanted it."

Mr Furlong said even with the website running at 60 per cent efficiency, the decision to go ahead with radio advertising was proved correct, with a "fantastic response" through traffic to the site.

"But we couldn't capitalise on this as we spent each day trying to resolve website issues instead of focusing on the business development," he said.

"I knew we had to make a decision to find a web business that could offer the support that we required. I was told that switching web companies would be a big mistake.

"After talking once again to several national web businesses, we took control of our business and chose another local Perth company,'' he said.

"We have been fully supported by them since and haven't looked back. We are kept in the loop on timeframes and are treated like valuable customers,'' he said.

Mr Furlong said he was prepared to pay more for a new IT company in order to get the job done.

Mr Furlong said Trade Chaser had since grown rapidly, although with the economic downturn, focus had shifted from trades requiring staff to those chasing work.

"The business is now where we had envisaged it would have been back in July 2008, and with the current economic slowdown, the timing to have the website working as we want it couldn't have been better for the growth of Trade Chaser," he said.

"Being a web business we are never finished developing as we must move with technology and implement systems that give greater value to customers, and more importantly our trade members.

"Creating a partnership with a web firm that is dedicated to pointing us in the right direction has freed up more time to work on the business than in it."