Two of WA’s most successful charity events raised a total of $4.6 million this month, but not all fundraisers are achieving similar results 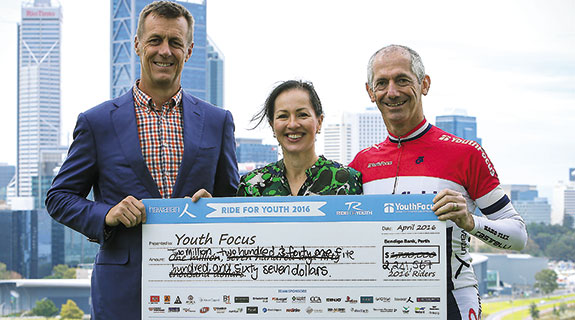 Two of WA’s most successful charity events raised a total of $4.6 million this month, but not all fundraisers are achieving similar results.

The Hawaiian Weekend to end Women’s Cancers and the Hawaiian Ride for Youth could hardly be more different, but both have achieved outstanding results.

Hawaiian Ride for Youth, by contrast, attracted 143 mostly male cyclists who completed a 700km ride from Albany to Perth.

Despite their differences, the two events raised almost exactly the same amount this month.

The Weekend to end Women’s Cancers raised $2.3 million for the Harry Perkins Institute of Medical Research.

That brought to $6.3 million the amount raised over three years.

Despite its success, the Perkins Institute is planning changes for next year, with Perkins taking over management from US company CauseForce.

It is also shifting to a one-day walk, with the minimum fundraising cut-off halved to $1,000.

Head of marketing Margaret Hayden said the institute was aiming to get 1,000 walkers participating next year.

“While it was successful, we want to take it in a new direction,” Ms Hayden told Business News.

“A lot of people wanted to be involved but couldn’t do the two days.

“The 60 kilometres was also a real challenge for the average person.

“We want it to be a positive experience all round.”

The ride also seeks to lift awareness of Youth Focus and the mental health services it offers young people and their families. 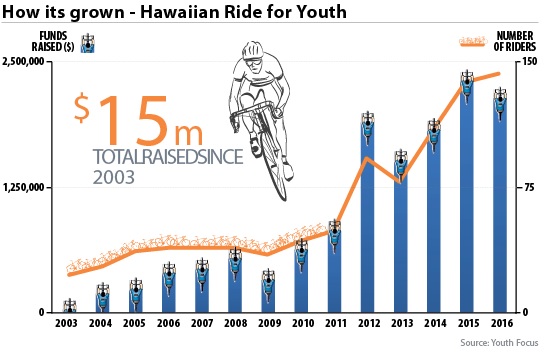 The 143 riders in the 2016 event broke into three groups for the ride from Albany to Perth, visiting 19 schools along the way and presenting to 2,400 high school students.

There were also 11 participants in the CEO Challenge, who joined the main group to ride the final leg from Mandurah to Perth last Saturday.

The Hawaiian Ride for Youth has twice been named as the best charity or cause-related event at the Australian Event Awards.

It is one of nearly a dozen charity bike rides held in Perth and regional Western Australia each year.

In terms of fundraising, the most successful is the MACA Ride to Conquer Cancer.

In four years, the Maca Ride to Conquer Cancer has raised more than $19.5 million.

Other cycling events, such as the ECU Freeway Bike Hike for Asthma, have experienced more challenging conditions.

The event has attracted an average of 7,400 participants over its 11 years, but the past two events have not reached the heights of previous years.

The Asthma Foundation WA brought promotion and marketing of the event in-house this year, after running into difficulties with its previous event manager.

Chief executive David Johnson said the foundation had great support from its sponsors, led by Edith Cowan University, and logistics manager Mellen Events, which came on board for what he said was a very reasonable fee.

“The event management was faultless, we were blessed with the best weather, and Elizabeth Quay worked really well as a destination,” Mr Johnson said.

However, the lead-up to this year’s event was difficult.

The foundation had to push back the timing of its event to April 3, after being told late last year that a competitive cycling event had been approved for the freeway on March 13.

“You can’t shut the freeway down two weeks in a row,” Mr Johnson said.

Despite shifting the timing, however, he said there was still a public backlash.

The foundation had been hoping to attract 5,000 participants but ended up with about 4,000 for the second year running.

“If you take away the numbers and the dollars raised, you would do the event anyway because it brought the community together and raised awareness of asthma in WA,” Mr Johnson said.

He said the Asthma Foundation was aiming to lock-in plans for the 2017 event as early as possible.