Functional focus at The WA Club

THE million dollar renovations to The Western Australian Club's St Georges Terrace home have been unveiled, with the fresh look hoping to breathe new life into the 115-year-old private facility. 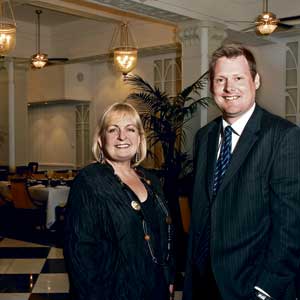 THE million dollar renovations to The Western Australian Club's St Georges Terrace home have been unveiled, with the fresh look hoping to breathe new life into the 115-year-old private facility.

Designed by architect Janine Marsh from Subiaco-based Doepel Marsh Architects, the club's new tropical colonial theme adds a lightness and warmth to the space, which has been opened up for greater functionality.

The furniture and furnishings have been chosen to reflect the new theme while incorporating traditional elements - from the original WA Club chairs in the formal dining area, to the black and white marble floors, imported palms and Italian hand-blown glass light fittings, valued at about $4,000 each.

The WA Club president Scott Cowans, who is the youngest president in the club's history at age 34, said it was important for the new design to strike the right balance between the modern and the traditional.

"We wanted to honour the heritage of the past 100 years but people wanted something a bit more modern and contemporary," Mr Cowans told WA Business News.

"It does breathe a bit of life back into the club, and it does provide a lot more benefits [to members] because of the space.

"It's a step forward in the evolving needs of members but still in keeping with the heritage."

The layout has been modified to give the club a more integrated feel and make the space more functional.

What was formerly the front lounge area has been replaced by a restaurant, which flows seamlessly through to fine dining and the newly opened bar area to the rear of the room.

One change is the introduction of a fine dining smorgasbord offering, in addition to the fine dining a la carte service, allowing members to come into the club for a quick meal while still retaining high standards.

Behind the front room is a separate lounge area, spaciously appointed with wireless internet access.

Downstairs, the club's private dining room has also received a makeover, and now incorporates a bar and lounge area which can be converted into a dining room.

The WA Club moved to its current premises almost 13 years ago, with the original fit-out also designed by Ms Marsh.

This time around, Ms Marsh said, the design was aimed at creating greater flexibility with the space while keeping with the heritage listing of the building.

"It was quite an honour [to be invited back]. We had two completely different briefs at different times of the club," she said.

"It was important to look at ways people use the club. You can come in quickly and use club, some people like to relax and enjoy the club, so these were important things to consider."

Renovations took less than three months to complete, with Masterbuilt Constructions serving as builder on the project.

Masterbuilt are also conducting renovations to the upper levels of the building, which will be leased out as commercial office space.

Financial advisers Prescott Securities have taken the lease on level three, with levels one and two yet to be leased.

Faced with mounting debts, The WA Club sold the premises in June last year to investors Tony and Maria Priolo for $8.9 million.

The owners are also looking to open a boutique bar at the rear of the building, with an entrance off Howard Lane.