There are dozens of ways to slice the latest AFL player salary statistics, but whichever way you look at them they have outpaced the common man’s equivalent. 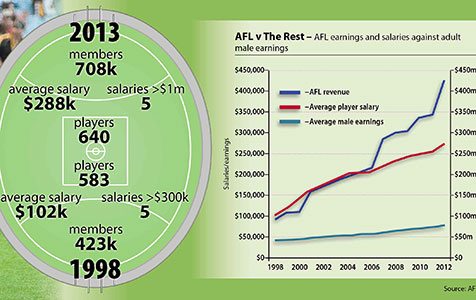 There are dozens of ways to slice the latest AFL player salary statistics, but whichever way you look at them they have outpaced the common man’s equivalent.

While the 2013 AFL numbers are just in, putting the average player salary at $288,212 across 640 sportsmen who graced the various arenas during the season, they show a continuing year-on-year trend, 6 per cent in this case, that is well ahead the average adult male’s earning power.

You don’t have to be Buddy Franklin scoring a $10 million deal to switch to the Sydney Swans to get ahead as an AFL player. Even players at the bottom end of the ranks have done better in terms of earnings growth than the average bloke in the past decade and a half as the sport has proved it has a winning formula.

While there are many reasons for rising revenues and salaries in sport, there is no doubt the AFL is the most successful sporting code in Australia.

The reason I raise this is not to praise football but to highlight that fact that organised labour can work for the common good.

The AFL is a collection of interests that is simply unmatched in most facets of society. The employees, employers and the key industry associations have agreed to terms that have given the sport the ability to outmuscle rivals; although to be fair, many alternative sports in Australia have similar arrangements.

As the graph shows, the biggest concession has been from the players, although I admit they are not alone.

Professional players have agreed that it is in their interests to cap salary payments, an arrangement that tends to restrict the ability of wealthier clubs from using their financial power to acquire or retain star players and, therefore, dominate the competition by controlling the talent. The best players still get paid more, but they have definitely sacrificed income for the greater good.

Players have also agreed to terms that allow the weakest-performing clubs to choose the best young players. That helps weaker clubs – the employers –perform better on the field and, if directed well, emerge to rival the current champs. It is cyclical and deliberately designed to be so, albeit some clubs do better at managing the cycle than others.

Furthermore, they have done this without restricting growth in the employer base (there are more clubs), have accepted skilled workers from other jurisdictions (code switching), and foregone strikes.

These employees have played the long game and it quite astounding that a bunch of professional sportsmen with relatively short careers ahead of them have acquiesced to this strategy. Perhaps they realise that an enduring industry offers them greater opportunities beyond what their short-lived on-field skills will provide. Some might suggest they have been sold a vision.

In industry, in Australia, we have seen this position reversed. Employees and employers have done deals that have provided short-term outcomes and done long-term damage.

It is easy to point the finger at protected sectors such as the car industry and airlines as examples, but they are not alone.

For instance, the oil and gas sector – workers and employers – have done themselves a long-term disservice by agreeing to crazy wage rates and ridiculous workplace conditions that have, for all intents and purposes, priced themselves out of the market.

I don’t advocate an industry wide cartel-type structure like the AFL, but I do highlight how restraint by all parties has led to long-term success. The accompanying graph shows that the players’ salary growth has not matched the clubs’ revenue increases. In other sectors this inequality of earnings might be fuel for labour agitation, but in AFL is recognised for what it is – part of collective success.

Perhaps that can’t last forever. But what recipe for success ever does?

For the time being, though, it is worth acknowledging that the labour side of the equation has been the most restrained but still finds itself well ahead on life’s scoreboard – with a future.