Frocking up in the big house

INNOVATIVE fundraising events are becoming increasingly important for benevolent organisations in light of the decline in income from traditional fundraising appeals, as reported in last week's WA Business News. 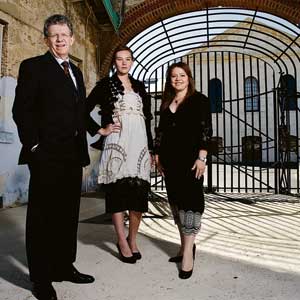 INNOVATIVE fundraising events are becoming increasingly important for benevolent organisations in light of the decline in income from traditional fundraising appeals, as reported in last week's WA Business News.

Fashion parades, fun runs, bike rides and swimming marathons are just some of the fundraising events that have won support from the Western Australian community.

The Asthma Foundation of WA this month will host a fashion show in the unique setting of Fremantle Prison to raise money to support the 225,000 Western Australians living with asthma.

She said the event, which generated $8,000 last year, was designed to capture people's appetite for fashion and this year would showcase emerging and established local fashion talent with labels such as Ashe, Morrison, Love in Tokyo and Empire Rose.

Asthma Foundation of WA chief executive John Gummer said the charity had been involved in hosting fashion fundraising events for some time and that the shows were a great vehicle to raise money.

"As a contemporary celebration of fashion, Jailhouse Frock is designed to be a more sustainable income stream for the Asthma Foundation of WA," he said.

"It is always a challenge to develop a new fundraiser, however, with a fantastic display of support from local industry and the broader community, the 2008 Jailhouse Frock event was a great success.

"Most importantly, the event provides a platform for the Asthma Foundation to raise awareness about asthma in Western Australia. This is particularly important with this demographic from the event, who are often complacent about asthma.

"Like the HBF Freeway Bike Hike for Asthma, which saw 8,000 cyclists take to the freeway for a fundraising bike ride (on March 22), we anticipate the Jailhouse Frock event to grow over the coming years."

Mr Gummer said the fundraising component of the event was extremely important, with all proceeds from Jailhouse Frock - projected to reach $16,000 - supporting the charity's services.

On a larger scale, Perth is also home to one of the biggest officially timed mass participation events in the Southern Hemisphere - the City to Surf Fun Run - which was created by Jolimont-based disability services provider Activ in 1973.

Attracting a record 37,000 participants in 2008 and signing Rebel Sport as its naming rights sponsor, the City to Surf has become a major attraction to interstate visitors and a community highlight on the WA calendar.

The inaugural City to Surf, which began as a vehicle for fundraising, attracted only 500 people, but the event has grown substantially during the past 33 years, netting Activ more than $400,000 in 2007.

A key factor for awarding Hawaiian Ride for Youth was the multifaceted aspect of the event, which interacts with the communities it passes through, particularly schools.

Since 2004, The Rotary Club of Perth's Great Bike Ride has become one of Perth's largest mass cycling events, featuring more than 5,000 cyclists raising money for the Heart Foundation, St John of God Foundation and Hope for Children.

The Rottnest Channel Swim is another big community event organised by a not for profit group.