Fringe on track for strong showing

Ticket sales for the 2014 Fringe World Festival are tracking ahead of levels at the same time last year, with event organisers confident of bettering the record revenue from the 2013 festival. 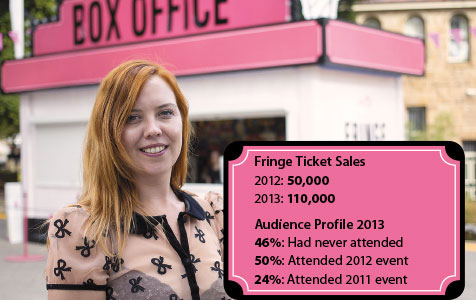 IN CHARGE: Amber Hasler is leading the Fringe World Festival for the first time as director. Photo: Attila Csaszar

Ticket sales for the 2014 Fringe World Festival are tracking ahead of levels at the same time last year, with event organisers confident of bettering the record revenue from the 2013 festival.

Fringe World will this year feature more than 450 events, and will run for a month from this Friday.

In her new role as festival director, Amber Hasler told Business News ticket sales were already above what they were at this time last year.

“People have really responded with getting in early and I think a lot of that has to do with people being worried that they’re going to miss out and that shows will sell out,” Ms Hasler said.

It’s the third year the festival has been run in its full format following a rejuvenation and pilot season in 2011.

Ms Hasler, who has replaced Marcus Canning as director, declined to estimate ticket sales for this year’s event but said she was confident it would be an increase on 2012.

For the second year the festival is being extended to regional Western Australia with Outer Fringe events to be held in Geraldton, Albany, Esperance and, for the first time, Bunbury.

“It’s taking a taste of Fringe or some of the true Fringe experiences we have here during the festival out to the regions,” Ms Hasler told Business News.

“It’s a great opportunity to local, national and international artists to see more of the regions … it was an excellent response last year and was really well received.”

Ms Hasler said the organisation had aspirations to extend the festival even further in future years and take it’s Speigeltent to other WA locations, but there were no plans to go interstate.

“Once we continue to present programs in these four towns for 2014 we’d really like to establish a long-term connection and a touring circuit with other town centres.

“Fringe is very much about WA and enriching the cultural, social and economic impact for Western Australia.”

In Perth, the festival has been extended beyond its traditional home in the Perth Cultural Centre to Northbridge’s Russell Square, home of the Pleasure Garden.

Among the various other venues secured to host events is the Piccadilly Cinema, which closed late last year.