Year-on-year growth and a desire for sustainability mean Fringe World organisers are in no rush to scramble for the philanthropic dollar. 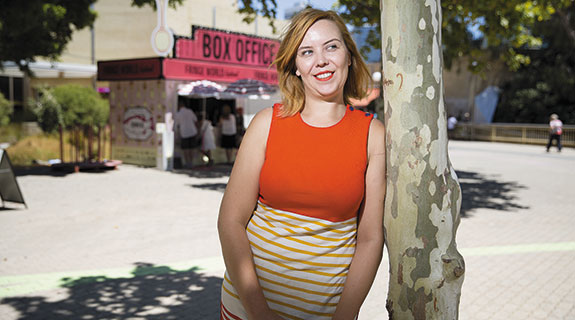 Year-on-year growth and a desire for sustainability mean Fringe World organisers are in no rush to scramble for the philanthropic dollar.

As Fringe World prepares to launch for a fourth year in Perth, organisers are aiming for a change of pace from the rapid and dramatic growth the event has undergone during the past three years.

Ticket sales were up more than 40 per cent on the previous year for the 2014 festival, with organisers recording 154,366 attendees at ticketed events.

While organisers aim to surpass these figures in 2015, Fringe World director Amber Hasler said the aim was now to stabilise the event to maintain its quality.

“I think that sudden growth and such dramatic growth that we’ve seen in the previous three years, we didn’t want to get lost on that (while) striving for growth,” Ms Hasler told Business News.

“We’re really at a great point where we’re quite established, we have an excellent reputation, audiences are really enjoying what we’re doing and I think it’s a great opportunity to stabilise that so it’s there for a really long time.”

While not keen to discuss projected numbers, Ms Hasler said ticket sales were up on the same time last year, ahead of the month-long festival, which kicks off on January 23.

However, the decision to pull back from rapid growth doesn’t mean organisers are taking a backward step in terms of the festival’s offering.

New inclusions for the 2015 calendar of events include an expansion of the Outer Fringe tour, where performers visit regional communities in Western Australia to showcase a sample of Fringe World festival acts.

Performers will visit six new communities in regional WA, following the popularity of last year’s tour, which reached a total audience of 4,937.

Along with an expanded line-up, 2015 marks a milestone for Fringe World, with the producing organisation behind the festival, Artrage, shifting its focus exclusively to Fringe World and its closely aligned programs such as Outer Fringe and Rooftop Movies.

The event’s 2014 impact report takes this, and other, changes into account when determining Fringe’s growth and financial targets.

Among these is the divestment of its year-round Northbridge venue, The Bakery, with the extended lease to expire in May.

The report suggests this and other changes in funding and operational costs in 2015 will lead to a shortfall variance in annual cash flow of almost $2 million.

Along with the aim of sustainable growth, the 2014 impact report recommends Fringe will require an increased level of private sector support, with an aim to reach 15 per cent of income from corporate sponsorship.

Philanthropy, however, is not a focus for Fringe World, according to Ms Hasler.

“For us it’s about being able to connect with established organisations and companies that reflect and engage with what we do,” she said.

“Philanthropy and private partners hasn’t been a focus for us … it’s not a part of what we do.”

However, she didn’t rule this direction out for the future.

“That doesn’t mean to say it’s not important or part of future festivals and future streams of the organisation,” Ms Hasler said.

The philanthropy funding options have proved successful for Perth International Arts Festival in past years, despite the festival calling for last-minute contributions in November.

Piaf general manager Julian Donaldson told Business News the festival was on track to reach its target by the time it starts on February 13, or just after.

He said despite philanthropic revenue being small in comparison to corporate and government support, it was essential for the future of the event.

“While it’s small, it is growing and over time will become more and more important to our festival and to other arts organisations, who need to have diverse income streams and private support,” Mr Donaldson said.

“For this festival we’re confident that we’ll do at least 180,000 in terms of tickets sold.”

With ticket sales for Fringe rapidly approaching those of the Piaf, Ms Hasler said a future collaboration couldn’t be ruled out.

“It would be wonderful to look at ways the two festivals can create something really special for audiences,” she said.