Frigates to be maintained in Henderson

The federal government has signed a $2 billion contract with a group of defence contractors that will ensure maintenance of ANZAC class frigates continues at Henderson for the next eight years. 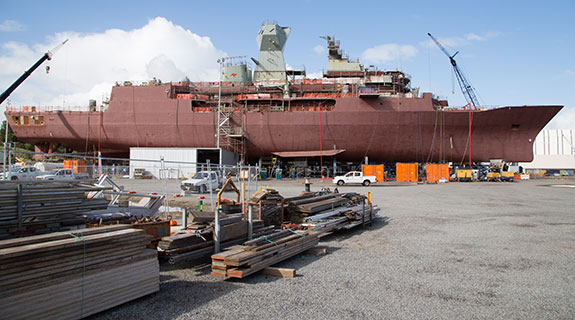 Construction of an ANZAC class frigate at the Australian Marine Complex in Henderson.

The federal government has signed a $2 billion contract with a group of defence contractors that will ensure maintenance of ANZAC class frigates continues at Henderson for the next eight years.

A partnership between BAE Systems Australia Defence, Saab Australia and Naval Ship Management Australia (a 50:50 joint venture between UGL and Babcock) will work with the Commonwealth under several streamlined contracts for the maintenance of the frigates.

The contract has a value of $2 billion for the first eight years of work, with the frigates expected to remain in service for at least 15 years.

The majority of the work will be carried out in Henderson at the Australian Marine Complex, while other components of work will be undertaken at Fleet Base East in Sydney.

“Companies at the Australian Marine Complex have consistently proven their ability to win and deliver maintenance and upgrade projects for the navy,” he said.

UGL said in a statement that an initial five-year period of work under the contract would generate over $500 million in revenue for its joint venture with Babcock, with UGL to receive half of that.

Chamber of Commerce and Industry of WA director of policy Dale Leggett said the announcement was a huge win for WA and would ensure returns for generations to come.

“This $2 billion contract will cement Western Australia as a national leader in defence and will allow WA to deliver the highest standards of excellence for the Commonwealth and the Royal Australian Navy,” he said.

“This contract will also diversify WA’s economy by boosting our maritime and manufacturing industries and by creating hundreds of new jobs and opportunities for WA businesses.”

It follows news earlier this week that the Commonwealth had awarded French company DCNS a $50 billion contract to build 12 submarines for the RAN, with hope remaining that WA will benefit from portions of the work carried out within the state.

It also follows the announcement last week that Austal was the preferred bidder for the construction and maintenance of up to 21 replacement steel-hulled pacific patrol boats.