“In the west, we all know this story. Sort of.” 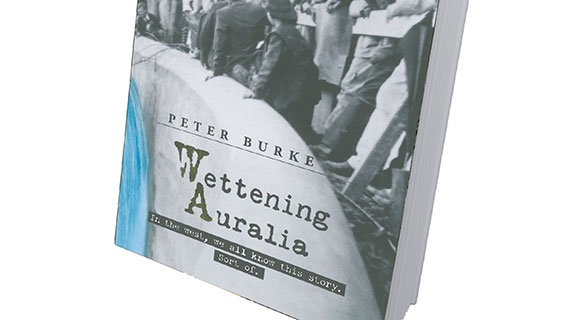 “In the west, we all know this story. Sort of.”

As the subheading on Perth author Peter Burke’s book Wettening Auralia suggests, most of us who live in Western Australia know the basics of the water pipeline to the Goldfields built at the turn of the century.

The tremendous cost, the risk of new technologies used, and the political pressure brought to bear on the scheme’s designer, Charles Yelverton O’Connor, who took his own life a year before the project’s successful conclusion, form the skeleton of history that is often otherwise ignored.

Burke takes these bare bones and writes a book that is best described as a historical dramatisation, building the story with chapters focused on, in most cases, people bound to the scheme through politics, work or family.

It’s an eccentric way to structure such a tale, yet I enjoyed it immensely and was absorbed by the details of places and names, many of which would be familiar to any local.

What I also enjoyed was the didactic approach to many of the themes; the power of the press, the potential for corporate corruption, labour’s opposition to technological innovation, and the dreadful destructiveness of political opportunism.

The author reminds the reader that despite all the nostalgic calls for a return to a more civil era in politics, the past was little different from the problems of today.

If anything, these things were worse at the end of the 19th century, well before Facebook and the 24-hour news cycle were invented.

Those who deride WA as a technological backwater ought to consider the monumental political struggle faced by the backers of the pipeline project, after they had solved the technological issues, often with ideas patented here.
This was a significant engineering feat at the time.

Enemies abounded because the project was backed by premier John Forrest, who was holding out for better terms in the proposed Australian federation, a position that jarred with the newly arrived populace of the Goldfields. Many miners were from the eastern colonies and viewed Perth with distrust, a situation exploited by newspapers and politicians who could see additional power for themselves with a breakaway colony of Auralia.

It ought to come as no surprise that in those times, even more than now, a newspaper background was common among those elected to represent WA in the new Australian federation as well as in the state’s existing parliament.

It’s hard to imagine labour representatives and their friends in the media damning the introduction of WA-developed machines that made the pipeline safer and faster to build and reduced the long-term cost to run.

Then again, there are plenty of examples of such things today. Resistance to change is often packaged up as nasty cost cutting that will lead to job losses.

Similarly, Burke outlines the politically sensitive battle between using costly and slow department day labour, or contracting out to private companies that were exploiters of the workers. It all sounds so depressingly familiar.