Peter Quinlan spent plenty of time listening during an appearance at ‘Justice Reinvestment’ earlier this month, a panel discussion hosted by the Committee for Economic Development of Australia. 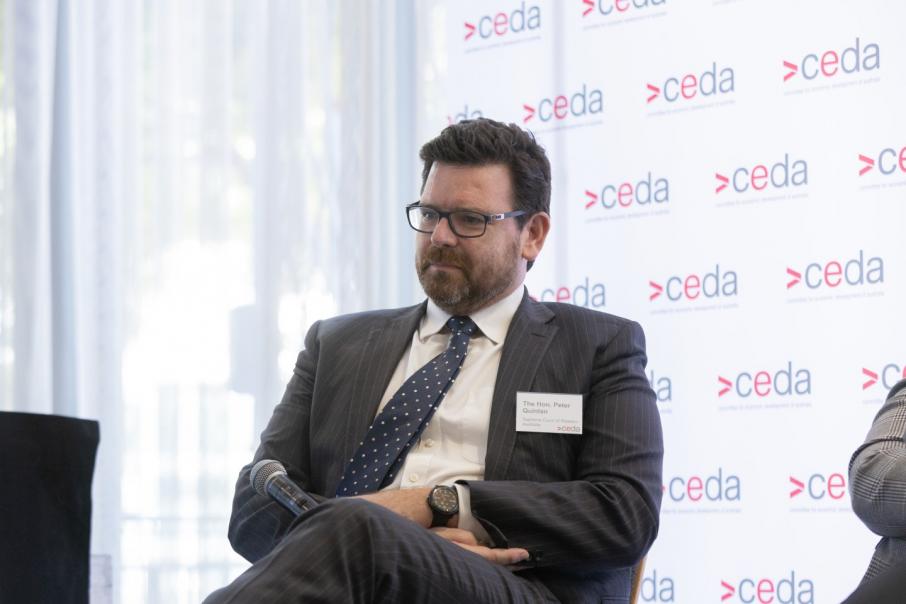 Prominent figures from law and business spoke at a recent event in Perth, advocating the economic advantages of justice reform.

Peter Quinlan spent plenty of time listening during an appearance at ‘Justice Reinvestment’ earlier this month, a panel discussion hosted by the Committee for Economic Development of Australia.

The primary topic under discussion was the economic benefits of reducing the rate of imprisonment in WA.

Due to his position, Justice Quinlan was frequently precluded from the conversation, unable to comment on issues raised that focused on political aspects of reducing imprisonment.

Eventually, Mr Quinlan spoke up, and, eager to reframe the discussion, leaned back to gesture at the CEDA signage behind him to make his argument.

“This event has been hosted by the Committee for Economic Development of Australia,” Justice Quinlan said.

“It’s [the seminar] got investment in the name; we’re holding it at KPMG.

“I think that part of the messaging is prosecuting the argument that these are economic issues as much as they are social issues.”

Imprisonment presents as an issue of comparatively outsized importance for WA, with data from the ABS showing the state with the second highest rate of imprisonment in the nation, at 341 per 100,000 adults incarcerated.

The problem is even greater for Aboriginal and Torres Strait Islanders, who in WA are imprisoned at the highest rate nationwide at 4,058 per 100,000 adults of the population incarcerated.

While those figures suggest imprisonment is a major social issue in WA, it carries economic costs to both the state and Australia as a whole, with data from the Productivity Commission finding public spending in real terms on prisons totalled $4 billion nationally and $661 million in WA in the year to June 2018.

Justice Quinlan emphasised the cost of imprisonment in his own remarks, mentioning efforts in the US state of Texas to reinvest into its imprisoned community as an example of how to best tackle the issue.

Texas’s decision in 2007 to forgo spending $500 million on building prisons and instead spend $240 million on other correctional services was estimated to have saved the state $433 million overall, while also leading to a reduction in its imprisoned population.

Though Justice Quinlan conceded that prison reform was often considered a social issue, he argued the public cost of imprisonment was a more compelling argument.

“The great irony of course … is that in the US, prison reform got under way under the Republican Party in states like Texas for economic reasons,” Justice Quinlan said.

“It was simply costing too much.

“There are different ways of framing a particular approach so it meets all the interests the community has.”

In the private sector, services company Serco, which employs 2,250 people in WA and operates Yongah Hill Detention Centre, Acacia Prison and Wandoo Reintegration Facility, has attempted to curb these issues through its alternative justice program.

Directed by Ms Sandas, the program focuses on building correctional alternatives to imprisonment, and will aid efforts by the NSW government to reduce recidivism by 5 per cent by 2023 through instituting early intervention programs and developing residential alternatives to prison.

The program was founded in 2018, and Ms Sandas hopes to implement similar alternative justice in Acacia Prison should efforts in NSW prove successful.

Ms Sandas, who made a point of noting her own time spent in prison as a youth, framed the program as an example of what private businesses could do to reduce the economic and social costs of imprisonment, saying there was value in private prison operators helping to rethink how prisons worked.

“My take on the criminal justice system is that sometimes, positively, it can be the first time someone is afforded a positive intervention, support and care,” Ms Sandas told the forum.

“I don’t advocate to move the needle and say to decriminalise non-violent offenses; I would say that would be a barrier to positive intervention.

“I would say [the solution is] not to perceive some things like substance abuse for what they are, criminal or non-criminal.