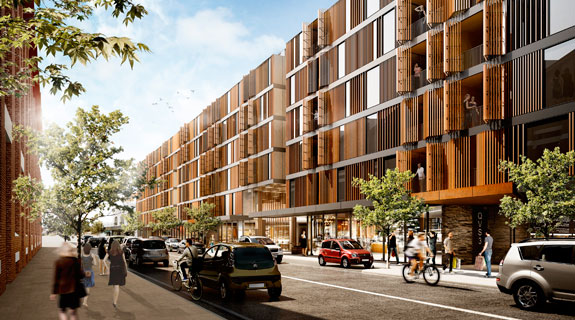 The rejuvenation of Fremantle’s dilapidated and neglected east end has been given a boost, with Defence Housing Australia lodging plans for a 166-apartment project on Queen Victoria Street.

The project is also in close proximity to two other apartment developments – Match and Sirona Capital’s restoration of the historic Wool Stores building, colloquially known as the Fort Knox storage warehouse, and Property Matrix’s 11 QVS, which comprises 45 dwellings being built by Pindan.

The City of Fremantle has been actively encouraging development in the east end since 2011, when it adopted a strategy to redevelop a series of prominent sites in efforts to boost the residential population of the port city, which would provide flow-on effects to its CBD economy.

DHA managing director Peter Howman said the new project provided a good opportunity to capitalise on the rejuvenation efforts in the east end of Fremantle.

“With each of our developments we try to look at ways to enhance the local community – not just for Defence members and future residents but for the wider community,” he said.

“I’m particularly pleased about the way the design of this development will revitalise this area and improve community amenity connecting Queen Victoria Street and the existing residential community through a public walkway as well as creating spaces where they can interact and enjoy leisure activities.”

The project has designed by Hassell and will comprise three buildings, from four to seven storeys.

If approved, DHA is aiming to begin building by the end of the year, with completion expected in late 2017.

That project also includes the construction of six new townhouses.

Developing significant apartment projects can be seen as a change of tack for DHA, which has previously relied on existing housing stock to provide homes for Defence Force members and their families.

The agency has more than $1 billion of works in its development pipeline across Australia, including six projects in Western Australia; two in Fremantle, and others in Claremont, Innaloo Rockingham and Swanbourne.

In Rockingham, initial planning is under way for an apartment development on the Palm Beach Caravan Park, with a public comment period expected to open shortly.

In Swanbourne, DHA has lodged plans with the Western Australian Planning Commission for a redevelopment of Seaward Village, with an improvement scheme expected to be lodged in October.

The Swanbourne project will comprise 165 new homes for Defence members and up to 160 lots for private sale.

In Claremont and Innaloo, DHA has a memorandum of understanding in place with the Department of Housing to develop up to 55 affordable homes across two government-owned sites.