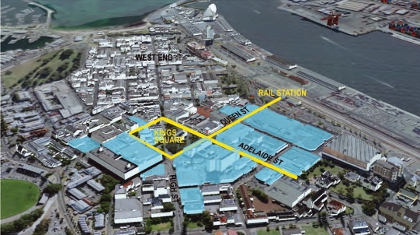 NEW FREO: An aerial view highlighting the focus of the planning amendments. (Photo: City of Fremantle)

The City released a planning scheme amendment for public comment today, which identified 12 sites that would be capable of support development of such a scale for the City to achieve the objectives set out in a strategic plan tabled in July.

The amendment focuses on the area around Queen Street between the Fremantle Railway Station and Kings Square.

Fremantle council is aiming to increase office space in its CBD by 70,000 square metres, add 20,000sqm of retail space and provide 1,500 new dwellings.

Fremantle Mayor Brad Pettit wrote to Fremantle residents advising them of the amendment, stressing that the council would not allow characterless high-rise, despite two sites being permitted to develop up to nine stories if developers meet certain conditions.

The maximum nine storey developments would only be approved for two sites close to the train station that satisfied strict performance criteria, including provision of public open space.

Mr Pettit said the redevelopment focus was on the underdeveloped and unloved relics of the 1960s, 70s and 80s, including the Myer Building, Coles Woolstore and Westgate Mall sites.

Earlier this month Fremantle Council signed a memorandum of understanding with the Myer building's owner, Sirona Capital, regarding the $80 million redevelopment of the site.

“There has already been lively public debate surrounding these proposals and this is healthy given we are proposing a significant urban renewal focus,” Mr Pettit said in his letter.

“A lot of the debate has revolved around whether this type of urban renewal will rob Fremantle of its character, that new buildings will detract from the visual landscape and public spaces; or concern that some heritage buildings may be affected by development activities.

“I want to assure you that no heritage buildings will be threatened by Fremantle’s revitalisation plans.

“In fact, the City of Fremantle will be aiming to make any new developments the heritage of the future.”

The City of Fremantle will hold a presentation and discussion forum on Monday night, at the Victoria Hall.