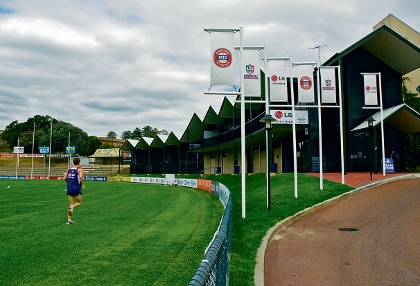 The City of Fremantle has plans to upgrade the Dockers' training facilities at Fremantle Oval.

The City of Fremantle has moved to keep the Fremantle Dockers at their spiritual home in the port city, progressing plans to redevelop the Stan Reilly Centre on South Terrace.

The proposal involves construction of new training facilities for the Dockers, a health sciences department for the University of Notre Dame as well as community and commercial space.

Mayor Brad Pettit said the city was committed to providing the Dockers with a world class training track and was confident the football club would remain in Fremantle.

“We are well-advanced in plans for the site and have funding arrangements in oplace as part of our recently adopted 2012/13 budget to expedite this process,” Dr Pettitt said.

“The City’s redevelopment plans for this site have been going on for some time and we have had very positive discussions with the Fremantle Football Club and the University of Notre Dame Australia in this time. “

Dr Pettitt said the Dockers had advised the City that they were pleased with the direction of negotiations, and the proposal met their requirements.

“We are now at the point whereby we are ready to move quickly when I final board decision to remain in Fremantle is made,” he said.

Dr Pettitt said the progress at the Stan Reilly centre should head off attempts by the City of Cockburn to poach the Dockers from their Fremantle Oval headquarters, and move them to a $50 million facility at Cockburn Central.

Cockburn’s plan, announced in May, involves the construction of aquatic and recreation facilities, including an AFL-sized oval.

“The redevelopment plans will satisfy all of the club’s training and administration needs – with this in mind I see no reason why the Dockers wouldn’t stay in Fremantle and reward the local community, Fremantle supporters and members with a premiership in the not-too-distant future,” Dr Pettitt said.

The state government, as the owners of the Stan Reilly site, will make the final decision on future development