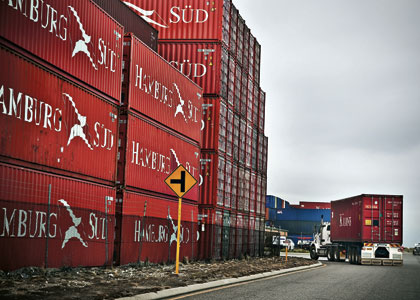 MOVING GOODS: The efficiency of land transport – road and rail – is one factor that will determine when Fremantle’s inner harbour reaches capacity. Photo: Grant Currall

TRANSPORT Minister Troy Buswell has signalled a shift in government thinking on the long-term future of Fremantle harbour, saying it would be “about 2025” before the inner harbour reaches capacity.

That is substantially later than previous estimates and could have a large bearing on transport planning.

In particular, the projections could influence when the government proceeds with new port facilities in the outer harbor at Cockburn Sound, which is meant to accommodate the long-term growth in the state’s container trade.

In last month’s state budget, the government postponed $157 million of port authority spending by two years, mostly on land acquisitions and dredging for a second shipping channel for the outer harbour development.

It did not explain the two-year delay, other than saying it was one of several savings taken to support its budget strategy.

Appearing before a parliamentary estimates committee last week, Mr Buswell also played down the prospect of getting substantially more port-related freight onto rail in order to ease traffic congestion in the area.

He said the government’s target for next year was 14 per cent of freight onto rail, and described the long-term goal of 30 per cent – a figure originally set by the former Labor government – as an “aspirational target”.

“One of the big problems is the size of the cost difference between using rail versus road because of the short haul and a lot of inefficiencies in the system,” Mr Buswell said.

The government and the port authority are in the midst of several measures to improve rail-handling efficiency.

This includes construction of a longer rail terminus at the expanded Rous Head industrial area, a new rail loop, and an intermodal terminal at Kewdale.

“The impact of that will not be felt until four years when the infrastructure adds to the efficiency of the rail network,” Mr Buswell told the committee hearing.

The port authority is also working with users at the port to improve the efficiency of trucking movements.

QUBE Logistics, for instance, has started a new system this week that is meant to streamline the handling of empty sea containers.

Its new system will allow transport operators to choose the type of transaction (dehire or collection), check the container park’s ability to provide the required service at the chosen time, and then confirm arrangements.

A similar system is already in use at some small container parks in Fremantle.

The efficiency of land transport – road and rail – is one factor that will determine when the inner harbour reaches its capacity.

Another factor is the growth in container traffic. Currently the port handles about 650,000 TEUs (standard container units), and the port authority estimates capacity is likely to be about double that.

“The scary thing is that, by 2060, it is anticipated that the container movements through Perth will be about six million TEUs,” he said last week.

The WA Planning Commission has been charged with reviewing options for the outer harbor, much to the frustration of Len Buckeridge-backed James Point Pty Ltd, which has been trying for more than a decade to develop its own port facilities, after signing a deal with the Court government.