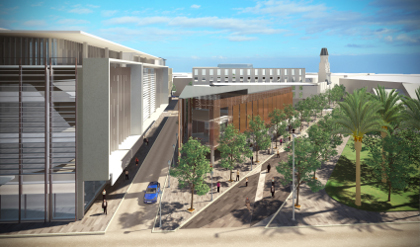 An artist's impression of a redeveloped King's Square.

The City of Fremantle moved a step closer to kicking off works on a $220 million revamp of King’s Square, with the council approving a plan put forward by development group Sirona Capital at a special meeting last night.

The plan is centred on a redevelopment of the Myer building into commercial office space, with the department store having vacated the premises after ceasing trade in the past fortnight.

A number of city-owned sites will also be redesigned under the proposal, including the council offices and library, the vacant Spicer site, as well as the Queensgate Centre and Queensgate Car Park, which will be sold to Sirona.

In response to concerns regarding a lack of residential development in the current proposal, the council said housing remained a possibility, although its preference would be for a hotel to be built on site.

The city will also explore conducting an architectural competition to assuage concerns about the design of the buildings shown in artist’s impressions of the redevelopment.

The redevelopment is part of a wider effort to improve the Fremantle CBD, with council aiming to add 20,000 square metres of retail area and 70,000sqm of office space to attract more people to live and work in the port city.