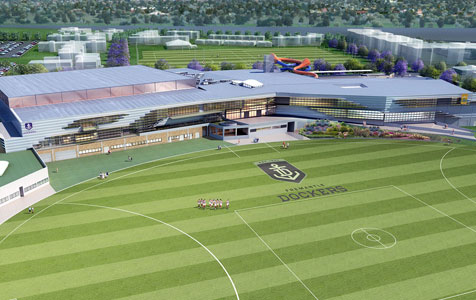 An artist's impression of the Dockers' training facility.

The Fremantle Dockers will take another step towards moving out of their traditional heartland later this week, with the $107 million aquatic recreation centre joint venture with the City of Cockburn and Curtin University set to be given the green light for development.

The project has been in the pipeline since September 2012, while the Dockers signed a heads of agreement with the City of Cockburn in December last year to move from their Fremantle base.

Along with state-of-the-art training facilities and a new team shop for the Dockers, the facility will also include a multipurpose indoor sports hall with six courts, an indoor and outdoor pool, as well as gymnasium facilities for Cockburn residents.

The indoor and outdoor pool areas will be linked by a pair of water slides, while Curtin University’s facilities will include administration and office spaces, testing rooms and laboratories.

The community facilities will include indoor and outdoor pools with waterslides, as well as a recreation hall and playing fields.

The DAP said in its meeting agenda that the facility has been well designed by Sandover Pinder Architects, and it would contribute greatly to the vibrancy and sustainability of the area.

The development application was compiled and put forward by NS Projects.

The approval will follow the West Coast Eagles signing a 50-year lease for its new facilities at Lathlain Park last month.

The Town of Victoria Park approved the agreement at its monthly meeting on September 2.

The lease also includes an option for a further 49 years.

West Coast is planning to move to the facility before the opening of the new Perth Stadium in 2018.

West Coast’s $60 million facility will include two full-sized ovals, one in the same dimensions of the MCG, and the other shaped like the proposed Perth Stadium.

The future of West Coast’s current base – Patersons Stadium in Subiaco – is unclear, after Premier Colin Barnett said last month he didn’t see a future for football at the historic venue.