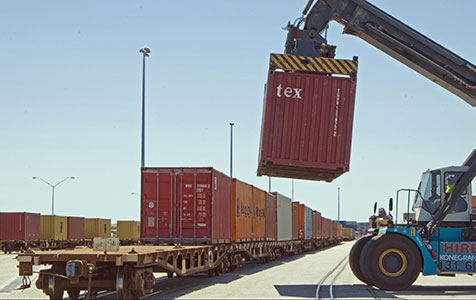 The North Quay rail extension, due to be completed in mid 2014, will allow for longer trains to use the line, reduce the time trains take to enter and leave the port, and decrease train loading and unloading times.

An increase in train capacity is expected to reduce the number of trucks entering and exiting Fremantle Port and reduce the current bottleneck effect.

The project, which is being jointly funded by the state government ($12.4 million) and the Commonwealth ($18.6 million), is costing $31 million.

The extension of the North Quay railway line will take the existing rail terminal from its current 400-metre length to 690 metres, providing enhanced access to DP World's container terminal.

Transport Minister Troy Buswell said the extension was designed to increase capacity, efficiency and productivity at the busy port.

‘‘From just 2 per cent in 2002, rail now has a 14 per cent share of the container movements to and from the port and the volume of containers currently on rail reduces truck movements by some 72,000 trips annually,’’ he said.

Intermodal Link Services, which is the operator of the North Quay rail terminal, has forecast strong growth in rail volumes over the next five years that it holds the operating contract.

The state has a target of achieving a rail share of 30 per cent for Fremantle's container trade.