Curtin University students will be given unprecedented access to the Fremantle Dockers in an alliance signed today, which also aims to connect the football team with academic staff. 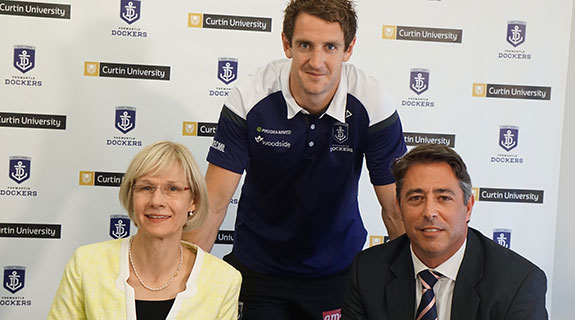 Curtin University students will be given unprecedented access to the Fremantle Dockers in an alliance signed today, which also aims to connect the football team with academic staff.

Under the alliance, students of media, exercise science and sports medicine will gain training opportunities, including at the Dockers’ $106 million Cockburn Central West facility currently under development.

Staff and students at Curtin will also collaborate on projects with the Dockers related to public health, Aboriginal outreach and international student engagement.

Fremantle Dockers players and staff will receive access to Curtin’s academic staff and research, particularly in exercise science and physiotherapy.

Dockers chief executive Steve Rosich said following partnership activities between the football team and the university over the past 12 months, the club was looking forward to growing the alliance.

“It is very much a two-way street, with significant benefits to both Curtin University and the Fremantle Dockers,” he said.

“The ability of the club to provide real world experience for Curtin students and for our players and staff to benefit from the university’s academic expertise and research capabilities exemplifies that.”

Curtin University vice-chancellor Deborah Terry said the alliance, which also aimed to close the gap with educational and sporting opportunities for Aboriginal communities, was mutually beneficial.

“I am delighted that two iconic WA brands are joining forces to create valuable, real-life experiences for our students while providing Fremantle Dockers staff with access to Curtin’s cutting-edge research”, she said.

One of the first programs to be rolled out will be Curtin film and TV students providing video and website copy for the club’s football panel show, Docker TV, and its website.

Plans are also under way to place four Curtin media master’s students at the Fremantle media and communications department.